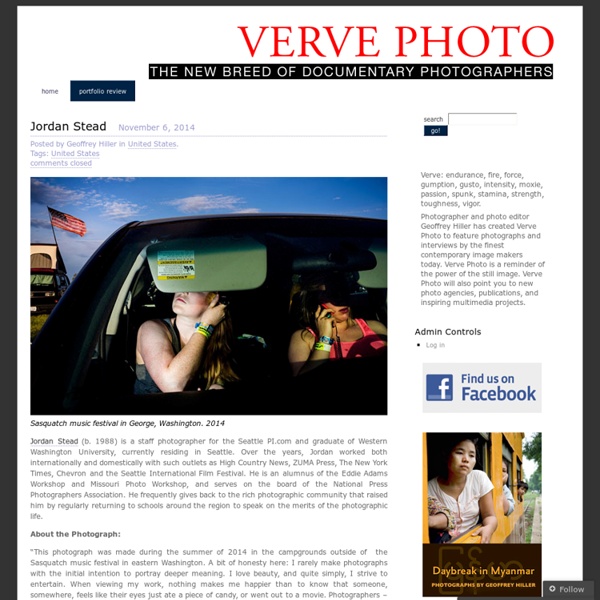 Brennan O`Connor April 24, 2014 Posted by Geoffrey Hiller in Burma, Myanmar. Tags: Burma, Myanmar Karen State, Myanmar 2013 Brennan O`Connor (b. 1970, Canada) has worked for many of Canada’s leading publications before dedicating himself full time to cover self-generated under reported stories in mainstream media. In 2010, he relocated to Asia to follow a long-term project on Burma’s borders and subsequent effects for ethnic populations whose traditional territories’ fall on both sides of the dividing lines.

Documentary Photographers Have Their Say in Words and Pictures A heroin addict is being injected by his friend on a roadside in Pakistan in the early morning. Photo by Yusuke Harada from “Behind the War on Terror” on SocialDocumentary.net. SocialDocumentary.net (SDN) was founded on the belief that documentary photographers can play a valuable role in raising awareness about complex global issues. Often a photographer will spend years on the ground immersed in the culture, geography and politics of a situation. Photography by Gabriela Minks Gabriela Minks is a talented 22 years old semi-professional photographer based in Florianópolis, Brazil. Photo Booth April 16, 2014 Portfolio: Cathedrals of Ice This past February, thanks to an unusually cold winter, the sea caves along the Apostle Islands National Lakeshore, in northern Wisconsin, were accessible by foot for the first time in five years. Visitors were able to walk two miles over the thick ice of Lake Superior to see the ice formations that run up the coastline. Erin Brethauer, a photographer living in North Carolina, visited the sea caves. Click here to view a slide show of her photographs.

Cinemagraph Taking it all in If you can make it here... Meet Me at the Bar How he passed the time There's always time for the paper The Neverending commute 10 most Influential Active Street Photographers Update After quite a few suggestions from you, the StreetHunters.net Readers, we added an extra section at the bottom of the post called “Influential Active Street Photographers recommended by our Readers”. Enjoy! Introduction Mrs. Deane : nothing is too amazing to be true non-digitally manip­u­lated hand print © Yaseen Al-Obeidy The Kuwait Weeks were born out of a con­ver­sa­tion I had with Kuwaiti pho­tog­ra­pher Mohammed Alk­ouh, who is cur­rently hav­ing a solo show at CAP Kuwait, which includes a num­ber of his recent stu­dio por­traits. We talked about his encoun­ters in the tra­di­tional por­trait stu­dios, which gave him the love for the hand-colored image, and how for him those pho­tographs, like real life instances of Oscar Wilde’s pic­tures of Dorian Gray, con­tained the pres­ence and the youth of a fam­ily mem­ber now in advanced age or even deceased. And how the vin­tage image has this mys­te­ri­ous time-warp qual­ity that we can­not shake off or stop being fas­ci­nated by — an addic­tion mer­ci­less tapped into and catered to by sev­eral online plat­forms, numer­ous photo books, col­lec­tions, some gal­leries, eBay sell­ers and auctioneers. Instal­la­tion view with self por­traits of Al-Obeidy over the years © Hes­ter Keijser