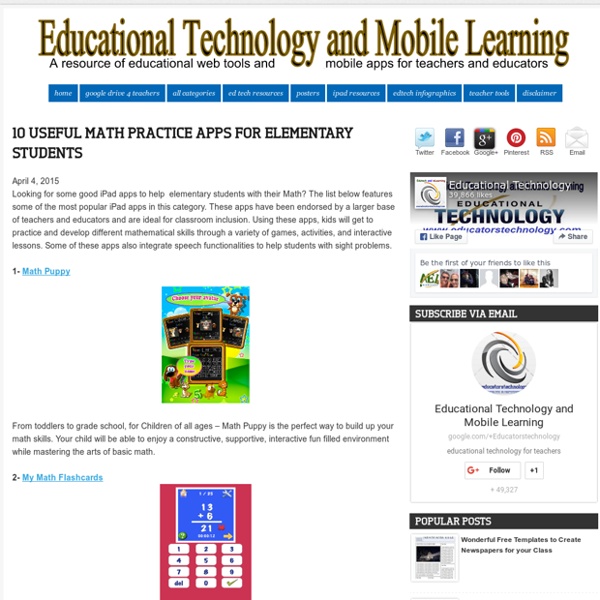 April 4, 2015 Looking for some good iPad apps to help elementary students with their Math? The list below features some of the most popular iPad apps in this category. These apps have been endorsed by a larger base of teachers and educators and are ideal for classroom inclusion. 1- Math Puppy From toddlers to grade school, for Children of all ages – Math Puppy is the perfect way to build up your math skills. 2- My Math Flashcards My Math Flash Card App is for mastering basic elementary math facts. 3- MathBoard MathBoard is a highly configurable math app appropriate for all school aged children. 4- Motion Math Feed your fish and play with numbers! 5- Pizza Fractions In chef's pizzeria your child masters the concept of naming simple fractions using pizza picture examples. 6- Picture Math An incredibly fun and effective way to learn math operations (+, -, ×, ÷). 7- Everyday Mathematics 8- Mathmateer While your rocket is floating weightlessly in space, the real fun begins! 9- Geoboard Related:  Fractions

5 Math Apps for Math Averse Students Math is a core subject and one used in everyday life, especially throughout the K-12 years. Students who enjoy and generally perform well in math classes will have their choice of an amalgam of apps to aid them in both study and enjoyment. There are, however, a fair number of students who simply don’t like to do math at school and who certainly won’t easily be tempted to do extra math at home. Luckily, there are a series of apps available to help math averse students. Some of these are geared towards students who need visual stimulation such as colors, patterns, and graphics to remain engaged in general math concepts. Other students, those who are geared toward auditory stimulation, will be interested only if sound and music come into play. Take a look at these great math apps that will tempt math averse students into learning about important math concepts while having fun and staying engaged. 1. 2. 3. Algebra Touch is a great way for students to refresh their basic algebra skills. 4.

fluency%20documents%20final.pdf Great Android Apps for Helping Students with Math Homework May 21, 2015 While we were curating the 12 Android math apps that were featured in yesterday’s post, we came across some interesting apps that students can use to help them with their math homework. These apps are geared towards enhancing students mathematical skills by providing them with step by step explanations of a variety of math problems. From working on simple calculations to figuring out answers to complex equations, these apps are absolutely a must have. 1- yHomework- Math Solver “yHomework is an easy to use Math solver, just enter your question or equation, and the app will immediately give you the answer together with the full step-by-step solution!” 2- Math Helper “Math Helper Free is the best application on the market, which solves mathematical problems and shows step-by-step solution. 3- PhotoMath “PhotoMath is the world's smartest camera calculator! 4- Mathway 5- AuthoMath Photo Calculator

5 New Math Websites for Teachers May 22, 2015 Today we have curated for you this list featuring some new math websites. These are recommendations we have received in the mail in the last few weeks but we never had time to review them in separate posts. We invite you to check them out and share with us what you think of them. 1- Math is Fun Math Is Fun is a website that offers some great math resources for k-12 students and teachers. 2- Math Playground “Math Playground is a popular learning site filled with math games, logic puzzles, step-by-step instructional videos, math practice, and a variety of problem solving activities. 3- Illuminations Illuminations is a project designed by the National Council of Teachers of Mathematics (NCTM) and supported by the Verizon Foundation. 4- MathCrunch MathCrunch is a fast way to get help with math.”Get instant math help on your phone. 5- Common Core 4 Kids This is one of the oldest math platforms out there.

Using Google Apps in a Math Classroom This week I am hosting some guest bloggers. This is a guest post from Bethany Mager. I have been teaching high school math for 12 years and I currently work to help teachers integrate technology in our 1:1 high school using Google Apps. I often find that math teachers are reluctant to use Google Docs in a math classroom, but Google Apps has completely transformed the way I teach. Collaborative Challenge Problems The best part of using Google in the classroom is having students collaborate with each other on a document. Screenshots I love using online math tools in my classroom, including Desmos and GeoGebra. Images Of course, it’s true all math students must still do most of their work using pencil and paper. Students submitting images through Classroom also makes it really easy to share and discuss their or student work as a class. Forms One of the first things I used when we started using Google Apps was Forms.

Reducing Fractions to Lowest Terms Advertisement. EnchantedLearning.com is a user-supported site. As a bonus, site members have access to a banner-ad-free version of the site, with print-friendly pages.Click here to learn more. (Already a member? Click here.) A fraction is in its simplest form (this is also called being expressed in lowest terms) if the Greatest Common Factor (GCF), also called the Greatest Common Divisor (GCD), of the numerator and denominator is 1. Equivalent Fractions: Equivalent fractions are different fractions that are equal to the same number and can be simplified and written as the same fraction (for example, 3/6 = 2/4 = 1/2 and 3/9 = 2/6 = 1/3). To reduce a fraction to lowest terms (also called its simplest form), divide both the numerator and denominator by the GCD. You can do this because the value of a fraction is not changed if both the numerator and denominator are multiplied or divided by the same number (other than zero). Worksheets and Games to Print:

Math textbooks aren't lining up to Common Core Dive Brief: EdReports.org evaluated 20 K-8 math textbooks and found that 85% (a total of 17) did not align with the Common Core standards. The evaluation was conducted by 46 reviewers, half of which were current teachers, who read each individual text book and then met in groups or via video conference to compare notes and findings. Publishers have pushed back, saying the report is misleading and flawed. For example, Philip Uri Treisman of Agile Mind says he checked to see how long users were logged into the review site and found some spent only 10 minutes on each book. Dive Insight: Texts by Pearson, McGraw-Hill, and Houghton Mifflin Harcourt were among those reviewed, so the controversy stretches all the way to the sector's biggest publishers. The books in the report that did align to the Common Core included all of the books by Eureka Math, and McGraw-Hill's texts for grades 4-5. Recommended Reading EdSurge: Textbooks Fail to Meet Standards, Says EdReports.org

Amazing Mathematical Object Factory AMOF, the Amazing Mathematical Object Factory, shown on the left, produces lists of mathematical objects in response to customer orders. Today you are a customer and you must tell AMOF what you want produced. This factory is totally non-polluting and the objects produced are absolutely free! (There is a vicious rumour however, that the workers are underpaid and overworked.) Click on a icon with an Indigo background, such as , to learn about that object, or on an icon with a Green background, such as to generate the object. , which appears both at the top and at the bottom of all succeeding pages. appears on every page as well; clicking on it will take you back to the SchoolNet home page. Combinatorial objects are everywhere! But what is a combinatorial object? There are many, many types of combinatorial objects and we work with just a few of them in AMOF.

Adding and subtracting fractions Prior knowledge. Identify that the denominator in a fraction tells us how many equal sized parts are in a whole, and the numerator tells us how many of the pieces we are interested in Students can coordinate the numerator and the denominator in a fraction to create and explain meaning for fractions Background Before this activity is commenced, students should have learnt that fractions can be smaller than one, can equal one, and be greater than one, and can relate drawings to numeric fractions. It is also useful if they can convert improper fractions to mixed numbers, though as the students are at stage 5 this is likely to be using additive methods rather than multiplicative ones. Comments on the Exercises Exercise 1 Asks students to solve addition problems with fraction with the support of diagrams. Exercise 2: Parts in a whole Asks students to revisit the idea that n/n = 1 Exercise 3Asks students to solve problems involve addition of fractions with like denominators.