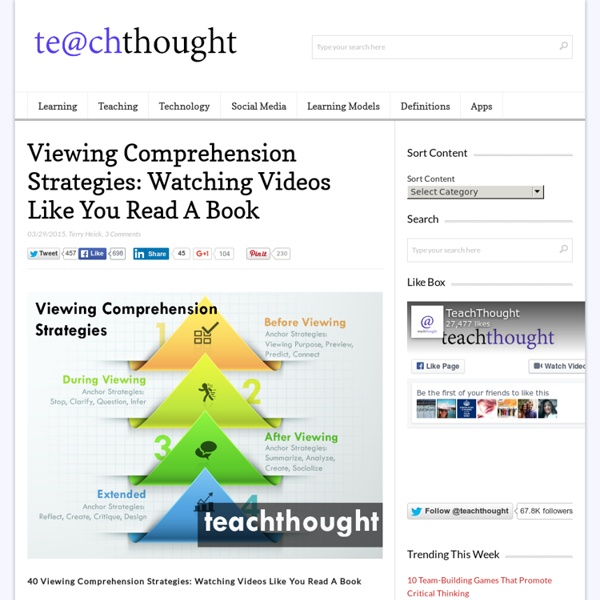 40 Viewing Comprehension Strategies: Watching Videos Like You Read A Book by Terry Heick You can’t watch a video like you read a book; the modalities couldn’t be much more different. On the surface level a video uses light, color, sound, and moving images, with the potential for adding text and shape and color and light filters as overlays to communicate ideas, while the most basic text structures use alphanumeric symbols, paragraph and sentence structure, and an assortment of text features (e.g., white space, headings and subheadings, fonts, etc.) to convey their message. There is much, much more to it than this. Videos are meant to be consumed in short bursts, while literature, for example, is meant to be “sat with.” The Interaction Between Video & Text This suggests that video consumption would more readily transfer to video production, or even video as a means of assessment. Below are a few possibilities, many of which you’ll notice apply to non-digital media as well. Before Viewing 1.

The Second Most Spoken Languages Around the World The most spoken language in any country is often obvious; usually, it’s the official language of the country. However, you can learn a lot about a country by analyzing its second most spoken language. More than 60 million Americans speak a language at home other than English, of the majority of these Americans reported to the U.S. Census Bureau that they spoke English “very well.” Throughout the United States, Spanish is the most common second language; however, in states like Louisiana, Maine, New Hampshire, and Vermont, French is the most commonly spoken second language, a reflection of their individual state histories. To accommodate students who speak a language other than English at home, English as a second language (or ESL) programs have become more prevalent as essential school programs.

Jane's Pick of the Day: 25 places to find instructional videos Recently I have received a number of emails asking about places that offer free instructional videos (on all subjects), so I thought I would put together a posting of the main ones that I know about: 5min Life Videopedia - instructional and how-to videos Academic Earth - Thousands of video lectures from the world's top scholarsblip.tv - next generation TV networkGoogle Video - videos on all topics Graspr - The instructional video network Howcast - How-to videos iCue - A fun, innovative, learning environment built around video from the NBC News ArchivesInstructables - Make, HowTo and DIY iTunes U - Faculty are using iTunes U to distribute digital lessons to their students, e.g Stangord, Trinity College Dublin, etc.

6 Ways Social Media Can Change Your Classroom Remember when schools had policies outlawing cell phones in the classroom? Teachers used to tell students, “Keep it in your locker, in your backpack, in your car, or at home, just don’t bring it in here. Your phone is a distraction.” Randall's Video Snapshots: For ESL/EFL Students The movie clips called Video Snapshots are designed to provide additional learning content related to other listening activities on my site. To learn more about this project, read the Frequently Asked Questions below: Current Videos (Click the picture to watch the video - Click the link below the picture to visit a related listening activity). You can also search by title below:

Numbers: Facts, Figures & Fiction Click on cover for larger image Numbers: Facts, Figures & Fiction by Richard Phillips. Published by Badsey Publications. See sample pages: 24, 82, 103. What Teens are Learning From ‘Serial’ and Other Podcasts It didn’t take long for Michael Godsey, an English teacher at Morro Bay High School in California, to realize that his decision to use a public radio podcast in the classroom was a wise one. It wasn’t any old podcast he was introducing to his classes. It was “Serial,” the murder-mystery phenomenon produced by reporter Sarah Koenig of “This American Life,” which already was transfixing a wide swath of the adult population.

The Best Fun Videos For English Language Learners In 2014 – Part One I use short, funny video clips a lot when I’m teaching ELLs, and you can read in detail about how I use them in The Best Popular Movies/TV Shows For ESL/EFL (& How To Use Them). In short, there are many ways to use them that promote speaking, listening, writing and reading. I’ve posted quite a few of them during the first six months of this year, and I thought it would be useful to readers — and to me — if I brought them together in one post. I’ve also published quite a few during the previous seven years of this blog.

METRO MAP CREATOR If you have the code for a map please paste it into the box below, then click "LOAD"LOAD CODE Alternatively you can chose a sample route.DefaultPoo Land Here is the code for your map. Copy this code to a text file on your computer if you want to carry on with your map at a latter date.