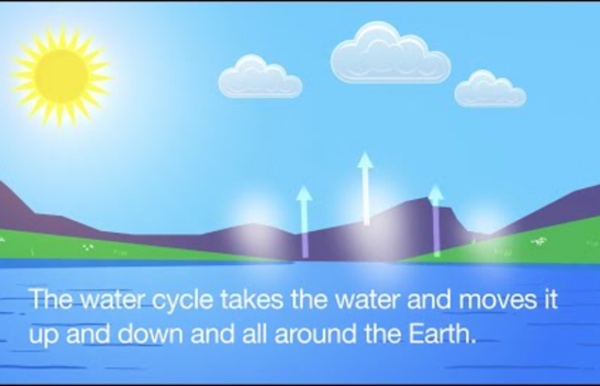 Water cycle Diagram of the Water Cycle As the Earth's surface water evaporates, wind moves water in the air from the sea to the land, increasing the amount of freshwater on land. Water vapor is converted to clouds that bring fresh water to land in the form of rain snow and sleet Precipitation falls on the ground, but what happens to that water depends greatly on the geography of the land at any particular place. The water cycle involves the exchange of energy, which leads to temperature changes. The evaporative phase of the cycle purifies water which then replenishes the land with freshwater. Description Processes Many different processes lead to movements and phase changes in water Condensed water vapor that falls to the Earth's surface. The precipitation that is intercepted by plant foliage eventually evaporates back to the atmosphere rather than falling to the ground. Snowmelt The runoff produced by melting snow. The variety of ways by which water moves across the land. Subsurface flow Evaporation See also

'Cryoegg' to explore under Greenland Ice Sheet Media playback is unsupported on your device UK scientists head to Greenland this week to trial new sensors that can be placed under its 2km-thick ice sheet. The instruments are designed to give researchers unique information on the way glaciers slide towards the ocean. Dubbed "Cryoeggs", the devices will report back on the behaviour of the meltwaters that run beneath the ice. This water acts to lubricate the flow of glaciers, and in a warmer world could increase the volume of ice discharged to the ocean. This would push up global sea levels - potentially by as much as 7m, if all the ice on Greenland were to melt. Scientists want to understand how fast the process could unfold. "Our models have done a fantastic job so far in building a picture of what might happen, but they've essentially been working blind because we have so little data from the bed of the Greenland ice sheet," said Dr Liz Bagshaw from Cardiff University. Image copyright M.Prior-Jones/Cardiff Uni What exactly is a Cryoegg?

theconversation The Indus is one of Asia’s mightiest rivers. From its source in the northwestern foothills of the Himalayas, it flows through the Indian state of Jammu & Kashmir and along the length of Pakistan to the Arabian Sea. The river and its five tributaries together make up the Indus Basin, which spans four countries and supports 215m people. Yet fast-growing populations and increasing demand for hydropower and irrigation in each country means the Indus is coming under intense pressure. India and Pakistan, the two main countries in the basin, divided up rights to the various tributaries under the Indus Water Treaty of 1960 (IWT). For instance, India recently fast-tracked approval for several major dams along the Chenab, a 900km-long tributary of the Indus that was originally allotted to Pakistan under the IWT. Under the IWT, India does indeed have a right to “limited hydropower generation” upstream on the western tributaries allotted to Pakistan, including the Chenab and the Jhelum. The treaty

How much water is there on Earth, from the USGS Water Science School All Earth's water, liquid fresh water, and water in lakes and rivers View full size The Earth is a watery place. But just how much water exists on, in, and above our planet? About 71 percent of the Earth's surface is water-covered, and the oceans hold about 96.5 percent of all Earth's water. Water is never sitting still. All Earth's water in a bubble This drawing shows blue spheres representing relative amounts of Earth's water in comparison to the size of the Earth. The smaller sphere over Kentucky represents Earth's liquid fresh water in groundwater, swamp water, rivers, and lakes. Do you notice the "tiny" bubble over Atlanta, Georgia? Water is on and in the Earth The vast majority of water on the Earth's surface, over 96 percent, is saline water in the oceans. Even though you may only notice water on the Earth's surface, there is much more freshwater stored in the ground than there is in liquid form on the surface. How much water is there on (and in) the Earth? Related topics: