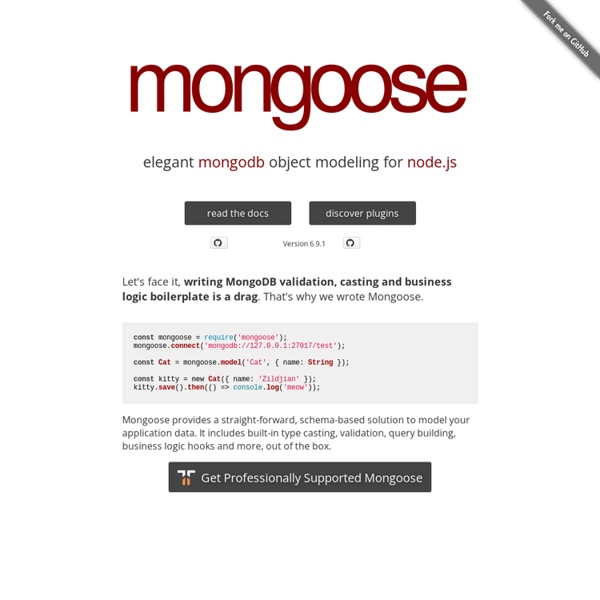 The Node Beginner Book Faye CoffeeScript express - MongoDB schema design for multible auth user accounts Rocking Out With CoffeeScript Even though CoffeeScript is a new language, you'll learn it very quickly. You should, since it's only JavaScript flaunting with some flashy clothes, after all. It reads like Ruby or Python, but compiles down to pure, non-fluffy JavaScript. Today, we're going to take a look at why everyone is talking about CoffeeScript. A Word From the Author With the advent of powerful JavaScript engines, like V8, JavaScript has shed its stigma of a gimped tool for juvenile interactions and morphed into quite a powerhouse. But I've always felt the syntax itself to be a bit kludgy. What is CoffeeScript? CoffeeScript compiles down to raw JS. CoffeeScript is essentially just a syntactic rewrite of JavaScript. Remember that the CoffeeScript compiler outputs clean JavaScript that not only follows best practices and is eminently readable but also passes JSLint. This may seem like an alien concept but under the web development umbrella, we've already seen our fair share of this ideology. Some Quick Code Yays Nays

Connect Connect is a middleware framework for node,shipping with over 18 bundled middleware and a rich selection of3rd-party middleware. var app = connect() .use(connect.logger('dev')) .use(connect.static('public')) .use(function(req, res){ res.end('hello world\n'); }) http.createServer(app).listen(3000); Installation: $ npm install connect Middleware: Links: The Octoverse in 2012 · GitHub Blog emailjs UglifyJS Kue Kue is a feature rich priority job queue for node.js backed by redis. A key feature of Kue is its clean user-interface for viewing and managing queued, active, failed, and completed jobs. At any point in the job's life-time you can view verbose details, including the job's arbitrary data, creation, update, failure, and completion times. Jobs may incrementally update their progress, providing vital feedback for long-running tasks. Job-specific logging allows you to see how your job's are progressing, or any hiccups they may encounter. With the UI's action panel you can filter jobs by type and alter sorting at any time.