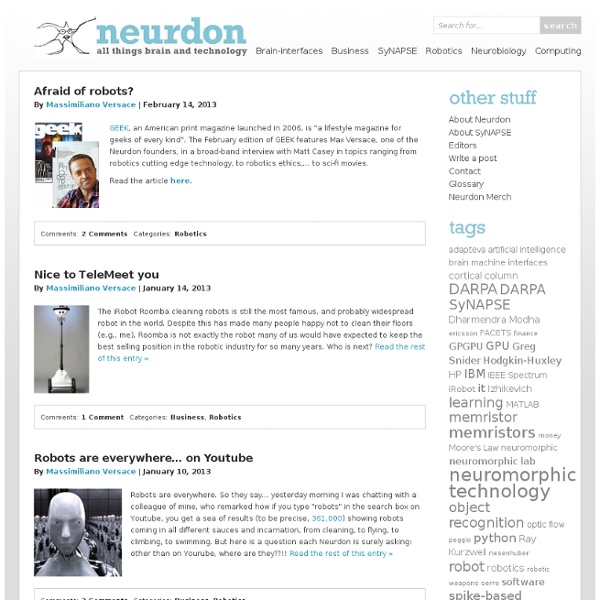 Visualize what your first personal or office service robot will look like. What do you imagine? Depending upon your age, you may think of Rosie Jetson, C-3PO or even Bender. (Greatest TV Robots of All Time.) Your service robot is coming, but it won't look like any of the robots in the image above. Instead, it will probably look like an iPad on a stick or an iPhone in a tiny tractor.

BrainGate neural interface system reaches 1,000-day performance milestone An investigational implanted system being developed to translate brain signals toward control of assistive devices has allowed a woman with paralysis to accurately control a computer cursor at 2.7 years after implantation, providing a key demonstration that neural activity can be read out and converted into action for an unprecedented length of time. PROVIDENCE, R.I. [Brown University] — Demonstrating an important milestone for the longevity and utility of implanted brain-computer interfaces, a woman with tetraplegia using the investigational BrainGate* system continued to control a computer cursor accurately through neural activity alone more than 1,000 days after receiving the BrainGate implant, according to a team of physicians, scientists, and engineers developing and testing the technology at Brown University, the Providence VA Medical Center, and Massachusetts General Hospital (MGH). From fundamental neuroscience to clinical utility Moving forward About the BrainGate collaboration

Artificial Neural Networks/Competitive Learning Competitive Learning[edit] Competitive learning is a rule based on the idea that only one neuron from a given iteration in a given layer will fire at a time. Weights are adjusted such that only one neuron in a layer, for instance the output layer, fires. Perception puzzles, Visual Perception, Optical illusions and Paradoxes This page illustrates that our visual perception cannot always be trusted. The components of an object can distort the perception of the complete object. Our mind is the final arbiter of truth.

The Daily Brain If I offered to sell you a liquid extract made from the velvety coating of deer antlers, claiming that it will catalyze muscle growth, slow aging, improve athletic performance and supercharge your libido – I’d expect you'd be a little skeptical. But what if I added that a huge percentage of professional athletes are using the stuff and paying top dollar, $100 or more an ounce, and swear up and down that just a few mouth sprays a day provides all benefits as advertised? Would you be willing to give it a try? Ever since former Baltimore Ravens star Ray Lewis admitted a few months ago that he used deer antler spray (though subsequently denied it), the market for the stuff has exploded. Some estimates say that close to half of all professional football and baseball players are using it and a hefty percentage of college players as well, to say nothing of the army of weightlifters and bodybuilders that have made the spray a daily part of their routines.

Steven E. Lamberson, Jr. Funwork #3 Page ECE 595C Funwork #3 Steven E. Lamberson, Jr. October 9, 2004 Winner-Take-All Hopfield Neural Network Prismatic How Men's Brains Are Wired Differently Than Women's Men aren't from Mars and women aren't from Venus, but their brains really are wired differently, a new study suggests. The research, which involved imaging the brains of nearly 1,000 adolescents, found that male brains had more connections within hemispheres, whereas female brains were more connected between hemispheres. The results, which apply to the population as a whole and not individuals, suggest that male brains may be optimized for motor skills, and female brains may be optimized for combining analytical and intuitive thinking.

Wearable ‘neurocam’ records scenes when it detects user interest (Credit: Neurowear) Keio University scientists have developed a “neurocam” — a wearable camera system that detects emotions, based on an analysis of the user’s brainwaves. The hardware is a combination of Neurosky’s Mind Wave Mobile and a customized brainwave sensor. Hopfield Neural Network Example Get the entire book! Now that you have been shown some of the basic concepts of neural network we will example an actual Java example of a neural network. The example program for this chapter implements a simple Hopfield neural network that you can used to experiment with Hopfield neural networks. The example given in this chapter implements the entire neural network. More complex neural network examples will often use JOONE. JOONE will be introduced in Chapter 3.

This levitating Bluetooth speaker is the best we've seen When I met with OM Audio in Manhattan to check out what the company was calling the "world's first levitating Bluetooth speaker," I didn't bat an eye. I had never myself seen a levitating speaker before that day, and a thorough internet search turned up nil. As it turns out, a Taiwanese company has been showing off a very similar (albeit nonfunctioning) device for months. ASWY, based in Taipei, is here at IFA in Berlin demoing a production-ready version of its own speaker, which at this stage looks much more polished than the OM Audio prototype I saw last month.

Bayesian FAQ Also, if the evidence and cross validation are strongly in disagreement, I would predict that cross validation would be the better method for predicting generalisation error. However, this is not always the case. If we take Takeuchi and MacKay's interpolation model and increase the number of hyperparameters, the predictive properties do change as the number of hyperparameters increases.

Neocognitron neural network Introduction Artificial neural network architectures such as backpropagation tend to have general applicability. We can use a single network type in many different applications by changing the network’s size, parameters, and training sets. In contrast, the developers of the neocognitron set out to tailor architecture for a specific application: recognition of handwritten characters. Such a system has a great deal of practical application, although, judging from the introductions to some of their papers, Fukushima and his coworkers appear to be more interested in developing a model of the brain .To that end, their design was based on the seminal work performed by Hubel and Weisel elucidating some of the functional architecture of the visual cortex. We could not begin to provide a complete accounting of what is knownabout the anatomy and physiology of the mammalian visual system.