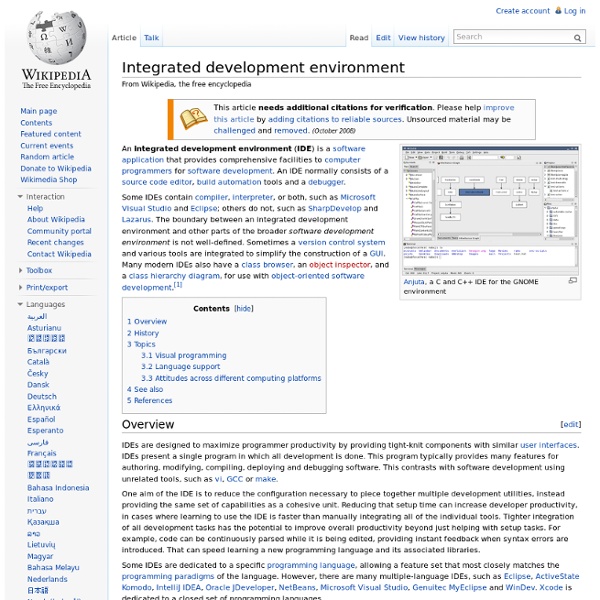 An integrated development environment (IDE) or interactive development environment is a software application that provides comprehensive facilities to computer programmers for software development. An IDE normally consists of a source code editor, build automation tools and a debugger. Most modern IDEs offer Intelligent code completion features. Overview[edit] One aim of the IDE is to reduce the configuration necessary to piece together multiple development utilities, instead providing the same set of capabilities as a cohesive unit. While most modern IDEs are graphical, text-based IDEs such as Turbo Pascal were in popular use before the widespread availability of windowing systems like Microsoft Windows and the X Window System (X11). History[edit] IDEs initially became possible when developing via a console or terminal. Maestro I is a product from Softlab Munich and was the world's first integrated development environment[1] 1975 for software. Topics[edit] Visual programming[edit]

GNU i/ɡnuː/[2][3] is a Unix-like computer operating system developed by the GNU Project. It is composed wholly of free software. It is based on the GNU Hurd kernel and is intended to be a "complete Unix-compatible software system"[1][4][5] GNU is a recursive acronym for "GNU's Not Unix!",[1][6] chosen because GNU's design is Unix-like, but differs from Unix by being free software and containing no Unix code.[7] Development of GNU was initiated by Richard Stallman in 1983[1][8] and was the original focus of the Free Software Foundation (FSF), but no stable release of GNU yet exists as of January 2014[update].[1][9][10][11] However, non-GNU kernels, most famously the Linux kernel, can also be used with GNU software.[12][13][14] Stallman views GNU as a "technical means to a social end. History[edit] The plan for the GNU ("GNU's Not Unix!") The goal was to bring a wholly free software operating system into existence. Components[edit] GNU variants[edit] Copyright, GNU licenses, and stewardship[edit]

Structured Programming Background Since the invention by Von Neumann of the stored program computer, computer scientists have known that a tremendous power of computing equipment was the ability to alter its behavior, depending on the input data. Calculating machines had, for some time, been able to perform fixed arithmetic operations on data, but the potential of machines capable of making decisions opened up many new possibilities. Machines that could make decisions were capable of sorting records, tabulating and summarizing data, searching for information, and many more advanced operations that could not even be imagined at the time. In early programming languages, like Fortran (first invented in 1954) and various low level machine languages, the goto statement allowed the computer to deviate from the sequential execution of the program instructions. However, the increasingly complex code that resulted from goto statements became harder and harder to maintain. 1. Add flour. 2. Example: Washing Dishes 3.

Year 2000 problem The (French) sign reads "3 January 1900" instead of "3 January 2000" The Year 2000 problem (also known as the Y2K problem, the Millennium bug, the Y2K bug, or simply Y2K) was a problem for both digital (computer-related) and non-digital documentation and data storage situations which resulted from the practice of abbreviating a four-digit year to two digits. In 1997, The British Standards Institute (BSI) developed a standard, DISC PD2000-1,[1] which defines "Year 2000 Conformity requirements" as four rules: No valid date will cause any interruption in operations.Calculation of durations between, or the sequence of, pairs of dates will be correct whether any dates are in different centuries.In all interfaces and in all storage, the century must be unambiguous, either specified, or calculable by algorithmYear 2000 must be recognized as a leap year It identifies two problems that may exist in many computer programs. Background[edit] Programming problem[edit] The need for bit conservation[edit]

COBOL COBOL (/ˈkoʊbɒl/, an acronym for common business-oriented language) is a compiled English-like computer programming language designed for business use. It is imperative, procedural and, since 2002, object-oriented. COBOL is primarily used in business, finance, and administrative systems for companies and governments. In 1997, Gartner Group estimated that there were a total of 200 billion lines of COBOL in existence which ran 80% of all business programs.[2] It was designed in 1959 by the Conference on Data Systems Languages (CODASYL) and was largely based on previous programming language design work by Grace Hopper, commonly referred to as "the (grand)mother of COBOL".[3][4][5] It was created as part of a US Department of Defense effort to create a portable programming language for data processing. COBOL has an English-like syntax which was designed to be self-documenting and highly readable. History and specification[edit] Background[edit] COBOL 60[edit] The cover of the COBOL 60 report.

Unity (game engine) Unity is a cross-platform[2] game engine with a built-in IDE developed by Unity Technologies. It is used to develop video games for web plugins, desktop platforms, consoles and mobile devices. It grew from an OS X supported game development tool in 2005 to a multi-platform game engine.[3] Gone Home is a 2013 video game built with the Unity engine The graphics engine uses Direct3D (Windows, Xbox 360), OpenGL (Mac, Windows, Linux), OpenGL ES (Android, iOS), and proprietary APIs (consoles). Unity also includes the Unity Asset Server - a version control solution for the developer's game assets and scripts. Unity supports deployment to multiple platforms. Upcoming platforms include PlayStation 4 and Xbox One. The first version of Unity was launched at Apple’s Worldwide Developers Conference in 2005. Unity 4 was announced on June 18, 2012 and includes several new additions to the technology in the initial Unity 4.0 release. New features include DirectX 11 support and Mecanim animation.

TIL the creator of "The Bachelor" thinks women love the show because they enjoy watching other women suffer rejection : todayilearned Common biases in socionics One of the challenges in creating objective statements about Socionics is that the very nature of the field invites the potential for bias. For a simple demonstration, consider someone trying to ascertain another person’s strong IM elements by asking "What do you think you can do better than everybody else?" The question itself reflects a competitive nature, which may not be equally shared by all people. Categories of potential causes for systemic biases in socionics include those shown in the table of contents below. Type, quadra, or dichotomy-centric biases Work by socionics theorists of a particular type or quadra may be subject to point-of-view biases inherent to their own type or quadra. Alpha-centrism An example of possible Alpha bias is that descriptions of and are often described in what seem to some people to be broader, more encompassing terms than the IM elements of Gamma, being the opposing quadra. bias Similarly, is often described more enigmatically as related to "time." ). .

Brooklyn, New York's Red Hook Criterium By BikeRadar US | Monday, March 26, 2012 7.15pm A group of chase riders string it out in pursuit of leader Dan Chabanov Red Hook Criterium View Thumbnail Gallery With rain threatening, roughly 100 riders took the line for a mass start Red Hook night crit in Brooklyn, NY this past Saturday night, 24 March. The Red Hook Crit used to be a pure alley cat (with racers dodging traffic as well as fellow competitors), however, now in its fifth edition the underground nature of the race has given way to big crowds and a unique draw to racers around the nation. Even still, it retains much of its original charms: riders still compete on brakeless fixed gear bikes; the single race includes men and women riders in the same bunch, and — by any stretch — the course is as challenging as ever, however, just slightly safer, since its now closed to cars. This year, the first few laps were rough-and-tumble with riders fighting hard to establish a lead group.

How to create click-to-call links for mobile browsers Remember: most mobile devices are also phones! So, why not create link-to-call actions? If you’re creating a business guide, or even for your own unique phonebook, most people will prefer to call a person instead of filling in a form on the device. In this article, we analyze the new URI schemes, some meta tags and also how to call Skype or Facetime applications from a website. This content is partially extracted from my book “Programming the Mobile Web”, published by O’Reilly. The tel: scheme The first de facto standard (copied from the Japanese i-Mode standards) is to use the tel: scheme. Today, we can find support for tel: URI-scheme in almost every mobile device, including: Safari on iOS, Android Browser (image above), webOS Browser (image above), Symbian browser, Internet Explorer, Opera Mini and low-end devices browsers. The very basic and simple syntax is: <a href="tel:+1800229933">Call us free! What happens when the user clicks Sending DMTF Tones Autodetecting phone numbers For Safari