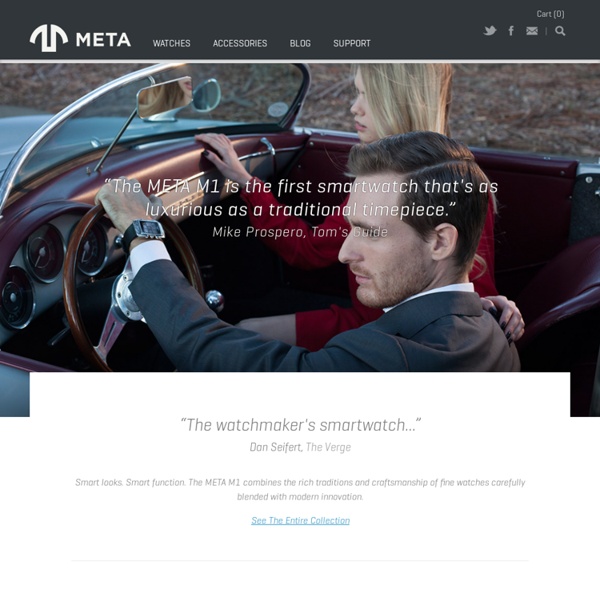 Wockets: Open Source Accelerometers for Phones Sensors and Software for Real-Time Activity Recognition on Mobile Phones The goal of this open source project is to create software and hardware that permits automatic, 24/7 physical activity and context detection on common mobile phones. We are doing this by iteratively designing and testing Wockets -- miniature, low-cost hardware devices that will measure human motion using accelerometers. Wockets will send data to mobile phones that are processed by software running on the phone to automatically detect type, duration and intensity of physical activity. The software that uses Wockets will be free and open source. This project is a collaboration between the Northeastern University Personal Health Informatics program, MIT House_n, and the Stanford Prevention Research Center. To receive occasional updates on the project, please join the project mailing list.

First Look: Motorola ACTV [VIDEO] The Motorola ACTV is not a new concept. We have seen the smartwatch for fitness tackled several times to varying levels of success (mostly no success at all). The most memorable attempt is Sony Ericsson’s LiveView, a similarly sized device based on Android and ready to sync up to the nearest Google smartphone. Sure, it does pair up with your Android phone and allow you to quickly view messages and answer calls (and it does pair with any Android phone, not just Motorola devices). The device itself is made well, works as advertised, and also plays host to a myriad of already available accessories based on the ANT+ protocol, from hear rate monitors to cycling computers, providing extremely accurate workout tracking based on more than GPS and accelerometer feedback. Die-hard fitness buffs might get behind the ACTV, and Moto is pushing it to the right people.

Wireless Products » SureCross » Banner Engineering Corp. Contact a Banner EngineerAbout Your Application All Gateway devices are capable of running a Site Survey on the wireless sensor network. Site Surveys are conducted between the Gateway and each Node to analyze the radio signal strength and data transfer reliability between the two devices. DX70 devices report Site Survey results using the LEDs, with the flash rate indicating the radio signal strength. DX80 and DX9x Gateways report Site Survey results using the alphanumeric LCD display. Site Survey results are listed as a percentage of data packets received and indicate the signal strength of the received signal. Judging if the reliability of a network’s signal meets the needs of the application is not simply a matter of green, yellow, and red packets received. A good guideline is to keep the missed packets average to less than 40%. Mounting the network’s antennas higher, Using higher gain antennas, or Adding data radios to the network.

WIMM Wearable Platform hands-on [Video] Wearable sub-displays keep coming around, and WIMM Labs is the latest company to try its hand at the segment. Its WIMM Wearable Platform - a 1.4-inch color touchscreen, scaled to be wearable on your wrist, and paired with WiFi, Bluetooth, various sensors and running Android-based "Micro Apps" - obviously stood out of the crowd, having caught the attention of Foxconn and two rounds of financing from the huge manufacturing/ODM company. We caught up with the WIMM Labs team to check out the Wearable Platform and find out if it stood more chance of success than, say, Sony Ericsson's LiveView. The basic premise of the Wearable Platform isn't new. People carry their phones and tablets in pockets and bags, not in their hand, and so when nuggets of information, alerts and updates come in, they need to be taken out in order to check them. WIMM's One developer kit hardware is a step ahead of some systems we've already seen.