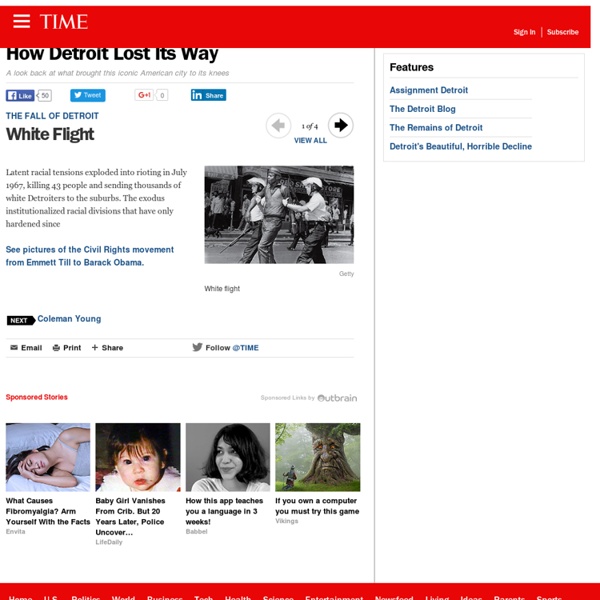 Marilyn Salenger: ‘White flight’ and Detroit’s decline - The Washington Post By Marilyn Salenger By Marilyn Salenger July 21, 2013 Marilyn Salenger is president of Strategic Communications Services and a former correspondent and news anchor for several CBS stations. An almost palpable sadness has swept across the country at the news that the city of Detroit has filed for bankruptcy. While the possibility of this had been discussed, the reality of what was once the fourth-largest city in the United States sinking to such depths is disheartening, a moment people will remember for years to come. To understand that the decline and bankruptcy represent so much more than dollars and cents requires a step back to a time that many would prefer to forget but remains unforgettable.

A School District in Crisis: LOVELAND Comparing Detroit’s School Closings to Chicago Detroit is not the only major city school district facing closures and consolidations: Pittsburgh closed 22 schools in 2006; Washington DC closed 23 schools in 2008.118 Like the City of Detroit, Chicago, IL has struggled with large-scale school closures. Between 2001 and 2012, Chicago Public Schools closed 90 of its 601 schools119 120 as the population of the city declined and enrollment fell.121 Another 49 schools closed at the end of the 2012-13 school year, the single largest number of school closings in the United States, eclipsing Detroit’s 31 school closures the same year.122 CPS has faced many of the same challenges as Detroit: the introduction of charter schools has drawn students away from the public school system, while its lowest-performing schools have been transferred into a privately-run entity.

Anatomy of Detroit’s Decline - Interactive Feature Mayor Coleman A. Young of Detroit at an event in 1980. Richard Sheinwald/Associated Press The financial crisis facing Detroit was decades in the making, caused in part by a trail of missteps, suspected corruption and inaction. Here is a sampling of some city leaders who trimmed too little, too late and, rather than tackling problems head on, hoped that deep-rooted structural problems would turn out to be cyclical downturns. Charles E. Stuff Black People Don't Like - SBPDL: How Did it Come to This? WaPo Sheds Tears Over the Inevitable Collapse of Detroit It is the opinion of SBPDL that the coming collapse of Detroit represents a watershed moment in American history. A mere 100 years ago, Detroit was nearly 100 percent white. Beyond the horizon, these white citizens envisioned a magnificent city, with opulent buildings, grand theaters for entertainment and a thriving economy that would be the envy of the world. If you build it, they will come.

Detroit population rank is lowest since 1850 For the first time since before the Civil War, Detroit is not among the nation’s 20 most populous cities. Detroit’s population was 677,116 as of last summer, a loss of 3,107 residents from the previous year, according to estimates released Thursday by the U.S. Census Bureau. That’s the smallest decline in decades, but it was enough to drop the city to 21st in the nation, surpassed by Seattle, Denver and El Paso, Texas.

The New* Detroit: How gentrification has changed Detroit's economic landscape When Shelby Oberstaedt was a kid, her suburban family was hesitant to travel downtown to attend Detroit Tigers games, fearing a reputation that painted the city as crime-ridden. And while living downtown as her now-husband played football at Wayne State University, she said, those same feelings of insecurity remained. “Living here was a bit scary,” she recalled. “Fifteen years ago I don’t even think my family would’ve come down here.” However, Oberstaedt has chosen to stick around in Detroit, as a general manager for the Jolly Pumpkin Pizzeria and Brewery — one of many individuals part of the rapid process of gentrification Detroit has undergone over the last two decades. Gentrification, a term popularized in the ‘70s, describes the process by which low-income communities are renovated and rebuilt, attracting young professionals but also usually driving up real estate prices and relocating pre-existing residents and businesses.

Detroit Schools: Inside an Experiment to Save the District When Detroit students return to school on Sept. 6, the rodents and mold found in classrooms last year will be all but gone. Cracked windows will be repaired. Collapsed ceilings patched up. Chipped paint removed. Last year, not a single Detroit public school complied with the city's public health and safety codes, one reason teachers protested with widespread sick-outs that temporarily crippled the system. This year, 92% of schools are in full compliance.

Detroit's Staggering Murder And Violent Crime Rate Are 'A Public Health Issue' Following news that Detroit was exiting bankruptcy and officials talking with optimism about the road ahead, grim new statistics drive home how much there is to do before the city’s future truly appears bright. Detroit has the highest murder and violent crime rate of any major city in the country, according to the FBI. FBI Uniform Crime Reporting statistics released Monday show that Detroit logged 316 murders and non-negligent manslaughters last year, with a rate of 45 per 100,000 people. Detroit is a shocking example of "white flight." CofCC.org News Team “We moved away because of the crime.” “We moved away because of the noise.” “We moved because our kids got attacked at the schools.” These are some of the excuses you hear from millions of middle class white people who have moved, sometimes multiple times, to get away from black neighbors. They are terrified to simply say that they fled the neighborhood to get away from black people.

Volume of abandoned homes 'absolutely terrifying' Detroit — Detroit has had more homes foreclosed in the past 10 years than the total number of houses in several suburbs — or all of Buffalo, New York. Since 2005, more than 1-in-3 Detroit properties — 139,699 of 384,672 — have been foreclosed because of mortgage defaults or unpaid taxes, property records show. The vast majority are houses, and the tally is so huge it shocked even those who spent years working on foreclosure in Detroit. "When you see it on a map, it's absolutely terrifying," said Chris Uhl, a vice president of the Skillman Foundation that is working to prevent foreclosures.

Downtown Detroit sales prices rise to 'insane' levels Prices rising for downtown Detroit living John Gallagher Detroit Free Press Greater downtown Detroit residential real estate — a near-dead market only a few years ago — is now soaring with a few property owners even listing their downtown and Midtown properties for fantasy prices running into the millions of dollars. But beneath some of the ridiculous pricing, greater downtown is offering a steady stream of residential openings as prices surge amid downtown's continued revival. The rise and fall of Detroit: A timeline Sign Up for Our free email newsletters On Thursday, Detroit made history — and not in a good way. The heart of the U.S. auto industry and home to the Detroit Tigers, Eminem and the White Stripes, Motown, and (maybe) Jimmy Hoffa's body became the largest city ever to file for bankruptcy. In many ways, this financial crisis is 60 years in the making. As the Motor City faces an uncertain future, here's a look back at some key dates in the long, storied past of one of America's great cities:

Why Is Detroit the Most Dangerous City in US? - General Motors (NYSE:GM) The crime rate in Detroit, a city that has lost half its population since 1960, outdistances that of any other large city in the United States. Statistics show why the figures are so high. 24/7 Wall St. looked at violent crime rates among the nation’s cities with populations of 100,000 or more from the FBI’s 2014 Uniform Crime Report.