When the Computer Takes Over for the Teacher 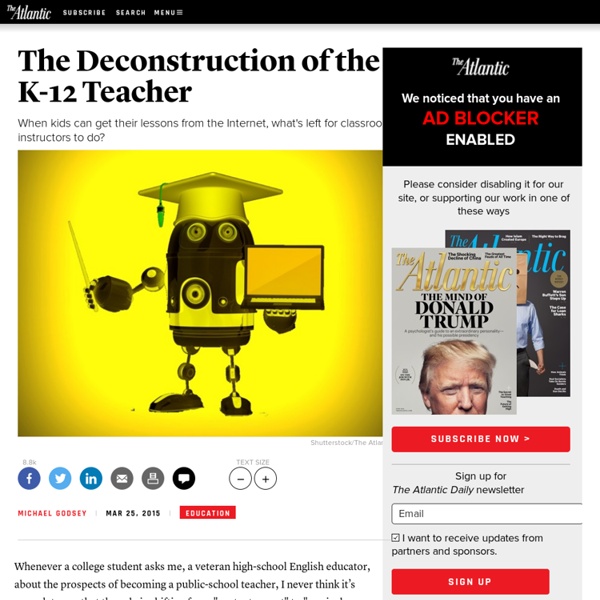 Whenever a college student asks me, a veteran high-school English educator, about the prospects of becoming a public-school teacher, I never think it’s enough to say that the role is shifting from "content expert" to "curriculum facilitator." Instead, I describe what I think the public-school classroom will look like in 20 years, with a large, fantastic computer screen at the front, streaming one of the nation’s most engaging, informative lessons available on a particular topic. The "virtual class" will be introduced, guided, and curated by one of the country’s best teachers (a.k.a. a "super-teacher"), and it will include professionally produced footage of current events, relevant excerpts from powerful TedTalks, interactive games students can play against other students nationwide, and a formal assessment that the computer will immediately score and record. "So if you want to be a teacher," I tell the college student, "you better be a super-teacher." I started reflecting. Well then.

How do Unschoolers Turn Out? Peter Gray has studied how learning happens without any academic requirements at a democratic school. The Boston College research professor also wrote about the long history and benefits of age-mixed, self-directed education in his book Free to Learn. Over the years, as he encountered more and more families who had adopted this approach at home (these so-called “unschoolers” are estimated to represent about 10 percent of the more than two million homeschooled children), he began to wonder about its outcomes in that setting. Finding no academic studies that adequately answered his question, he decided to conduct his own. In 2011, he and colleague Gina Riley surveyed 232 parents who unschool their children, which they defined as not following any curriculum, instead letting the children take charge of their own education. The Pros and Cons of Unschooling

Blended Learning: 3 Stories of Success Many educators and school leaders are ready to move from the “why” do blended learning to the “how” to do blended learning. While our blended learning implementation guide provides step by step directions to start implementing a blended program, it’s often helpful to see real-life examples of schools who exemplify and understand the importance of implementation with fidelity. Schools can purchase and have the best blended technology and devices on the market, but without effective implementation, and a strategy for sustainability and data usage the impact on student learning may be compromised. Join me on a field trip to three schools currently using i-Ready, adaptive learning software created by Getting Smart Advocacy Partner, Curriculum Associates.

3 things great teachers do with technology 3 things great teachers do with technology By Tom Daccord January 26th, 2015 3 inspiring examples of how teachers turn technology into relevance and make learning count How Does the Brain Learn Best? Smart Studying Strategies In his new book, “How We Learn: The Surprising Truth about When, Where, and Why It Happens,” author Benedict Carey informs us that “most of our instincts about learning are misplaced, incomplete, or flat wrong” and “rooted more in superstition than in science.” That’s a disconcerting message, and hard to believe at first. But it’s also unexpectedly liberating, because Carey further explains that many things we think of as detractors from learning — like forgetting, distractions, interruptions or sleeping rather than hitting the books — aren’t necessarily bad after all. They can actually work in your favor, according to a body of research that offers surprising insights and simple, doable strategies for learning more effectively.

Tomorrow's Learning Today: 7 Shifts To Create A Classroom Of The Future Tomorrow’s Learning Today: 7 Shifts To Create A Classroom Of The Future by Terry Heick For professional development around this idea or others you read about on TeachThought, contact us. Let’s take a look at the nebulous idea of the “classroom of the future.” This is all subjective, but it’s worth talking about. Caltech scientists unlock secrets of graphene, a revolutionary wonder material PASADENA >> Caltech scientists solved an enigma, which intrigued scientists for over a decade when they recently discovered a method to mass produce a wonder material as revolutionary as carbon fiber. Graphene, at one-atom thickness, is the thinnest compound known to man. Yet it is 200 times stronger than steel and can move electrons across its surface up to three orders of magnitude better than silicon. Scientists and industry experts want to exploit graphene to produce things such as bendable computer screens, desalinated water, more efficient solar panels and lightning fast microcomputers. Really, the possibilities have yet to be discovered.

edsurge At Cristo Rey San Jose Jesuit High School in San Jose, CA, students are experiencing a new style of learning. Blended learning has provided students with the chance to learn and accumulate information at their own pace. These students are using various websites, such as ALEKS, Duolingo, Memrise, Achieve3000, Curriculet, Teachtci and CK-12.