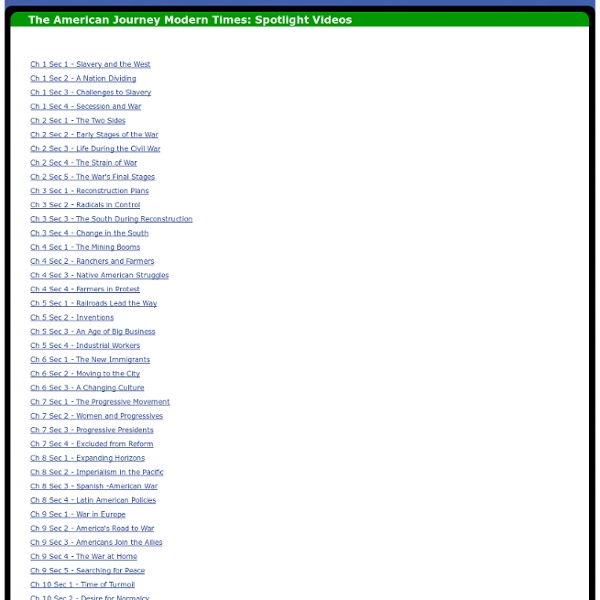 American frontier The American frontier comprises the geography, history, folklore, and cultural expression of life in the forward wave of American westward expansion that began with English colonial settlements in the early 17th century and ended with the admission of the last mainland territories as states in the early 20th century. Enormous popular attention in the media focuses on the Western United States in the second half of the nineteenth century, a period sometimes called the Old West, or the Wild West. As defined by Hine and Faragher, "frontier history tells the story of the creation and defense of communities, the use of the land, the development of markets, and the formation of states."

All Films . American Experience . WGBH Browse the entire American Experience series featuring over 250 films. Watch full films online, download teacher’s guides, go behind the scenes, and learn more about your favorite films. Dinosaur Wars : 1 hr The epic battle waged over dinosaur fossils by rival paleontologists in the American West. Stonewall Uprising : 90 mins In 1969, homosexuality was illegal in almost every state... but that was about to change.

Manifest destiny In the 19th century, Manifest Destiny was the widely held belief in the United States that American settlers were destined to expand throughout the continent. Historians have for the most part agreed that there are three basic themes to Manifest Destiny: The special virtues of the American people and their institutions;America's mission to redeem and remake the west in the image of agrarian America;An irresistible destiny to accomplish this essential duty.[1] Historian Frederick Merk says this concept was born out of "A sense of mission to redeem the Old World by high example [...] generated by the potentialities of a new earth for building a new heaven".[2] AP* United States History - Key Terms, Outlines, Sample Tests Are you tired of using the same old textbook, but your school budget makes it impossible to even consider a new book adoption? Are you looking to productively take advantage of the myriad of online resources? For less than the cost of one classroom textbook, you can purchase for ALL OF YOUR STUDENTS the most up to date world history book on the market. Our World's Story shares not only the most critical tales, turning points and traditions of world history, but also includes the major issues facing the world in 2013. Taken with this comprehensive collection of PowerPoints, documentaries, lesson plans and sample video lectures, Our World's Story is a truly transformative way of bringing history to your classroom..

"A society of patriotic ladies." Cheap prints depicting current events were in great demand in both England and the colonies. This 1775 British print presented a scene in Edenton, North Carolina. Fifty-one women signed a declaration in support of nonimportation, swearing not to drink tea or purchase other British imports. Boycotts of British goods became a widespread form of protest to the Townshend Duties, enacted in 1767 to tax goods such as paint, paper, lead, glass, and tea when they arrived in America. Abstaining from European products and fashions became a mark of patriotism, and merchants who violated nonimportation were subjected to public ridicule.

California Gold Rush Coordinates: The California Gold Rush (1848–1855) began on January 24, 1848, when gold was found by James W. Marshall at Sutter's Mill in Coloma, California.[1] The first to hear confirmed information of the Gold Rush were the people in Oregon, the Sandwich Islands (Hawaii), and Latin America, who were the first to start flocking to the state in late 1848. Political Cartoons Illustrating Progressivism and the Election of 1912 Background The Progressive Era, as the period in history at the turn of the 20th century has come to be known, was a time of tremendous social, economic, and political changes, and the presidential election of 1912 typified the reform spirit of the period. Beginning in the late 1800s with the challenge to the "spoils system" of machine politics, progressivism gathered momentum between 1900 and 1916, as the desire for reform permeated the minds of the American people. Reformers themselves were a diverse group, frequently with different views, but always the same general purpose-- to reform America. Among them were politicians, labor leaders, religious leaders, and teachers, men and women who believed the federal government needed to address the ills of a modern industrialized society.

The American Revolution - Homepage This feature tells the story of the American Revolution and the loss of Britain's North American colonies during the eighteenth century. Few events possess as much historical significance as the rebellion of thirteen British colonies in North America. By successfully defying George III and the British Parliament and winning, with French aid, the War of Independence, the colonies created the United States of America. As a republic in an age of monarchies the new nation challenged the old order. Copyright © The British Library Board