Who's to blame for Detroit's collapse? - latimes 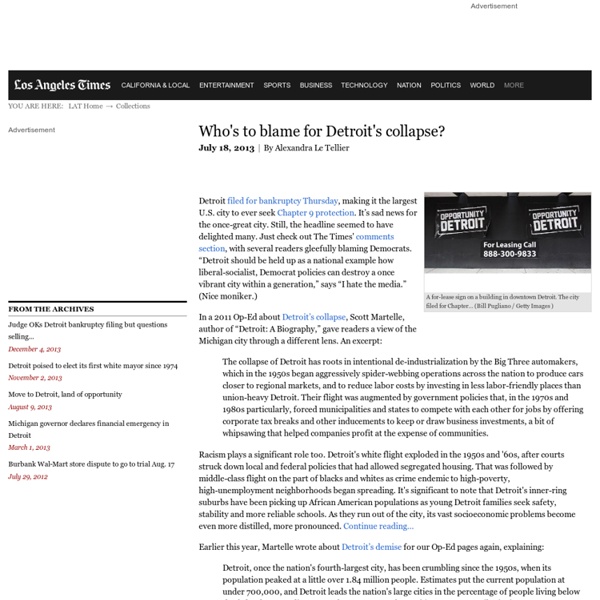 A for-lease sign on a building in downtown Detroit. The city filed for Chapter… (Bill Pugliano / Getty Images ) Detroit filed for bankruptcy Thursday, making it the largest U.S. city to ever seek Chapter 9 protection. It’s sad news for the once-great city. Still, the headline seemed to have delighted many. Just check out The Times' comments section, with several readers gleefully blaming Democrats. In a 2011 Op-Ed about Detroit’s collapse, Scott Martelle, author of “Detroit: A Biography,” gave readers a view of the Michigan city through a different lens. The collapse of Detroit has roots in intentional de-industrialization by the Big Three automakers, which in the 1950s began aggressively spider-webbing operations across the nation to produce cars closer to regional markets, and to reduce labor costs by investing in less labor-friendly places than union-heavy Detroit. Racism plays a significant role too. So, what’s next for Detroit? No federal bailout, period.

Nine Reasons Why Detroit Failed My hometown of Detroit has been studied obsessively for years by writers and researchers of all types to gain insight into the Motor City’s decline. Indeed, it seems to have become a favorite pastime for urbanists of all stripes. How could such an economic powerhouse, a uniquely American city, so utterly collapse? Most analysis tends to focus on the economic, social and political reasons for the downfall. One of my favorite treatises on Detroit is The Origins of the Urban Crisis by Thomas Sugrue, who argues that housing and racial discrimination practices put in place after World War II played a primary role in the decline of Motown. Everyone seems to know the shorthand narrative for Detroit’s fall. But here’s the thing. So why has Detroit suffered unlike any other major city? Detroit’s decline has been going on far longer than most people realize, because of the city’s lack of attention to creating a pleasant built environment. Emphasis added. 1. 2. 3. 4. 5. 6. 7. 8. 9.

Detroit's first post-bankruptcy budget: 'Balanced and modest' spending Detroit’s first budget under bankruptcy has the city spending less than $1 billion from its general fund in each of the next three years, according to the spending plan released Friday by emergency manager Kevyn Orr’s office. The budget is consistent with a restructuring blueprint the city filed in U.S. Bankruptcy Court, a spokesman for Orr said. So the city’s spending plan — typically worked out between the mayor and the City Council — will be subject to the outcome of the city’s bankruptcy case. ■ Full coverage:Detroit’s financial crisis “The budget presented is balanced and modest,” Orr spokesman Bill Nowling said. Many city departments will face moderate to slight budget cuts under Orr’s plan. But the mayor’s office would be getting a bump. Mayor Mike Duggan will not have to approve Orr’s budget, Duggan’s spokesman said. ■ Related:Detroit bankruptcy legislation calls for 20 years of oversight ■ Related: Detroit bankruptcy costs hit $36M in 2013, expected to soar in 2014

Rush Limbaugh: Detroit Went Bankrupt Because Blacks Drove Out Whites By Alan Pyke and Igor Volsky Economists are attributing Detroit’s recent bankruptcy filing to problems facing the entire Rust Belt region: a shrinking tax base, high health and pension costs, sprawl, and general dysfunction. But on Tuesday, Rush Limbaugh added another cause to the long list of factors that have contributed to the city’s downfall: black people. During an appearance on Fox News’ On The Record with Greta Van Susteren on Tuesday, Limbaugh claimed that “unchecked” Democratic rule “since the last Republican mayor [in] 1957” created a lazy and bloated culture of out-of-control spending and corruption. LIMBAUGH: You have massive welfare states where citizens are given things left and right in order to buy their votes. And in the case of the — you throw race into the mix and you bring on Mayor Coleman Young who causes riots in 1967 in Detroit and Mayor Young caused a white flight to suburbia, and Detroit is left with nothing but liberal Democrats running it.

Detroit Police Department To Close Offices After 4 P.M., Offer 'Virtual Precincts' A budget shakeup is forcing some drastic changes in the Detroit Police Department. Effective Monday, the city’s police precincts will no longer remain open around the clock. According to a document obtained by the Detroit Free Press, the department plans to eliminate numerous desk jobs and transfer police working in office positions to street patrols during night-time hours. Between 4 p.m and 8 a.m., the public must make reports through a call center, under a new system of “virtual police precincts,” the Detroit News reports. “I think it’s going to work,” Detroit Police Commander Steve Dolunt told the Free Press. A supervisor and another staff member will be present at physical precincts to handle basic functions, as will officers who deal with prisoners, the Free Press reports. The department will make a formal announcement about the policy changes Thursday.

See the maps from the 1930s that explain racial segregation in Michigan today | state of opportunity We know racial segregation exists in our communities. We know this segregation is rooted in history. And yet, sometimes we allow ourselves to believe that segregation is somehow a natural thing, that it happened all on its own. But segregation in the United States did not happen happen that way. The racial divisions we see in our neighborhoods today are the result of deliberate actions taken in the past. Those actions, rooted in racism, were carried out by both individuals and institutions. One of the clearest visual representations of how racist policies shaped our neighborhoods comes from a mapping project launched in the 1930s by the federal Home Owners' Loan Corporation. The HOLC maps also give us the origin of the term "redlining." Redlining is the practice of denying or limiting financial services to certain neighborhoods based on racial or ethnic composition without regard to the residents' qualifications or credit worthiness. Detroit Grand Rapids Flint Kalamazoo

Ann Arbor officials to discuss police and fire department budgets Monday night Ann Arbor officials have turned their attention to the city's budget for fiscal year 2015-16, which starts July 1, and among the first items they'll be discussing in detail is public safety. The Ann Arbor City Council will meet at 7 p.m. Monday for a special budget work session on the second floor of city hall, 301 E. Huron St. The meeting is open to the public. Topics of discussion include the budgets for the city's police and fire departments, courts, administrator's office, and finance and administrative services. Tom Crawford, the city's chief financial officer, is expected to give an overview of the city's general fund budget forecasts for both fiscal years 2015-16 and 2016-17. No council action is taken at work sessions. "What council will be hearing are some identified maintenance needs, some smaller capital needs, some items that have been deferred over the years," City Administrator Steve Powers said of what to expect Monday night.

Escape From Detroit: The Collapse of America’s Black Metropolis, by Paul Kersey - American Renaissance Escape From Detroit: The Collapse of America’s Black Metropolis by Paul Kersey 374 pages, SBPDL Books, $12 We last checked in with Paul Kersey with his earlier book Hollywood in Blackface, an exploration of the radically different realities of race in movies, and in the physical world. For his next venture, he has launched an exhaustively-researched inspection of the inward collapse of Detroit, MI. Whether Kersey is right or not distills to a question of root causes. Many of us would argue that the cause of Detroit’s decline was abandonment by the middle class, which is inevitable once a mania for democratic equality becomes the norm, because democratic states focus on their poorest and least productive at the expense of the most productive in order to prove efforts are being made to enforce equality. A symptom of this, however, is a tendency to focus on ethnic minorities and civil rights at the expense of all other topics. Young was quoted as telling Rose in Detroit’s Agony:

Marilyn Salenger: ‘White flight’ and Detroit’s decline By Marilyn Salenger By Marilyn Salenger July 21, 2013 Marilyn Salenger is president of Strategic Communications Services and a former correspondent and news anchor for several CBS stations. An almost palpable sadness has swept across the country at the news that the city of Detroit has filed for bankruptcy. While the possibility of this had been discussed, the reality of what was once the fourth-largest city in the United States sinking to such depths is disheartening, a moment people will remember for years to come. To understand that the decline and bankruptcy represent so much more than dollars and cents requires a step back to a time that many would prefer to forget but remains unforgettable. In the late 1960s,racial tensions engulfed parts of our country, at the cost of lost lives and abject destruction. It was the beginning of the ending we are now seeing for a city that once stood tall with head held high. opinions Orlando Shooting Updates post_newsletter348 follow-orlando true after3th