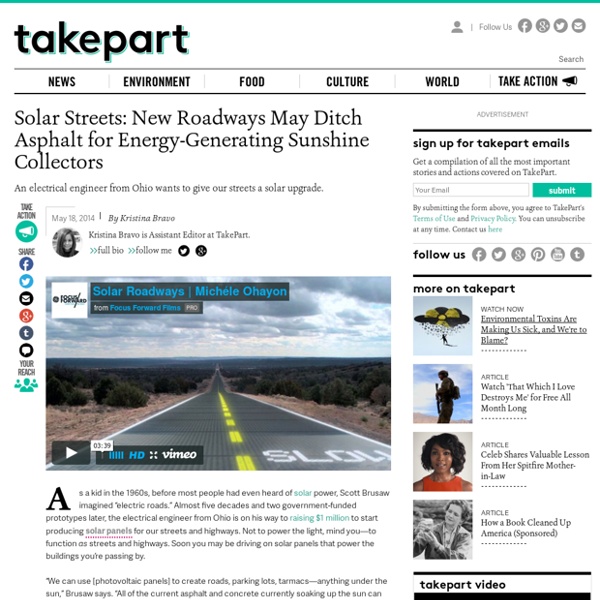 As a kid in the 1960s, before most people had even heard of solar power, Scott Brusaw imagined “electric roads.” Almost five decades and two government-funded prototypes later, the electrical engineer from Ohio is on his way to raising $1 million to start producing solar panels for our streets and highways. Not to power the light, mind you—to function as streets and highways. Soon you may be driving on solar panels that power the buildings you’re passing by. “We can use [photovoltaic panels] to create roads, parking lots, tarmacs—anything under the sun,” Brusaw says. “All of the current asphalt and concrete currently soaking up the sun can be covered with our technology to turn that sunlight into clean, renewable electricity.” The biggest challenge Brusaw faced was engineering a case to protect the fragile solar cells. It may take some time to see them on highways, though. Electric safety concerns would also need to be addressed, he says, considering that the road is not controlled.

Vulcan Real Estate Makes News by Going Salmon Safe Tuesday, 07 July, 2015 13:31Last Updated on Tuesday, 07 July, 2015 13:32Written by Stewardship Partners On June 8th, 2015, Vulcan Inc. announced its Commitment to Action with the Clinton Foundation’s Clinton Global Initiative (CGI) for urban watershed protection and restoration through sustainable development practices that align with Salmon-Safe environmental certification. The public announcement occurred in early June at the CGI America 2015 conference in Denver, Colo., which brings together various leaders from across industries for a think-tank style multi-day engagement focused on developing solutions for economic growth. At CGI America, Ada M. Healey, vice president of real estate for Vulcan Inc., had the opportunity to speak with global leaders about Vulcan’s commitment to serve as pilot developer for Salmon-Safe’s new developer accreditation initiative. Vulcan has been working with the Salmon-Safe Urban program for two years.

Volkswagen's appalling clean diesel scandal, explained It sounds like the sinister plot of some straight-to-DVD movie. Since 2009, Volkswagen had been installing elaborate software in 482,000 "clean diesel" vehicles sold in the US, so that the cars' pollution controls only worked when being tested for emissions. The rest of the time, the vehicles could freely spew hazardous, smog-forming compounds. Suffice to say, regulators were livid once they caught on.

Google's making it easy for you to get solar panels onto your roof Adding solar panels to your roof can be frustrating, since it's often difficult to know if your home receives enough light to justify the investment. Google Maps, however, has satellite, navigation and sunlight data for every property in the world, so it's ideally placed to tell you how many rays hit your crib on a daily basis. That's why the firm is launching Sunroof, a database of how much solar energy hits each building in a city, helping people work out if it's worth the effort. Sunroof is intended as a "treasure map" for future green energy projects, telling you how much of a saving you'd make and how long it'd take to make back your initial outlay.

New Fund Will Help More Seattle Residents Build Rain Gardens RainWise garden Image by Lisa Stiffler Seattle’s RainWise rain garden program is spreading green stormwater solutions across the city, but the rebate program has been out of reach for some homeowners with more modest incomes. While RainWise offers generous reimbursements—$4,600 on average for the installation of rain gardens and cisterns—the homeowner has to pay for the work upfront, then wait up to two months for the program to pay them back. Seattle 2030 District Releases New Strategic Plan High Performance Building Districts At our Summer Reception, the Seattle 2030 District unveiled a new Strategic Plan to make substantial progress toward achieving our ambitious energy efficiency, water and commuting goals for existing and new buildings. The Board has adopted two strategic priority areas – transforming our buildings and transforming our market. In the built environment, priorities focus on facilitating innovative, pragmatic and economically viable measures that reduce environmental impacts, increase resilience, lower operating costs, and improve property values. These measures expand upon existing efforts such as the Smart Building Initiative and Electrify Seattle as well as introduce new projects such as the Green Stormwater Initiative.

The EPA's big crackdown on smog, explained The lobbying battle over smog has been one of the most bitter environmental fights of the Obama era. Public health advocates have long argued that cities like Los Angeles still have dangerous levels of smog, a leading cause of respiratory illness for millions of Americans, and have pushed to tighten existing rules. Industry groups, meanwhile, have been adamant that doing so would be exorbitantly expensive.

A Sushi Master’s Lament—and the One Fish You Should Always Avoid When a famous chef speaks out to warn the dining public about the dire straits of the world’s fisheries, that’s hardly news. “Sustainable seafood” probably ranks just behind “wild-caught” as the descriptor of choice on the menu of your average haute eatery these days. But when that chef is the most renowned sushi master on the planet, people listen. “I can’t imagine at all that sushi in the future will be made of the same materials we use today,” Jiro Ono said in an appearance this week. Microplastic Particles Move Up Marine Food Chain on B.C. Coast Plastic fibres and particles in West Coast waters are being consumed and passed up the food chain by tiny marine creatures that apparently mistake them for food, according to a new study from the Vancouver Aquarium Marine Science Centre. Researcher Peter Ross and his colleagues found plastic litter in the digestive systems of two key species of plankton that are eaten in large numbers by salmon and baleen whales. Adult salmon returning to the Strait of Georgia may be consuming up to 91 plastic particles a day by eating plankton, and juveniles leaving fresh water up to seven particles a day, while a humpback whale could ingest more than 300,000 particles a day, according to the researchers’ estimates. Several recent studies have documented ingestion of plastics in the wild by fish, bivalves and crustaceans. Plastic particles have also been detected in the scat of marine mammals. “Most salmon species feed heavily on (plankton) during their juvenile and adult life stages,” said Ross.

Do You Live in a Resilient City? Climate Change, Resilience, Revalue Ecosystems, Secure Livelihoods, Transform Cities A version of this post originally appeared on 100 Resilient Cities. 1. Your commute options aren’t limited to a car. You can take advantage of bike sharing… Bike share programs make short-term bicycle rentals available to the public via unattended stations, combining the convenience and flexibility of a private vehicle with the accessibility and reliability of mass transit. Nation's water challenges are many, but so are the solutions This Friday, Sept. 4, 2015 photo shows construction of the Carlsbad, Calif., desalination plant between Interstate 5 and the Pacific Ocean. Climate change and drought have stretched water supplies from coast to coast. The vast majority of 50 state water officials surveyed by the federal government expect shortages to affect them over the next 10 years. Photo: Lenny Ignelzi, AP This Friday, Sept. 4, 2015 photo shows construction of the...

Skip the Car Charger: Roads With a Jolt of Electricity Are Coming to the U.K. Sure, ditching a gas guzzler in favor of an ultra-low-emission, electricity-powered vehicle is better for the environment. But what happens if you’re on a road trip, your electric car’s battery runs out of juice, and—horror—there’s no outlet around to plug in for a recharge? Eliminating the possibility of that nightmare scenario is at the heart of an effort announced late last week by government officials across the pond.