Facts about Ancient Greece for Kids 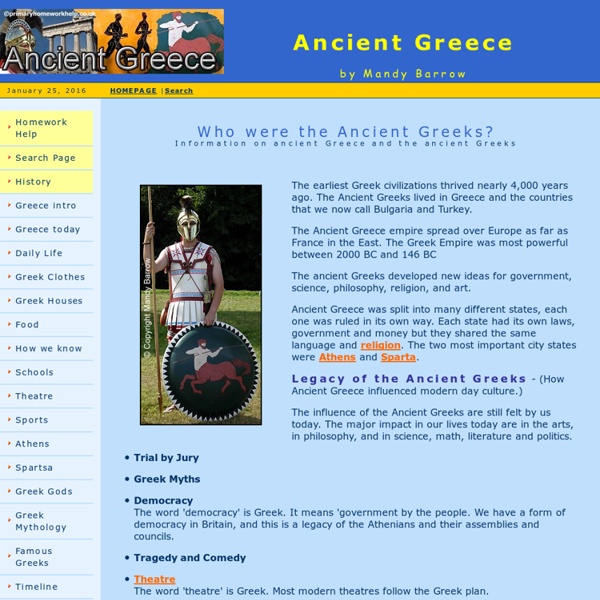 The earliest Greek civilizations thrived nearly 4,000 years ago. The Ancient Greeks lived in Greece and the countries that we now call Bulgaria and Turkey. The Ancient Greece empire spread over Europe as far as France in the East. The Greek Empire was most powerful between 2000 BC and 146 BC The ancient Greeks developed new ideas for government, science, philosophy, religion, and art. Ancient Greece was split into many different states, each one was ruled in its own way. - (How Ancient Greece influenced modern day culture.) The influence of the Ancient Greeks are still felt by us today. Trial by Jury Greek Myths Democracy The word 'democracy' is Greek. Related:  vcohen

Rome Reborn Mission Rome Reborn is an international initiative whose goal is the creation of 3D digital models illustrating the urban development of ancient Rome from the first settlement in the late Bronze Age (ca. 1000 B.C.) to the depopulation of the city in the early Middle Ages (ca. A.D. 550). With the advice of an international Scientific Advisory Committee, the leaders of the project decided that A.D. 320 was the best moment in time to begin the work of modeling. History Since 1997, the Virtual World Heritage Laboratory of the University of Virginia (VWHL), the UCLA Experiential Technology Center (ETC), the Reverse Engineering Lab at the Politecnico di Milano, the Ausonius Institute of the CNRS and the University of Bordeaux-3, and the University of Caen have collaborated on a project to create a digital model of ancient Rome as it appeared in late antiquity. Purpose of the 3D model Constituent parts of the model The digital model reflects the sources of our knowledge about ancient Rome.

Ancient Greece Ancient Greece - Q-files Encyclopedia The Parthenon is a temple to the goddess Athena, completed in 432 BC. It was built in the Acropolis of Athens, the ancient citadel located on a rocky outcrop. The Parthenon (top) in Athens, built in 432 BC About 2500 years ago, Greece enjoyed a time of wealth, discovery and invention. A map of Greece in around 500 BC A map of Greece in about 500 BC Greek city-states Greece civilization grew up around the shores and islands of the Aegean Sea. This painting, called The School of Athens, by the Italian Renaissance artist Raphael, shows the Greek philosophers Plato (c.428–c.348 BC, left) and Aristotle (384–322 BC, right). The philosophers Plato (left) and Aristotle (right) Science and ideas The ancient Greeks had many ideas that have passed down to us today. Myths and drama Actors perform a play in an amphitheatre while the work of an ancient Greek town continues around them. Actors perform in an amphitheatre. The Greeks loved to listen to music, poetry and songs. Consultant: Philip Parker Timeline

History: Ancient Rome for Kids Back to History for Kids Ancient Rome was a powerful and important civilization that ruled much of Europe for nearly 1000 years. The culture of Ancient Rome was spread throughout Europe during its rule. As a result, Rome's culture still has an impact in the Western world today. The basis for much of Western culture comes from Ancient Rome, especially in areas such as government, engineering, architecture, language, and literature. The city of Rome is the capital of Italy today Map of Italy from the CIA World Factbook The Roman Republic Rome first grew into power as a Republic. The Republic would rule Rome for hundreds of years from around 509 BC to 45 BC. The Roman Empire In 45 BC Julius Caesar took over the Roman Republic and made himself the supreme dictator. The Roman Forum was the center of government Photo by Adrian Pingstone The Empire Splits As the Roman Empire grew it became more and more difficult to manage from the city of Rome. Fall of Rome Fun Facts about Ancient Rome Works Cited

Ancient Greek Instruments Kithara Lyra: originally called Chelys, because of the tortoise shell used as its sound box. According to Nicomachus of Gerasa (Ist cent. AD), the tortoise-shell Lyra was invented by god Hermes, who gave it to Orpheus. We don't know how many strings the original Lyras had. Cithara plucked instrument with 5 strings originally, but later with as many as 12 strings. Barbitos or Barbiton is an instrument of the Lyra family and resembles a Lyra, but it has longer arms and narrower sound box. Phorminx probably the oldest of the Cithara type instruments. Epigonion belongs to the psaltery family and it is the instrument with the largest number of strings, sometimes as many as forty (Polydeuces). Pandouris or pandourion, also called trichord because it had three strings, is the first fretted instrument known, forerunner of the various families of lutes worldwide.

Ancient Rome The Ancient Romans The Italian Peninsula was home to a people that would eventually rule most of the known world. The story of how this small village, which was named Rome, grew into the most powerful empire in the world is one of war, luck, and intrigue. According to legend, the city-state of Rome was founded by a young man named Romulus. Whether or not Romulus was a real person is not known. It is believed that around 750 B.C., the village leaders met together and decided to form a single government for all the united villages, forming for the first time a united Roman city-state.