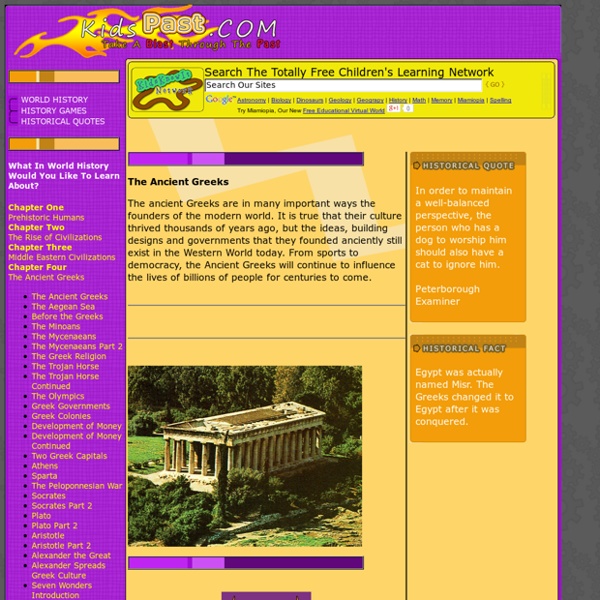 Facts about Ancient Greece for Kids The earliest Greek civilizations thrived nearly 4,000 years ago. The Ancient Greeks lived in Greece and the countries that we now call Bulgaria and Turkey. The Ancient Greece empire spread over Europe as far as France in the East. The Greek Empire was most powerful between 2000 BC and 146 BC The ancient Greeks developed new ideas for government, science, philosophy, religion, and art. Mayan Family The five subfamilies of Mayan languages are: There are numerous ruins of the ancient Mayan civilization in the states of Chiapas and Yucatan, as well as in Guatemala. These archeological sites and the artifacts discovered in them display a highly developed aesthetic sense—in stone sculpture, ceramic work, the casting of precious metals, mosaics, and the carving of crystal and jade—all of these produced without metal tools. The Mayas had invented the abstract symbol of zero to simplify mathematics long before it was in use in Europe, and the Mayan calendar was older and more efficient than the Julian calendar that was in use by the Spaniards who conquered Mexico. In the 1950s one could distinguish what area people came from by the distinctive clothing of both men and women.

History: Ancient Greece for Kids Ancient Greece was a civilization that dominated much of the Mediterranean thousands of years ago. At its peak under Alexander the Great, Ancient Greece ruled much of Europe and Western Asia. The Greeks came before the Romans and much of the Roman culture was influenced by the Greeks. Ancient Greece formed the foundation of much of Western culture today. Everything from government, philosophy, science, mathematics, art, literature, and even sports was impacted by the Ancient Greeks. Acropolis in Athens Rome Reborn Mission Rome Reborn is an international initiative whose goal is the creation of 3D digital models illustrating the urban development of ancient Rome from the first settlement in the late Bronze Age (ca. 1000 B.C.) to the depopulation of the city in the early Middle Ages (ca. A.D. 550). With the advice of an international Scientific Advisory Committee, the leaders of the project decided that A.D. 320 was the best moment in time to begin the work of modeling.

HISTORY OF THE MAYA The Maya then and now: from 1500 BC The Maya, occupying the triangle of land framed by the Gulf of Mexico, the Caribbean Sea and the Pacific Ocean, have the longest identifiable history of any American people. Social customs, language and physical characteristics (such as unusually round heads) suggest an unbroken link between the American Indians living in the region today and their predecessors 3500 years ago. Ancient Greece - Q-files Encyclopedia The Parthenon is a temple to the goddess Athena, completed in 432 BC. It was built in the Acropolis of Athens, the ancient citadel located on a rocky outcrop. The Parthenon (top) in Athens, built in 432 BC History: Ancient Rome for Kids Back to History for Kids Ancient Rome was a powerful and important civilization that ruled much of Europe for nearly 1000 years. The culture of Ancient Rome was spread throughout Europe during its rule. As a result, Rome's culture still has an impact in the Western world today. The basis for much of Western culture comes from Ancient Rome, especially in areas such as government, engineering, architecture, language, and literature. The city of Rome is the capital of Italy today Map of Italy from the CIA World Factbook

Olmec Civilization - Timeline and Definition Olmec: An Introduction The Olmec civilization is the name given to a sophisticated central American culture with its heyday between 1200 and 400 BC. The Olmec heartland lies in the Mexican states of Veracruz and Tabasco, at the narrow part of Mexico west of the Yucatan peninsula and east of Oaxaca. The following is an introductory guide to the Olmec civilization, its place in Central American prehistory, and some important facts about the people and how they lived. Olmec Timeline Initial Formative: 1775-1500 cal BC Early Formative: 1450-1005 cal BC Middle Formative: 1005-400 cal BC Late Formative: 400 cal BC

Ancient Greek Instruments Kithara Lyra: originally called Chelys, because of the tortoise shell used as its sound box. According to Nicomachus of Gerasa (Ist cent. AD), the tortoise-shell Lyra was invented by god Hermes, who gave it to Orpheus. Ancient Rome The Ancient Romans The Italian Peninsula was home to a people that would eventually rule most of the known world. The story of how this small village, which was named Rome, grew into the most powerful empire in the world is one of war, luck, and intrigue.

History and Details on Olmec Art and Sculpture Olmec Art and Sculpture: The Olmec culture was the first great Mesoamerican civilization, developing along Mexico's gulf coast from about 1200-400 B.C. before going into a mysterious decline. The Olmec were very talented artists and sculptors who are today best remembered for their monumental stonework and cave paintings. Facts about Romans for Kids - Roman Britain Homework help The Romans came to Britain nearly 2000 years ago and changed our country. Even today, evidence of the Romans being here, can be seen in the ruins of Roman buildings, forts, roads, and baths can be found all over Britain. The Romans invaded other countries too.