A 3-D View of a Chart That Predicts The Economic Future: The Yield Curve 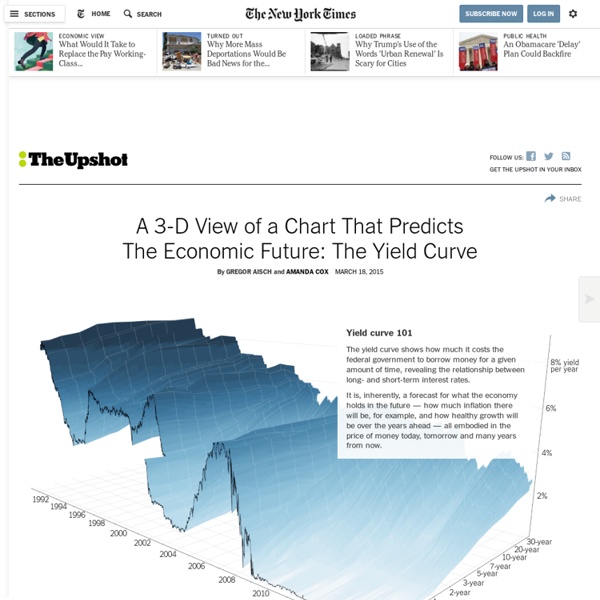 The Rich Live Longer Everywhere. For the Poor, Geography Matters. Life expectancy of 40-year-olds with household incomes below $28,000, adjusted for race* For poor Americans, the place they call home can be a matter of life or death. The poor in some cities — big ones like New York and Los Angeles, and also quite a few smaller ones like Birmingham, Ala. — live nearly as long as their middle-class neighbors or have seen rising life expectancy in the 21st century. But in some other parts of the country, adults with the lowest incomes die on average as young as people in much poorer nations like Rwanda, and their life spans are getting shorter.

Download 422 Free Art Books from The Metropolitan Museum of Art You could pay $118 on Amazon for the Metropolitan Museum of Art’s catalog The Art of Illumination: The Limbourg Brothers and the Belles Heures of Jean de France, Duc de Berry. Or you could pay $0 to download it at MetPublications, the site offering “five decades of Met Museum publications on art history available to read, download, and/or search for free.” If that strikes you as an obvious choice, prepare to spend some serious time browsing MetPublications’ collection of free art books and catalogs. You may remember that we featured the site a few years ago, back when it offered 397 whole books free for the reading, including American Impressionism and Realism: The Painting of Modern Life, 1885–1915; Leonardo da Vinci: Anatomical Drawings from the Royal Library; and Wisdom Embodied: Chinese Buddhist and Daoist Sculpture in The Metropolitan Museum of Art. Related Content:

When Does it Pay to Take Social Security Early? Dear Savvy Senior, I will turn 62 in a few months and am trying to decide when to start taking my Social Security retirement benefits. Almost everything I read on this topic tells me it’s better to wait until my full retirement age or beyond. Is there ever a good reason to start early? Dear Ready, You’re right! Most financial planners agree that waiting to take your Social Security retirement benefits is a smart financial move. 2016 U.S. Elections: 50 Interactive visualizations to explore In just a few hours, the 2016 Presidential election in the United States enters a new level, with the first debate between the Democrat candidate, Hillary Clinton and her Republican opponent, Donald Trump. And in this particular election, to “get to another level” is saying a lot, because, let’s face it, the bar is already pretty high – or pretty low, depending on your point of view. An unprecedented election in so many ways, none of which as significant as the fact that it’s the first time a woman gets nominated by a major american party to run for President. Hillary Clinton will hopefully make history in November, 8, and today she has an unique opportunity take a major step towards that end. The first of three debates will be held at Hofstra University in Hempstead, N.Y., moderated by Lester Holt, the anchor of NBC Nightly News.

Thinglink : 7 façons pour les journalistes d’utiliser l’image interactive Toute l'actualité amaytoisewww.lavenir.net Bloc Etat-Majorwww.lavenir.net Une salle de sport sera construite ici Bloc maintenance et instructionwww.lavenir.net China just announced one of the largest single layoffs in history Branko Milanovic looks at the big picture. During his dozen years as chief economist of the World Bank’s Research Department, he focused on making sense of the all-important economic question that many economists, paradoxically, seem uninterested in: How are people doing? It’s a deceptively difficult question. To answer it you must determine what you mean by “people.” The average person?

The war on drugs, explained in one video — with dragons Instead of significantly reducing drug use, the war on drugs provides a black market of illicit drugs that criminal organizations around the world can rely on for revenue that payrolls other, more violent activities. As a result, when the war on drugs displaces drug production, it also displaces violence related to the drug trade. In several cases, this has thrown countries into serious internal turmoil.