HISTORY OF THE MAYA 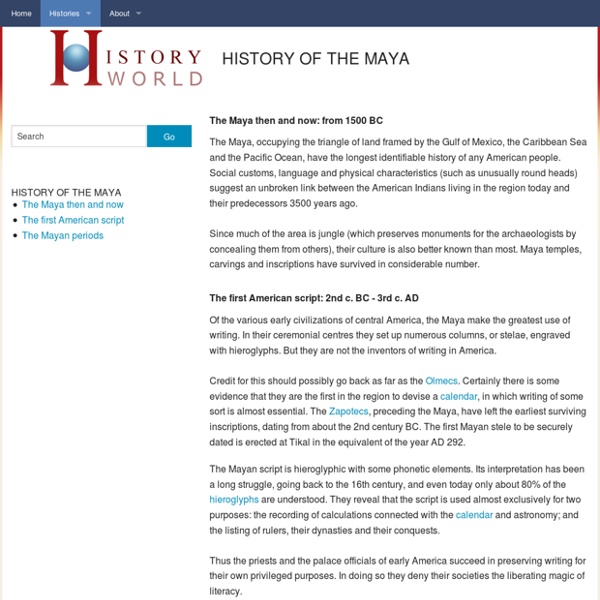 The Maya then and now: from 1500 BC The Maya, occupying the triangle of land framed by the Gulf of Mexico, the Caribbean Sea and the Pacific Ocean, have the longest identifiable history of any American people. Social customs, language and physical characteristics (such as unusually round heads) suggest an unbroken link between the American Indians living in the region today and their predecessors 3500 years ago. Since much of the area is jungle (which preserves monuments for the archaeologists by concealing them from others), their culture is also better known than most. Maya temples, carvings and inscriptions have survived in considerable number. The first American script: 2nd c. Of the various early civilizations of central America, the Maya make the greatest use of writing. Credit for this should possibly go back as far as the Olmecs. The Mayan script is hieroglyphic with some phonetic elements. The Mayan periods: 1500 BC -1542 The Spanish bring the Post-Classic age to an abrupt end.

Mayan hieroglyphic writing Mayan hieroglyphic writing, system of writing used by the Maya people of Mesoamerica until about the end of the 17th century, 200 years after the Spanish conquest of Mexico. (With the 21st-century discovery of the Mayan site of San Bartolo in Guatemala came evidence of Mayan writing that pushed back its date of origin to at least 300 or 200 bc.) It was the only true writing system developed in the pre-Columbian Americas.

Greatest Aztec Image above by Guido Galvani and María Sánchez Vega, courtesy Templo Mayor project, National Institute of Anthropology and History, MexicoPhotographs by Kenneth Garrett and Jesús López On the edge of Mexico City's famed Zócalo plaza, next to the ruins of the Aztec sacred pyramid known as the Templo Mayor, the remains of an animal—perhaps a dog or a wolf—were discovered. It had been dead for 500 years and lay in a stone-lined shaft eight feet deep.

History for Kids: Aztecs, Maya, and Inca Back to History The three most dominant and advanced civilizations that developed in the Americas prior to the arrival of the Europeans were the Aztecs, the Maya, and the Inca. Aztecs The Aztec Empire was located in central Mexico. Unearthing the Mayan Creation Myth Archaeologists who have uncovered two massive carved stucco panels in the Mirador Basin of Gua­temala’s northern rain forest say they are the earliest known representation of the Mayan creation myth, predating other such artifacts by a millennium. According to the researchers, the panels—26 feet long and 20 feet high, with images of monsters, gods, and swimming heroes—date to 300 B.C. They formed the sides of a channel that carried rainwater into a complex system of stepped pools, where it was stored for drinking and agriculture.

Aztecs (Mexica) During the twelfth century AD the Mexica were a small and obscure tribe searching for a new homeland. Eventually they settled in the Valley of Mexico and founded their capital, Tenochtitlan, in 1345. At the beginning of the sixteenth century it was one of the largest cities in the world. Warfare was extremely important for the Mexica people and led them to conquer most of modern-day central and southern Mexico. They controlled their huge empire through military strength, a long-distance trading network and the tribute which conquered peoples had to pay. Stone sculpture in the British Museum collection reflects the Mexica's complex religious beliefs and the large pantheon of gods they worshipped.

Maya numerals Maya numerals Numbers above 19[edit] Numbers after 19 were written vertically in powers of twenty. For example, thirty-three would be written as one dot above three dots, which are in turn atop two lines. The first dot represents "one twenty" or "1×20", which is added to three dots and two bars, or thirteen. Therefore, (1×20) + 13 = 33.

Intense droughts blamed for Mayan collapse - 13 March 2003 The Mayan civilisation of Central America collapsed following a series of intense droughts, suggests the most detailed climatic study to date. The sophisticated society of the Maya centred on large cities on the Yucatán peninsula, now part of Mexico. Their population peaked at 15 million in the 8th century, but the civilisation largely collapsed during the 9th century for reasons that have remained unclear to this day. Now, researchers studying sediment cores drilled from the Cariaco Basin, off northern Venezuela, have identified three periods of intense drought that occurred at 810, 860 and 910AD. These dates correspond to the three phases of Mayan collapse, the scientists say. Furthermore, the entire 9th century suffered below average rainfall, "so it was a dry period with three intense droughts", says Gerald Haug, from ETH in Zurich, Switzerland, who led the research.

Aztec Calendar : Mexico Culture & Arts Dale Hoyt Palfrey Mexica/Aztec Calendar Systems The Civil Calendar The solar year was the basis for the civil calendar by which the Mexicas (Aztecs) determined the myriad ceremonies and rituals linked to agricultural cycles. The calendar was made up of 18 months, each lasting 20 days. The months were divided into four five-day weeks. Mayan Family The five subfamilies of Mayan languages are: There are numerous ruins of the ancient Mayan civilization in the states of Chiapas and Yucatan, as well as in Guatemala. These archeological sites and the artifacts discovered in them display a highly developed aesthetic sense—in stone sculpture, ceramic work, the casting of precious metals, mosaics, and the carving of crystal and jade—all of these produced without metal tools. The Mayas had invented the abstract symbol of zero to simplify mathematics long before it was in use in Europe, and the Mayan calendar was older and more efficient than the Julian calendar that was in use by the Spaniards who conquered Mexico. In the 1950s one could distinguish what area people came from by the distinctive clothing of both men and women. Now many are buying clothing in stores, especially the men.

Climate Change Killed off Maya Civilization, Study Says The drought theory is still controversial among some archeologists who believe a combination of overpopulation, an internecine struggle for control among the nobles, a weak economic base, and a political system that didn't foster power-sharing led to the Maya's collapse. One hypothesis suggests the Maya people themselves were responsible for their downfall as a result of environmental degradation, including deforestation. Defenders of the climate change theory, however, say the droughts sparked a chain of events that led to the demise of the Maya.

Aztec Math Decoded, Reveals Woes of Ancient Tax Time April 3, 2008 Today's tax codes are complicated, but the ancient Aztecs likely shared your pain. To measure tracts of taxable land, Aztec mathematicians had to develop their own specialized arithmetic, which has only now been decoded. Mayan Civilization City of Copan, Honduras Copán, called Xukpi by its residents, rises out of the mist of western Honduras, in a pocket of alluvial soil amid rugged topography. It is arguably one of the most important royal sites of the Maya civilization. Occupied between AD 400 and 800, Copán covers over 50 acres of temples, altars, stelae, ball courts, several plazas and the magnificent Hieroglyphic Stairway. The culture of Copán was rich in written documentation, today including detailed sculptural inscriptions, which is very rare in precolumbian sites. Sadly, many of the books--and there were books written by the Maya, called codices--were destroyed by the priests of the Spanish invasion.

Mayan Numbers" Along with their calendars -- the Tzolk'in, the Haab and the Long Count -- the Mayans also created their own math system. They used a series of dots and bars to signify numbers. One dot equaled one unit, while one bar equaled five units.