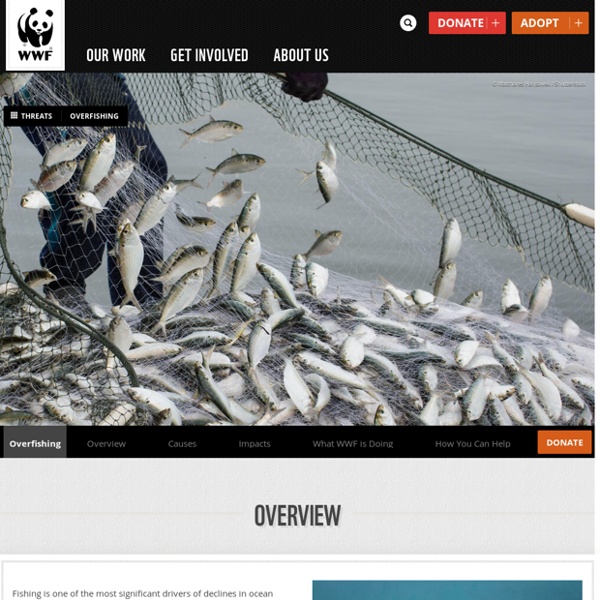 Fishing is one of the most significant drivers of declines in ocean wildlife populations. Catching fish is not inherently bad for the ocean, except for when vessels catch fish faster than stocks can replenish, something called overfishing. The number of overfished stocks globally has tripled in half a century and today fully one-third of the world's assessed fisheries are currently pushed beyond their biological limits, according to the Food and Agriculture Organization of the United Nations. Overfishing is closely tied to bycatch—the capture of unwanted sea life while fishing for a different species. The damage done by overfishing goes beyond the marine environment. Many people who make a living catching, selling, and buying fish are working to improve how the world manages and conserves ocean resources. Related:  Overfishing; Exploitation of the oceans; Unsustainable aquaculture

Overfishing -- National Geographic Ocean overfishing is simply the taking of wildlife from the sea at rates too high for fished species to replace themselves. The earliest overfishing occurred in the early 1800s when humans, seeking blubber for lamp oil, decimated the whale population. Some fish that we eat, including Atlantic cod and herring and California's sardines, were also harvested to the brink of extinction by the mid-1900s. Highly disruptive to the food chain, these isolated, regional depletions became global and catastrophic by the late 20th century. When It Started Marine scientists know when widespread overfishing of the seas began. In the mid-20th century, international efforts to increase the availability and affordability of protein-rich foods led to concerted government efforts to increase fishing capacity. But by 1989, when about 90 million tons (metric tons) of catch were taken from the ocean, the industry had hit its high-water mark, and yields have declined or stagnated ever since. When It Will End

Fisheries Campaign - Australian Marine Conservation Society Australia is home to some amazing marine wildlife, much of which is found nowhere else on the planet. Our ocean is a global biodiversity hotspot. We have over 320 different species of sharks and rays, and 70 of these species are unique to Australia, found nowhere else on earth! Unfortunately, commercial fishing using trawlers, gillnets and longlines puts our ocean wildlife at risk. Snubfin dolphins and dugongs drown in gillnets set in the Great Barrier Reef Marine Park to catch barramundi. Seabirds and turtles are killed on longlines set to catch tuna. Overfishing of once abundant species has led to some species being listed as threatened, such as gulper and school sharks, because they have been fished too hard for too long. In a world with an ever-expanding population, we need to ensure that we maintain healthy oceans while we’re taking from the sea, so that we can ensure a future full of fish for generations to come.

Oceans, Whales & Seafood. Help protect marine life | Greenpeace Half the oxygen we breathe comes from our oceans. One of our world’s most stunning features, they cover more than 70 percent of the planet, comprise 99 percent of its habitable space, and house the greatest diversity of major plant, animal, and microbial species, from the simplest to the mightiest on earth. Their importance to all life cannot be underestimated. Oceans regulate the climate, produce half of the earth’s breathable oxygen, and are a huge source of food. For the one billion coastal humans who depend directly upon them, the oceans are life itself. And because of some pretty careless industrial human activity, our oceans are in a lot of trouble right now. We’ve made significant progress to turn the tide towards ocean conservation, but a lot more needs to be done in a short time. Ensuring Sustainable Seafood The problems taxing the ocean are caused directly by what's available at the seafood counter. Spotlight on Tuna Tuna is one of the world's favorite fish. Saving Whales

Overfishing -- Pristine Seas -- National Geographic Ocean overfishing is simply the taking of wildlife from the sea at rates too high for fished species to replace themselves. The earliest overfishing occurred in the early 1800s when humans, seeking blubber for lamp oil, decimated the whale population. Some fish that we eat, including Atlantic cod and herring and California's sardines, were also harvested to the brink of extinction by the mid-1900s. Highly disruptive to the food chain, these isolated, regional depletions became global and catastrophic by the late 20th century. When It Started Marine scientists know when widespread overfishing of the seas began. In the mid-20th century, international efforts to increase the availability and affordability of protein-rich foods led to concerted government efforts to increase fishing capacity. But by 1989, when about 90 million tons (metric tons) of catch were taken from the ocean, the industry had hit its high-water mark, and yields have declined or stagnated ever since. When It Will End

Oceans Are for Everyone - United Nations University Mary Frances Davidson This article is part of UNU’s “17 Days, 17 Goals” series, featuring research and commentary in support of the United Nations Sustainable Development Summit, 25-27 September 2015 in New York City. Goal #14: Conserve and sustainably use the oceans, seas and marine resources for sustainable development Whether you live on the coast, or on a landlocked mountaintop, the world’s oceans and seas impact your life. Oceans play a vital role in regulating the earth’s temperature and climate patterns, acting like a giant solar panel that soaks up heat from the sun and distributes it across the earth through a complex system of currents. The next time you take a deep breath of fresh air, thank an ocean. Oceans cover roughly 70% of the Earth’s surface, and contain an estimated 50%–80% of life on our planet. Despite the vital importance of oceans’ health for life on earth, the sad truth is that they are in trouble. Managing our natural wealth Measuring our success

Overfishing "There's enough on this planet for everyone's needs but not for everyone's greed" - Mahatma Gandhi For our children to have future income, food and pleasure we need healthy oceans and a healthy fishing industry. We need to create ocean sanctuaries to improve the state of our oceans and our fish populations. We need to vastly improve the way we fish, so it is not wasteful and damaging, but first we urgently need to stop taking fish faster than our oceans can replenish. It’s really simple housekeeping. But common sense is not working at the moment. Here are some facts and figures that may shock you: 63 percent of global fish stocks are now considered overfished. 40,000 jobs were lost with the collapse of just one overfished cod populationFishing fleets are heading to new waters because they have exhausted their old hunting grounds The fishing industry now has vessels that can go further, stay longer and catch more, easily out-fishing nature’s ability to replenish fish.

Overfishing: Can We Ever Reverse the Damage We’ve Done? The global numbers regarding fishing have gone from sustainable to straight-up devastating in just a few decades. Now, the creatures of the water have to fear about two more things in addition to human-made disasters - the rising water temperatures and plastic. There is no harm in fishing. But there is a difference between justified consumption and exploitation. In just half a century, over-fished stocked grew triple its size. Even if one species of fish gets wiped off from the earth, it is going to have a very drastic effect on the marine ecosystem. Defining overfishing is simple. Man’s desire to catch rare and magnificent forms of fishes began when we started to conquer the waters. Whaling saw a rapid rise in the mid-19th century, where we embarked on a journey to find blubber. Two years later, in 1929, the number of whales killed rose to 40,201. The whaling practices of this era were so devastating that it pushed eight species of whales to the endangered list in 1970.

Endangered Sea Turtles Burned In BP Spill Clean-up A recent Los Angeles Times article confirmed that sea turtles are being burned in the efforts to clean up the British Petroleum oil spill in the Gulf of Mexico. But according to a shrimp boat captain hired by BP and the Coast Guard to rescue sea turtles, workers are being actively blocked from their rescue efforts by the oil company and it’s 21,000 contractors. Shrimp boater Mike Ellis says that BP has shut down the sea turtle operation by preventing boats from getting to the turtles. As detailed in the LA Times story, controlled burns are part of the efforts to contain the oil spill. Sea tutles and other marine life are caught in the booms and the burn area and are burned along with the oil. As Daniel Tencer at Raw Story points out, the majority of the sea turtles affected by the oil spill are the endangered Kemp’s Ridleys. Watch the Mike Ellis interview by the Sea Turtle Restoration Project

Oceans fit for the future We stand with everyone who wants healthy oceans for our children, who want marine life to thrive and the fishing industry to give jobs and a future for millions. We will be part of the movement that works to create and protect clean seas that bring life to our planet. Healthy oceans can fight many impacts of climate change. Ocean sanctuaries, also known as marine reserves, teem with life, their waters are healthier and better able to resist or absorb the impacts of climate change. Scientists warn the subsequent rising sea levels will flood low-lying land and wipe out entire islands in our lifetime. Letting science and common sense determine how many fish we can catch instead of allowing greedy industries and politicians to decide would end overfishing overnight! The fishermen know it too, but rather than slow down, the majority of fishing companies are still netting and hooking faster than the fish can reproduce and we are already driving entire populations to collapse.