What it means to "hold space" for people, plus eight tips on how to do it well - Heather Plett 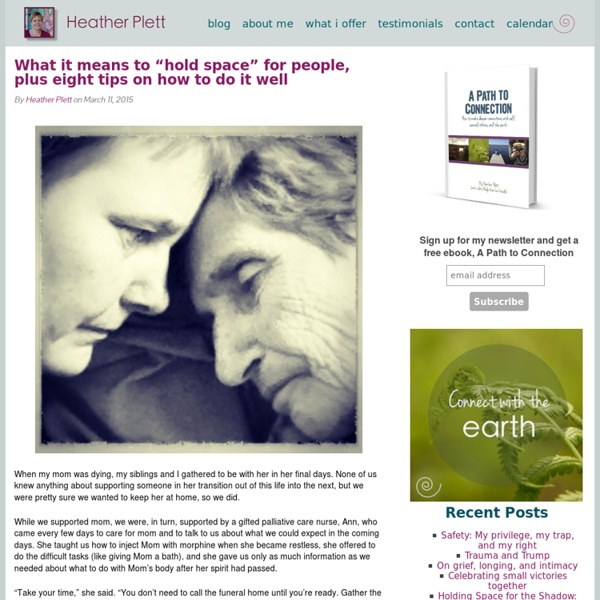 When my mom was dying, my siblings and I gathered to be with her in her final days. None of us knew anything about supporting someone in her transition out of this life into the next, but we were pretty sure we wanted to keep her at home, so we did. While we supported mom, we were, in turn, supported by a gifted palliative care nurse, Ann, who came every few days to care for mom and to talk to us about what we could expect in the coming days. She taught us how to inject Mom with morphine when she became restless, she offered to do the difficult tasks (like giving Mom a bath), and she gave us only as much information as we needed about what to do with Mom’s body after her spirit had passed. “Take your time,” she said. “You don’t need to call the funeral home until you’re ready. Ann gave us an incredible gift in those final days. In the two years since then, I’ve often thought about Ann and the important role she played in our lives. What does it mean to hold space for someone else?

The weird science of love Now playing Do our smells make us sexy? Popular science suggests yes — pheromones send chemical signals about sex and attraction from our armpits to potential mates. 7 Signs Your Havingness Level is Dangerously Low » BAD WITCHES witchery Published on December 20th, 2014 | by Carolyn Elliott Your havingness level is an internal barometer of how much good stuff you allow yourself to have before your “too good to be true!” You're Distracted. This Professor Can Help. - Technology By Marc Parry Seattle Matthew Ryan Williams for The Chronicle Before each class session, David Levy leads his students in a few minutes of meditation. To complete her homework assignment, Meran Hill needed total concentration.

Top 20 Vampires in Books & Literature - Amazing Stories Vampires have been and will always be a wonderful creature that runs through the pages of comic books, graphic novels and literary books, but these few stand out as some of the best of the lot. Of course choosing vampires in literature is always a daunting task, and as such, is entirely subjective. 1. Lestat from The Vampire Lestat by Anne Rice Lestat de Lioncourt from Anne Rice’s Vampire Chronicles. 25 Social Media Channels You're Probably Not Using Now Chances are your small business has used social media in one way or another. There are the big guns like Facebook, Twitter, and LinkedIn. And other familiar names like Instagram, Pinterest, and Vine.

worrying-about-stuff-is-a-sign-of-intelligence The tendency to worry about stuff could be a sign of a certain kind of intelligence, according to a paper in an upcoming edition of the journal Personality and Individual Differences (hat tip to Christian Jarrett at the British Psychology Society's Research Digest for spotting it first). A team led by Alexander Penney of Ontario's Lakehead University gave 126 undergrads a litany of surveys and questionnaires designed to measure both their intelligence and how much they tended to stress about events in their lives. (For instance, they were asked how strongly they agreed with statements like, "I am always worried about something.") After analyzing the results, Penney and his team found a correlation between worrying and verbal intelligence. Correlation doesn't imply causation, of course, but this is not the first paper to have found a link between anxiety and intelligence.

10 places where anyone can learn to code Teens, tweens and kids are often referred to as “digital natives.” Having grown up with the Internet, smartphones and tablets, they’re often extraordinarily adept at interacting with digital technology. But Mitch Resnick, who spoke at TEDxBeaconStreet, is skeptical of this descriptor. Sure, young people can text and chat and play games, he says, “but that doesn’t really make you fluent.” 40 Most Popular Social Networking Sites of the World "Social networking" has been around forever. It's the simple act of expanding the number of people you know by meeting your friends' friends, their friends' friends and so on. In fact, many of us today use Twitter and Facebook to promote our existing and upcoming businesses. We’re clean eating our way to new eating disorders Because overdoing it is the American way, we’ve now managed to warp even healthy habits into a new form of eating disorders. Welcome to the era of orthorexia. As Heather Hansman notes this week in Fast Company, orthorexia differs from other forms of disorders in that the obsessive focus is not on how much or how little one consumes, but the perceived virtue of the food itself. As she reports, “Nutritionists and psychologists say that they’re seeing it more often, especially in the face of restrictive food trends, like gluten-free, and growing information about where food comes from, and how it’s grown and processed.” Though the term has been in use since Dr. Steven Bratman coined it in 1997, the uptick in cases is leading to a new push to formally include it in the American Psychiatric Association’s Diagnostic and Statistical Manual of Mental Disorders – aka the DSM 5.

40 maps that explain the world Maps can be a remarkably powerful tool for understanding the world and how it works, but they show only what you ask them to. So when we saw a post sweeping the Web titled "40 maps they didn't teach you in school," one of which happens to be a WorldViews original, I thought we might be able to contribute our own collection. Some of these are pretty nerdy, but I think they're no less fascinating and easily understandable. A majority are original to this blog, with others from a variety of sources. I've included a link for further reading on close to every one. [Additional read: How Ukraine became Ukraine and 40 more maps that explain the world]

Why Do Men Prefer Nice Women?: Responsiveness and Desire - Society for Personality and Social Psychology Friday, July 25, 2014 (0 Comments) Posted by: Jen Santisi People's emotional reactions and desires in initial romantic encounters determine the fate of a potential relationship. Responsiveness may be one of those initial "sparks" necessary to fuel sexual desire and land a second date.