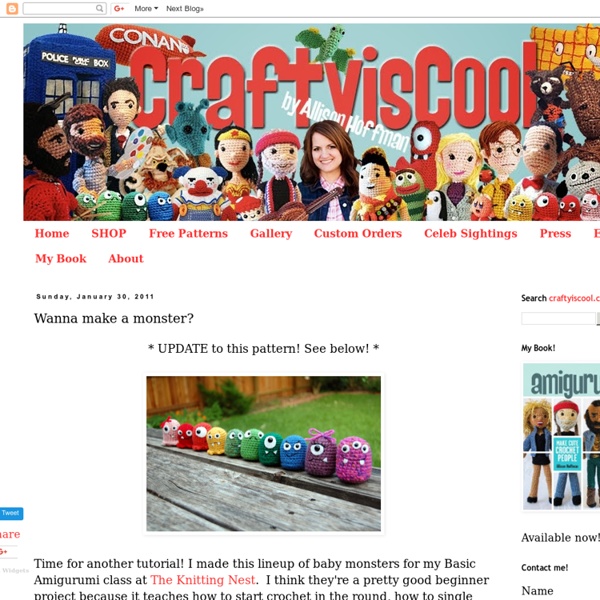 * UPDATE to this pattern! See below! * Time for another tutorial! I made this lineup of baby monsters for my Basic Amigurumi class at The Knitting Nest. I think they're a pretty good beginner project because it teaches how to start crochet in the round, how to single crochet, how to increase, and basic construction and customization of amigurumi. Baby Monster's Guide to Basic Amigurumi You'll need the following stuff: Small amount of worsted weight yarnSize E Crochet hook (or your favorite)Plastic safety eyes (I used 6 mm, but you can use whatever makes your monster happy!) Head/Body: Begin by making a ring with your yarn as shown. Insert the hook into the front of the ring and hook your working yarn (the yarn coming from the the ball) with the hook. Wrap the working yarn around the hook from behind and pull through the loop on your hook. You will now single crochet six stitches into the ring. To make the circle grow, you will increase by crocheting two times into each stitch. Base:

MONSTERS Mix and Match Plushies Pattern PDF These Monster Plushies are NOT the scary kind – they're just a little bit cooky and very cuddly! They are also brilliant for using up scraps of fleece and they make awesome gifts for ‘hard to buy for’ friends, teenagers... well, kids of any age, (big kids included here too!)This simple pattern will be fun to make in all sorts of colours so have fun mixing and matching! RECOMMENDED FABRICSFleece, of any type, stretch fabrics eg. velour, chenille and flannelette.

Invisible Decrease Invisible Decrease Link easily to this tutorial in your patterns: www.planetjune.com/invdec If you’ve been making amigurumi, you may be lamenting the gap or bump that forms when you decrease. Happy Geisha So I've finally got around to making my own pattern. The other day I saw a geisha doll and decided to crochet one myself. Here is a picture of it... and a picture of the back which has a flower on it... So here is the pattern, I would love it if you would like to make one and give me feedback on what you think of the pattern, and if it has any hiccups.

Free crochet pattern, free crocheting patterns Don't forget to bookmark this page :o) Most of the patterns listed here are my original designs. There are several patterns posted here with permission from the designers. Crochet Dungaree Pattern Making things for babies and toddlers is always a pleasure for me, I love searching the web for new patterns and idea’s. There are so many beautiful free patterns to be found but most of them are for little girls, I always find it harder to find nice boy patterns especially in crochet so I have made this pattern for the little boys, but of course they would be fine for little girls too. This is a very simple pattern and very easy and quick to work up, I have included all measurements so that if your tension is different it won’t matter so much. Measurements To fit child 1 year-18 months. Length: - 41cm from beg

Pillow Personality with Fairfield Processing: Playful Stuffed Crocodile "Tick Tock, Cap'n... Tick, Tock... someone is coming!" I don't know about you, but I spent a good chunk of my childhood hoping, wishing, dreaming I could fly like Peter Pan. Free Amigurumi Crochet Patterns with love for the Nerdy » » Amigurumi Kirby with Pattern and Bonus Smash Brothers hats! Kirby Amigurumi Pattern My Kirby pattern has been a long time coming, mainly because I got too ambitious with Super Smash Brothers versions to finish and post it. Initially, in honour of the recent release of Kirby’s epic yarn, the project was going to include patterns for 10 or so Kirby hats, so that he could be more epic and morph into his various SSB versions and be Link Kirby, Mario Kirby, Wario Kirby, you get the idea. As with most things I do though, I got distracted and started working on other stuff and finished up the Mario and Peach hats only, so these will have to do for now. I might make more later, but if my fabulous readers make a Kirby and decide to make him a SSMB hat, email me photos and the pattern if you are kind enough to share and I will post it with credit. As with all my patterns, Kirby is free.

How-to: Mattress Stitch For a lot of knitters, seaming finished pieces together is their least favorite part of of a project—it’s time-consuming and can turn out so ugly. But for those who have joined the cult of mattress stitch, the technique of sewing pieces together on the right side for a virtually invisible seam, finishing is a relatively effortless and almost magical process. Mattress stitch is also a very handy skill for making great looking knitted toys. There are several good mattress stitch tutorials on the web, but since there are some specific issues with seaming toys that aren’t found so much in garment knitting, I thought it might be helpful to do a toy-specific tutorial on the techniques. In this post, I’ll cover the basic “flat” seaming: vertical, horizontal, and vertical-to-horizontal mattress stitch. Then I’ll demonstrate how to use mattress stitch to sew on a 3-dimensional limb, such as an arm, and also how to sew on a limb at an angle.