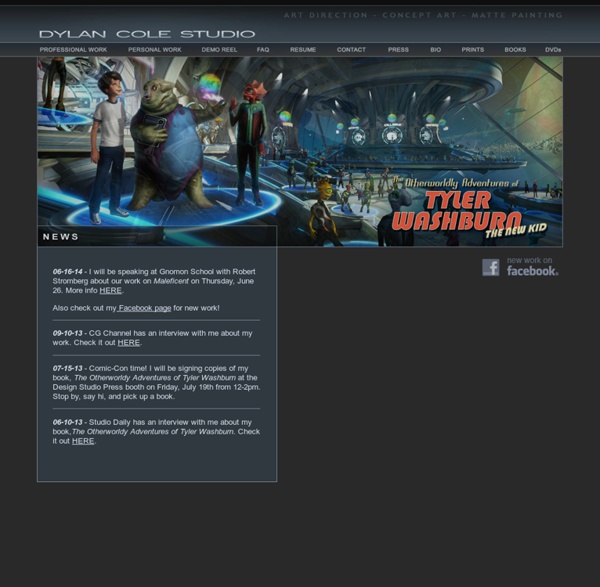 Downloads « Shaddy Safadi Digital Painting DREAM TEAM – 2! The TWELVE brushes to rule them all for digital painting. Most of these brushes have been taken (read stolen) from great artists like Jamie Jones. and then tweaked and adjusted over the years. They are designed to be multi-purpose brushes that FEEL like many of the natural elements you will come across while painting without being cutout stamps of them. Each brush has been vetted over the years, not just for its one time handiness, but because it returns to the top of the set again and again. Kyle Marshall One more plug for Jimmy Two Shoes before it premiere's here in Canada on Teletoon this Saturday at 7am!....so, maybe go to bed now, so you can rest up real good for the 7am Saturday mourning viewing. We had a talented crew directed by Jeff Barker (who also boarded one of the best episodes 'Masked Jackhammer') and Sean Scott, with designs by Josh Gay, Darren Ward, Dave Merritt, Dave Boudreau, Steve Harris and boards by Phil Lafrance, Jamie Leclaire, Helder Mendonca, Nick Cross, Riccardo Durante, Simon Paquette, Steve Stefanelli, Jose Pou, Jordan Voth, Mike Smukavic, Steve Whitehouse, Blayne Burnside, Ted Collyer and many more...........and animated by one of the best animation teams this side of the 49th! As shows are aired I'll start posting designs, and as a few have already aired on Disney XD, here be a few of them I did over a year ago now for the first couple episodes.

Art of Francis Tsai » environment design space opera: Galactic Imperium Orbital Station N-128 A finalized design, finally. Well, probably still time for some tweakage. Wanted to get some of that 70s era, Joe Johnston/Nilo Rodis-Jamero practical model feel for some of these ships and outer space locations. The earlier concept sketch is at the bottom. Originally I had a vertical slit for the main hangar space, but that was not going to be practical for the scenes taking place in there.

The Battletown Gallery Newtownards Gallery Artists Studio Home About Us Contact & Find Us The Lantern Factory Hello the intertubes! sorry for the brief lapse of promised content! Today I wanted to share the Scribe! My brief for the character was a fat fat corrupted angel who had sat on his angelic throne for eons recording the histories of heaven. He needed to come across as a villain, but also to convey a sense of helplessness when his boss fight was over. Frank Frazetta - Fantasy Artist In 1964 Frank Frazetta's painting of Ringo Starr for Mad Magazine caught the attention of United Artists (makers of James Bond) and was approached to do the movie poster for the 1965 film "What's New Pussycat?" and earned $4000 afternoon, roughly a years salary in those days. Movie Posters by Frank Frazetta What's New Pussycat? (1965) The Secret of My Success (1965) After the Fox (1966) Hotel Paradiso (1966) The Busy Body (1967) Fearless Vampire Killers (1967) Who's Minding The Mint (1967) Yours, Mine and Ours (1968) Mad Monster Party (1969) The Night They Raided Minsky's (1969) Mrs. Pollifax - Spy (1971) Luana (1973) The Gauntlet (1977) Fire and Ice (1983)

george Hull - Krop Creative Database Congrats NB and the folks at Image Engine VFX- & Thanks for asking me to contribute! Take 1 sketches for the deportation hanger on Elysium based on NB notes. I roughed out a quick set and explored compositions. All deportation sketches were done in just one pass then given to VFX to evolve. Wish I'd had time to design +paint properly! Imagining border control like security while giant hoses fuel ships prepping for take off.

From Fairy Tales to Fantasia: The Art of Kay Nielsen by Terri Windling, Endicott Studio for Mythic Arts The period in art history now referred to as the Golden Age of Book Illustration occurred in London at the end of the nineteenth century and in the dawning years of the twentieth century — growing out of the reassessment of Book Arts fostered by the Pre–Raphaelites and the Arts–&–Crafts movement, and aided by advances in printing techniques that made the publication of sumptuously illustrated volumes suddenly economically feasible. As a result, a number of the greatest book illustrators the world has ever known were clustered in London during those years: Walter Crane, Arthur Rackham, Edmund Dulac, Charles and William Heath Robinson, Charles Ricketts, Lawrence Housman, Henry Ford, Jean de Bosschère, and many others — including a young Dane named Kay (pronounced "Kigh") Nielsen, who turned up in the city in 1911 at the tender age of twenty–five with a series of black–and–white drawings inspired by Beardsley under his arm.