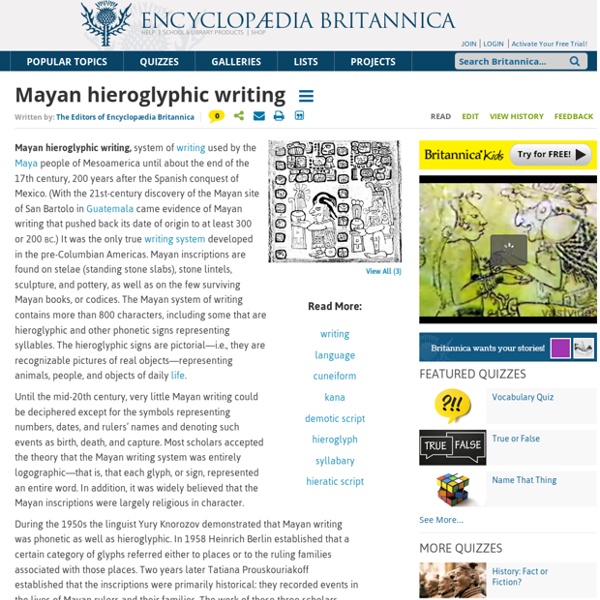 Mayan hieroglyphic writing, system of writing used by the Maya people of Mesoamerica until about the end of the 17th century, 200 years after the Spanish conquest of Mexico. (With the 21st-century discovery of the Mayan site of San Bartolo in Guatemala came evidence of Mayan writing that pushed back its date of origin to at least 300 or 200 bc.) It was the only true writing system developed in the pre-Columbian Americas. Mayan inscriptions are found on stelae (standing stone slabs), stone lintels, sculpture, and pottery, as well as on the few surviving Mayan books, or codices. The Mayan system of writing contains more than 800 characters, including some that are hieroglyphic and other phonetic signs representing syllables. The hieroglyphic signs are pictorial—i.e., they are recognizable pictures of real objects—representing animals, people, and objects of daily life. During the 1950s the linguist Yury Knorozov demonstrated that Mayan writing was phonetic as well as hieroglyphic.

Unearthing the Mayan Creation Myth Archaeologists who have uncovered two massive carved stucco panels in the Mirador Basin of Gua­temala’s northern rain forest say they are the earliest known representation of the Mayan creation myth, predating other such artifacts by a millennium. According to the researchers, the panels—26 feet long and 20 feet high, with images of monsters, gods, and swimming heroes—date to 300 B.C. They formed the sides of a channel that carried rainwater into a complex system of stepped pools, where it was stored for drinking and agriculture. Idaho State University archaeologist Richard Hansen, who is directing the ongoing excavation, says that the panels’ carved images depict an important scene from the Popol Vuh, a text of the Mayan myth that was first recorded in the 16th century. In the part of the story shown, the Hero Twins swim through the underworld after retrieving the head of their father, the deity Hun Hunahpu.

Maya numerals Maya numerals Numbers above 19[edit] Numbers after 19 were written vertically in powers of twenty. For example, thirty-three would be written as one dot above three dots, which are in turn atop two lines. The first dot represents "one twenty" or "1×20", which is added to three dots and two bars, or thirteen. Other than the bar and dot notation, Maya numerals can be illustrated by face type glyphs or pictures. Addition and subtraction: Adding and subtracting numbers below 20 using Maya numerals is very simple.[2]Addition is performed by combining the numeric symbols at each level: If five or more dots result from the combination, five dots are removed and replaced by a bar. Similarly with subtraction, remove the elements of the subtrahend symbol from the minuend symbol: If there are not enough dots in a minuend position, a bar is replaced by five dots. Zero[edit] In the calendar[edit] Detail showing three columns of glyphs from La Mojarra Stela 1. Notes[edit] References[edit]

HISTORY OF THE MAYA The Maya then and now: from 1500 BC The Maya, occupying the triangle of land framed by the Gulf of Mexico, the Caribbean Sea and the Pacific Ocean, have the longest identifiable history of any American people. Social customs, language and physical characteristics (such as unusually round heads) suggest an unbroken link between the American Indians living in the region today and their predecessors 3500 years ago. Since much of the area is jungle (which preserves monuments for the archaeologists by concealing them from others), their culture is also better known than most. The first American script: 2nd c. Of the various early civilizations of central America, the Maya make the greatest use of writing. Credit for this should possibly go back as far as the Olmecs. The Mayan script is hieroglyphic with some phonetic elements. Thus the priests and the palace officials of early America succeed in preserving writing for their own privileged purposes. The Mayan periods: 1500 BC -1542

History - Ancient History in depth: The Fall of the Mayan Civilisation Intense droughts blamed for Mayan collapse - 13 March 2003 The Mayan civilisation of Central America collapsed following a series of intense droughts, suggests the most detailed climatic study to date. The sophisticated society of the Maya centred on large cities on the Yucatán peninsula, now part of Mexico. Their population peaked at 15 million in the 8th century, but the civilisation largely collapsed during the 9th century for reasons that have remained unclear to this day. Now, researchers studying sediment cores drilled from the Cariaco Basin, off northern Venezuela, have identified three periods of intense drought that occurred at 810, 860 and 910AD. These dates correspond to the three phases of Mayan collapse, the scientists say. Furthermore, the entire 9th century suffered below average rainfall, "so it was a dry period with three intense droughts", says Gerald Haug, from ETH in Zurich, Switzerland, who led the research. Experts on the Maya have greeted the new data cautiously. Wet and dry Latest and greatest More From New Scientist

History for Kids: Aztecs, Maya, and Inca Back to History The three most dominant and advanced civilizations that developed in the Americas prior to the arrival of the Europeans were the Aztecs, the Maya, and the Inca. Map of Aztec, Mayan, and Incan Civilizations by Ducksters Aztecs The Aztec Empire was located in central Mexico. The capital city of the Aztec Empire was Tenochtitlan. The Aztec called their ruler the Tlatoani. Maya The Maya civilization began as early as 2000 BC and continued to have a strong presence in Mesoamerica for over 3000 years until the Spanish arrived in 1519 AD. The Maya were located in Central America in a region that is today made up of southern Mexico, the Yucatan Peninsula, Guatemala, Belize, and northern El Salvador. The Maya were the only American civilization to develop an advanced written language. Inca The Inca Empire was centered in Peru and ruled over much of the west coast of South America from the 1400s to the time of the Spanish arrival in 1532. ActivitiesCrossword PuzzleWord Search

Mayan Family The five subfamilies of Mayan languages are: There are numerous ruins of the ancient Mayan civilization in the states of Chiapas and Yucatan, as well as in Guatemala. These archeological sites and the artifacts discovered in them display a highly developed aesthetic sense—in stone sculpture, ceramic work, the casting of precious metals, mosaics, and the carving of crystal and jade—all of these produced without metal tools. The Mayas had invented the abstract symbol of zero to simplify mathematics long before it was in use in Europe, and the Mayan calendar was older and more efficient than the Julian calendar that was in use by the Spaniards who conquered Mexico. In the 1950s one could distinguish what area people came from by the distinctive clothing of both men and women. Typical Mayan diet consists of corn (maize), beans and squash. Many of the languages in this family tend to have long, complex words containing many prefixes and suffixes. For more information Ch'ol-Tzotzil subfamily

Mayan Numbers" Along with their calendars -- the Tzolk'in, the Haab and the Long Count -- the Mayans also created their own math system. They used a series of dots and bars to signify numbers. One dot equaled one unit, while one bar equaled five units. A shell symbol signified zero. In a system similar to the one we use now, the Mayans used place values to designate large numbers. However, the similarities between math systems end there. Mayans' place values are vertical, whereas ours are horizontal. Numbers held great significance in the Mayan culture. Climate Change Killed off Maya Civilization, Study Says The drought theory is still controversial among some archeologists who believe a combination of overpopulation, an internecine struggle for control among the nobles, a weak economic base, and a political system that didn't foster power-sharing led to the Maya's collapse. One hypothesis suggests the Maya people themselves were responsible for their downfall as a result of environmental degradation, including deforestation. Defenders of the climate change theory, however, say the droughts sparked a chain of events that led to the demise of the Maya. "Sunny days, in and of themselves, don't kill people," said Richardson B. Gill, author of The Great Maya Droughts: Water, Life, and Death. "But when people run out of food and water, they die." Living on the Edge In their twilight days, the Maya were a society in deep trouble, according to the authors of the new study. Learning from the Past Other human societies have succumbed to climate swings.

Mayan Civilization City of Copan, Honduras Copán, called Xukpi by its residents, rises out of the mist of western Honduras, in a pocket of alluvial soil amid rugged topography. It is arguably one of the most important royal sites of the Maya civilization. Occupied between AD 400 and 800, Copán covers over 50 acres of temples, altars, stelae, ball courts, several plazas and the magnificent Hieroglyphic Stairway. The culture of Copán was rich in written documentation, today including detailed sculptural inscriptions, which is very rare in precolumbian sites. Explorers of Copán The reason we know so much of the inhabitants of the site of Copán is the result of five hundred years of exploration and study, beginning with Diego García de Palacio who visited the site in 1576. Stephens was a 30-year-old attorney and politician when a doctor suggested he take some time off to rest his voice from speech making. Translating Copan Daily Life at Copan Copán and the Maya Collapse Sources