14 Expressions with Crazy Origins that You Would Never Have Guessed 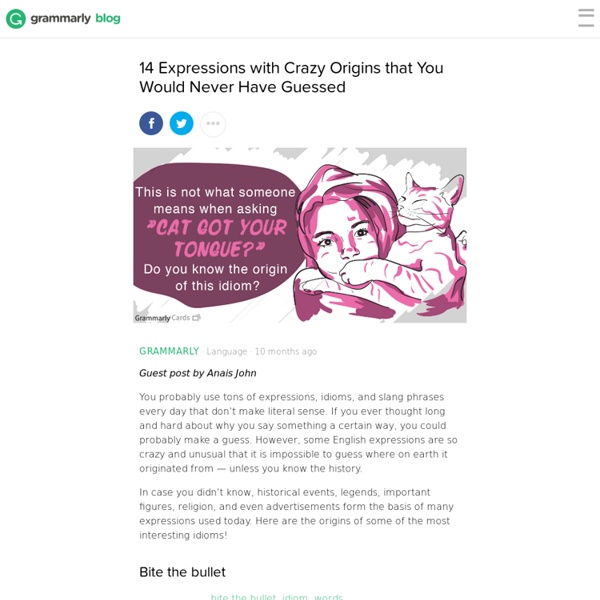 Guest post by Anais John You probably use tons of expressions, idioms, and slang phrases every day that don’t make literal sense. If you ever thought long and hard about why you say something a certain way, you could probably make a guess. However, some English expressions are so crazy and unusual that it is impossible to guess where on earth it originated from — unless you know the history. In case you didn’t know, historical events, legends, important figures, religion, and even advertisements form the basis of many expressions used today. Here are the origins of some of the most interesting idioms! Bite the bullet Meaning: To accept something difficult or unpleasant Origin: In the olden days, when doctors were short on anesthesia or time during a battle, they would ask the patient to bite down on a bullet to distract from the pain. Break the ice Meaning: To break off a conflict or commence a friendship. Butter someone up Meaning: To impress someone with flattery Mad as a hatter

Stand Still. Stay Silent - webcomic, page 1 Page 1 1 Nov. 2013 Yessss! It has begun! With a rather non-postapocalyptic cover for the prologue of a postapocalyptic tale. On Monday I'll post a few pages at once, either three or four depending on where I feel is the best spot to cut the scene. Oof, I still have to fix some things with the first pages before that, most notably he font I'm using.

Earthquakes - Q-files Encyclopedia Many earthquakes take place where one tectonic plate slides down beneath in another in what is called a subduction zone. Shock waves are sent out in all directions when, deep under the ground, the locked plates suddenly "give". A subduction zone 25 maps that explain the English language by Libby Nelson on March 3, 2015 English is the language of Shakespeare and the language of Chaucer. It's spoken in dozens of countries around the world, from the United States to a tiny island named Tristan da Cunha. It reflects the influences of centuries of international exchange, including conquest and colonization, from the Vikings through the 21st century.

The 50 most important English proverbs What are proverbs? Every culture has a collection of wise sayings that offer advice about how to live your life. These sayings are called "proverbs". How can you use proverbs to learn English? It's good to know the really common English proverbs because you hear them come up in conversation all the time. Sometimes people say the entire proverb to give advice to a friend.

WebEnglish.se Related Topics: United Nations’ Day, Malala Yousafzai, Racism, Tolerance, Martin Luther King Jr. Background Human Rights Day December 10th Official WebsiteThe Universal Declaration of Human Rights Infographic poster.The 30 Articles of the Universal Declaration of Human Rights on a poster, in a video and on paper.What are Human Rights Disregarding the origin of this .pdf-booklet, it does present the 30 human rights truly and clearly. Warm-up Human Rights Video: UNITED Song Disregarding the origin of this video, it does convey a message.The History of Human Rights A 10-min video with 9 core questions. Vocabulary Lessons 8b 2012 - engelska Here are the lessons for class 8b 2012 (The lessons will be published as soon as possible after the actual lesson has been carried out) Spring 2012: If you want to practice more at "My secret land"?

Online "… so we repaired to a publick-house, took a friendly glass, and thus parted." — Peter Drake, Amiable Renegade: The Memoirs of Captain Peter Drake, 1671–1753, 1960 "… Warren repaired to the dining alcove off the kitchen … and ate dinner with Nina and the children, discussing their schoolwork and events of the day." — Kevin Starr, Embattled Dreams, 2002 We are all familiar with the verb repair used as a synonym of fix. But today's word, while it is a homograph and a homophone of the more familiar repair, is a slightly older and unrelated verb.

ESL English Listening & Adult Literacy - News - Audiobooks - Songs - Radio Dramas The Tunnel Under The World by Frederik Pohl Guy Burckhardt wakes up screaming, but can't remember the nightmare that caused his fright. Slowly over the next couple of days he comes to realize he's been reliving the same day over and over. And things only get stranger and more frightening from there. One of the true classics of science fiction. This famous Pohl story explores cybernetic robots and implanted personalities.

Word Sense - See the Connections Between Words Word Sense is a neat little service that is one part dictionary and one part thesaurus. When you enter a word into Word Sense it will show you the definition(s) for the word as well as the connections to associated and similar words. You can see any of the definitions of the connected words by simply clicking on them to pop-up a definition.