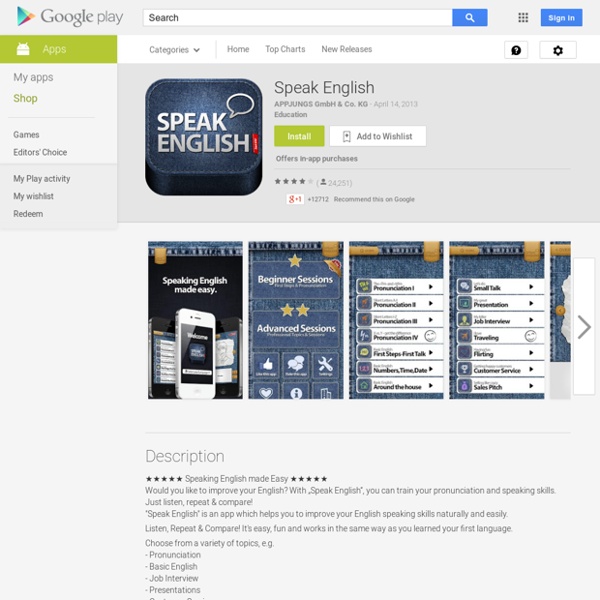 FunEasyLearn is the easy and fun new way to learn English - whether you like listening music from other countries, travelling abroad, working for an international company, or chatting with foreign friends. Our app encourages your kids to learn speaking English quickly. Get the FREE vocabulary app right now! Fun* Select from 7 fun games to learn in a uniquely entertaining manner.* Built-in "Spin Categories" feature allows the app to choose a random topic, subtopic and game for you to enhance your learning experience.* "Review Manager" allows you to review all the words you've learned during each game. Easy* No internet connection is required to use the app.* 3 difficulty levels: beginner, intermediate and advanced.* Choose your preferred tuition language from 51 pre-programmed interface languages: English, German, French, Turkish, Russian, Korean, Arabic, Thai, Japanese, Italian, Spanish, etc. Learn English app is absolutely FREE!

How to fake a British or American Accent English is sometimes a state of confusion for many learners with the large variety of accents, regional slang, and dialects to chose from. Do you speak more American or British or a little bit of both? Which of the major types of English do you find easier to understand, sounds nicer to you, and more difficult to understand? Facts about English: ESL Conversation www.EFLSensei.com While teaching in Japan and China, I saw the need for students to improve their communication skills. Jump to ESL Conversation Topics They desperately needed to work on conversation strategies, build confidence when speaking, and prepare for speaking English outside of the classroom. Simple ESL conversation strategies are sometimes unknown to the students.

Finally, a language-learning app that works Lingua.ly, which just raised $1 million in funding, helps you read foreign-language texts that would otherwise be daunting Have you ever tried to teach yourself the language of a country you don’t live in? It requires a lot of self-discipline and stick-to-it-ness. You would love to be fluent, but the steps along the way – say, mastering the conjugation of hundreds of German verbs – can be a real slog when there’s no immediate pay-off. A few years ago, Orly Fuhrman was trying to teach herself Spanish the way most of us do: by reading articles online and looking them up in a dictionary. Suddenly, an idea occurred to her: What if there were an app that did all the work for you?

Free online voice recorder - SpeakPipe Microphone access error You have denied access to your microphone. Allow access to your microphone Click "Share Selected Device" in the Firefox permission dialog. A podcast about life as a teenager in Sweden We will work with podcasts the last weeks. We are going to follow a Syrian family in this podcast. I will give you questions to discuss. You are also going to produce your own podcasts and reflect on your own lives in Sweden. English Pronunciation We use Cisco wireless in all our buildings for convenient and immediate online access. You will need the following for the files below: English Pronunciation/Listening We use the popular Can8 VirtuaLab for all our digital language lab programs.

Acapela Box : create your text to speech messages 1. Your Acceptance of Terms Welcome to the Acapela-Box Website. 6 Apps For Learning Languages, Ranked By How You Like To Study Almost 1 in 5 Americans speak a language other than English at home — but the thirst for a second, or third, language is still a huge one. And why not? Being bilingual will help your career and be awesome for your neurons: learning a new language, according to a 2014 study, is "built-in exercise" for the brain, keeping it active and improving mental function. "ESL English as a Second Language Listening and Reading Audiobooks" Arch of Triumph by Erich Maria Remarque It is 1939. Despite a law banning him from performing surgery, Ravic —a German doctor and refugee living in Paris— has been treating some of the city’s most elite citizens. Forbidden to return to his own country, and dodging the everyday dangers of jail and deportation, Ravic manages to hang on —all the while searching for the Nazi who tortured him back in Germany.

Reported speech and creative writing: Fifty ways  – On the same page After reading the reported conversation and discussing what it is about, the students practise simple reported speech structures by rewriting each line into direct speech while changing tenses, pronouns, possessive adjectives and time references when necessary. With the aid of a few extra words provided, the result will be the actual lyrics from “Fifty Ways to Leave Your Lover” by Paul Simon. The students listen to the song and check their answers at the end. The class can then work together and write a few more “ways to leave your lover”, following the model in the chorus. The students first choose one of the one-syllable proper names in the circle and match it with any words that rhyme in the box on the right. They then write their own lines, such as “Go to the gym, Tim”, “Don’t pull my leg, Meg”, “Get on that van, Dan”, or “Let’s make a deal, Neil”.

proficiency One way to introduce a new vocab set This is a different way to introduce a new vocab set to introduce to your students. I learnt it from my tutor on my CELTA course. I used it recently with my 11-year-olds and it worked really well. I think it would work with older students and higher levels too. They get a chance to […] Natural Reader 7 Review I remember, a while ago I admit, the first time I heard computer generated speech. I think it was an early version of the text to speech generator which everyone immediately associates with Professor Stephen Hawking, the guy who invented time. Though it was novel at the time, unless you were in dire need of something which could communicate verbally on your behalf, the practical applications were somewhat limited. Thankfully, things have progressed somewhat, and with the increased power today, it’s now possible to use computers to communicate the spoken word in more, natural tones, and Natural Reader 7 is a text-to-speech program, which attempts to do exactly that. The program interface consists of a main window into which text can be pasted and spoken by the program.