How to Grow Stevia and Make Homemade Stevia Extract 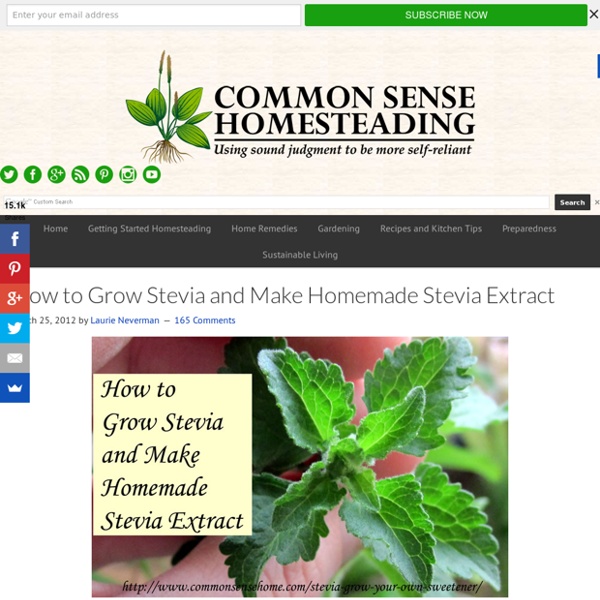 HOW TO GROW A PINEAPPLE FROM SEED |The Garden of Eaden The pineapple fruit - Ananas comosus, is a common sight in most supermarket fresh produce aisles, but as familiar as it is today the pineapple is steeped in history and was once considered to be the most coveted of all fruit. Discovered in 1493 by Christopher Columbus during his voyages to the Americas, the pineapple became an instant hit when it was introduced to Europe. Unfortunately the pineapple has a notoriously short shelf life and the 1-2 month sea voyage it made obtaining one was almost impossible. Its extreme rarity meant that the pineapple quickly became a symbol of wealth and luxury, but despite the best efforts of European gardeners it was almost two centuries before they were able to mimic the conditions required to bring a pineapple plant to fruition. In order to get your hands on some seed cut a fresh and fully ripe pineapple into slices and remove the small, black seeds in the fruit's flesh. Place the seeds into a clear, plastic bag with a sheet of damp kitchen towel.

20 Uses for Garlic : EcoSalon Pungent and powerful, garlic has dozens of health and household uses. Chew up a raw clove of garlic and you might exhale noxious, eye-watering clouds of stink all day, but you’ll also repel mosquitoes (and vampires), increase your immunity, heal cold sores, expel parasites and maybe even get in the mood. Garlic is a broad-spectrum antibiotic, killing bacteria, fungus, viruses and mold, so it’s an important ally for natural health. Check out these 20 unusual and sometimes strange alternative uses for garlic.Acne Slice open a clove of raw, fresh garlic and apply it to breakouts as a home remedy for acne. Your skin won’t smell terribly good, but the antibacterial properties of garlic will help lessen the appearance of acne, even those deep acne cysts that can otherwise be difficult to treat. Pesticide Whiteflies, aphids, cabbage loopers and squash bugs. Cold sore treatment These unsightly lesions always seem to pop up at the most inopportune times, like the morning before a big date. Fish bait

Foraging for Wild Food: 6 Sustainable Techniques Let's say you’re hiking up the trail with sweat dripping down your face and a sunburn on your neck, and all that your stomach wants is some nourishment to keep you going strong. But where to find it? You left your snacks at home. Do you dare forage for edible plant life on your own? Arthur Haines, a research botanist and plant taxonomist with the Delta Institute of Natural History in Maine, says that foraging for wild foods can actually be beneficial for both plants and people — so long as it is done properly. "Usually, the very first thing that people think is that foraging damages plant populations," said Haines in a recent phone call. Haines gave us some tips on how to gather wild foods responsibly the next time you’re outside and in a pinch. 1. More is not always better. "It’s not considered lethal collection when we talk about perennials and we harvest the top part," Haines says. 2. Also important concerning what sections you forage for is when you forage for them, Haines says. 3. 4.

GRAVIOLA AND CANCER ~ Graviola fights cancer The National Cancer Institute first noted the anticancer activity of graviola leaves in 1976, in an internal study not publicly released. Much of the subsequent research has been conducted at Purdue University in Indiana [source: Bluestein]. The studies concentrate on the antitumor properties and selective toxicity of annonaceous acetogenins. In 1997, the Purdue team announced that these phytochemicals, in studies, appeared especially effective at destroying cells that had survived chemotherapy. Such cells can develop resistance to several anti-cancer agents, earning the name multi-drug resistant (MDR). Typically, less than two percent of cancer cells have MDR properties, but this small set can quickly multiply after initial chemotherapy, rendering subsequent rounds of chemo useless. These research findings have generated tremendous excitement, as well as an effort to market graviola supplements. More from Graviola Secret

101 Gardening Secrets The Experts Never Tell You I like to use natural top soil to start my garden seedlings in. I usually don't use potting soil because it generally does not produce the results I want. I usually fill a large, deep baking pan I have with top soil and bake it for thirty minutes at 350 degrees. This sanitizes the soil and makes sure that no weeds or grass come up in your soil. I usually start on this project in the winter and I fill up a couple of large plastic barrels with lids with the sanitized soil. I fill my trays up with my potting soil and then I plant my seeds. I cover each seedling with a clear plastic cup that I wash and reuse. If you want to root a plant or cutting in water, add a aspirin or two to the water. If you plant your seeds outdoors sprinkle flavored powdered gelatin in the soil with the seeds. Transplanting Tomatoes Or Pepper Plants When planting any type of tomato or pepper plant, pinch off all but the top leaves of the plant. Then carefully fill the hole with dirt and pack the dirt down tight. 1.

What Consuming Just One Ounce of Coconut Oil Per Day Does To Your Body Over A Period Of Time by Eddie Coconut oil is one of the few foods that can actually be classified as a super food. There is such a hype surrounding the product that it really makes you wonder what the sudden ubiquitous of this tropical plant is all about. It contains a unique combination of fatty acids with powerful medicinal properties Coconut oil contains what is known as medium chain fatty triglycerides, which are fatty acids of a medium length. Places that eat coconut oil are considered to be the healthiest on the planet Coconut oil is still considered to be an exotic food in our Western Society, primarily consumed by health conscious people. Helps to control weight One 2009 Study looked at the weight loss link between consumption of coconut oil and found that it reduced abdominal obesity. Good Source of Lauric Acid The lauric acid in coconut oil can kill bacteria, viruses, fungi, and help stave off infections. They can reduce seizures Ease Digestion Helps to Manage Type 2 Diabetes Cooks at high temperatures

Turmeric Extract Puts Drugs For Knee Osteoarthritis To Shame Millions take non-steroidal anti-inflammatory drugs (NSAIDs) daily for arthritis and related inflammatory conditions, but are completely unaware that far safer, and at least as effective, natural alternatives already exist -- and are as easily accessible and inexpensive as the spices found in your kitchen cupboard. Human research on the health benefits of turmeric is sparse, mainly due to the lack of capital available to fund expensive clinical trials. [i] Despite many decades of investigation as a lead drug compound, and the availability of thousands of preclinical studies indicating turmeric's therapeutic value , few yet realize that this common kitchen spice may provide a suitable drug alternative for common health conditions. Researchers compared the effect of a curcuminoid extract to the NSAID drug diclofenac sodium in reducing cycloxygenase -2 (COX-2) secretion by synovial fluid's monocytes in two, randomly divided, groups suffering with knee osteoarthritis.