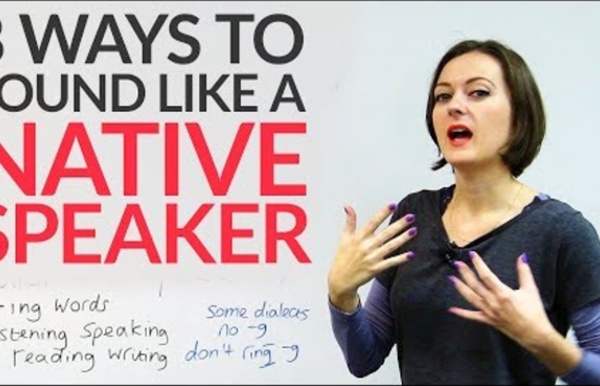 How to Improve Your English Pronunciation to Talk Like a Native “What?” “Can you say that again?” How many times do you hear this when you’re speaking? Even if your vocabulary and English grammar are perfect, it can still be difficult for people to understand you because of your pronunciation. Learning to pronounce English words correctly can be one of the hardest parts of learning English. The English language has some sounds that your native language might not, so you will have to learn how to make completely new sounds. 33 ways to speak better English If you’re reading this, I imagine you want to speak better English and communicate in a more confident and competent way. When we communicate effectively we are able to express our ideas and opinions, share experiences, and build relationships with others. When we struggle to express ourselves, we feel unvalued and insecure. As human beings, we want to participate in group discussions and have an impact on the society around us. In the modern world, we communicate across borders. English is the closest thing we have to an international language.

18 English words that mean very different things in Britain and America As the old adage famously goes: you say tom-MAY-toes, and I say tom-MAH-toes. We should probably call the whole thing off, right? Ever since the might of the British Empire was expelled from the United States, ordinary folk from both sides of the pond have chuckled at each other's use of the English language and pronunciation. Pronunciation skills: What accent should I teach? By Adrian Underhill ELT Pronunciation expert Adrian Underhill addresses your practical concerns on accents, RP and student identity. Practical concerns The most difficult words to pronounce in the English language revealed – as well as the world’s favourite English tongue-twisters “Worcestershire”. “Choir”. “Sixth”. For some, these words may seem relatively normal and everyday – but to others, they represent an unrivalled linguistic challenge. For almost two weeks, users of the online social platform reddit have been submitting what they consider to be “the hardest English word to pronounce”.

Intonation – Simple Conversation in Different Voices – The Canswedian English Teacher Right now, I am enrolled in an English Grammar course at a Swedish university. Teacher’s license in Sweden = more English. Go figure… Teaching Diphthongs It’s never easy to teach phonetics and even though I love teaching this skill, I don’t think my students share my feelings on this subject. Anyway,in case you find it interesting or useful this is how I’m planning to teach diphthongs . A diphthong is a sound made up of two vowels, or in other words ,a vowel sound that starts near the articulatory position for one vowel and moves toward the position for another.In RP (the approved pronunciation of British English) , there are eight diphthongs. An easy way for them to remember the diphthongs is by drawing a face such as this one and then eliciting the diphthongs in the head. You’ll get seven out of the eight diphthongs as you can see from the picture . To get the last sound you can always ask students :” Which Diphthong is missing ?”

You've Been Saying These Country And City Names Wrong Your Whole Life No one wants to be labeled as a gawking, uninformed foreigner. Aside from wearing a fanny pack, one of the fastest ways to get yourself labeled as a tourist is to mispronounce the name of the city you are visiting. However, in defense of all those who confuse the proper pronunciation of Ibiza for a seriously strong lisp, learning the proper names of all the places in the world can be a tricky task. Let’s face it, spelling can be deceiving, especially if it’s in a language you don’t know how to speak. But luckily, Thrillophilia set out to find the most tricky cities and put an end to their mispronunciations once and for all.

Ceri Jones - Pronunciation: focusing on sounds from day one For the last couple of years I’ve been teaching the Unknown Language component of the Trinity TESOL certificate course. This basically entails teaching four hours of a new language to the trainees in the initial stage of their course to give them a taste of what it feels like to be in a language classroom. I teach Welsh. I don’t use any published materials for the class. Royals (Lorde) –[Multimedia-English videos] This was named the Best Song of 2013 by MTV News. MTV said: "She may never be 'royal,' but Lorde's chart-topping single will forever be enthroned in the collective cerebral cortex of the world." Ella Yelich-O'Connor is a New Zealand singer-songwriter.

Sandy Millin: Advanced pronunciation I have regularly taught advanced students who are extremely competent speakers, have a very wide vocabulary and a good knowledge of grammatical structures, but who have trouble understanding when native speakers produce fast speech. This was a particular problem when I was teaching in the UK, where some of my students were reluctant to speak to people in the streets when we did tasks such as interviews, as they were worried they wouldn’t understand and would have to keep asking for their interviewee to repeat themselves. To combat this fear and to improve students’ confidence, I think it’s important to focus on the features of connected speech with our students as early as possible.