10 Types of Odd Friendships You're Probably Part Of 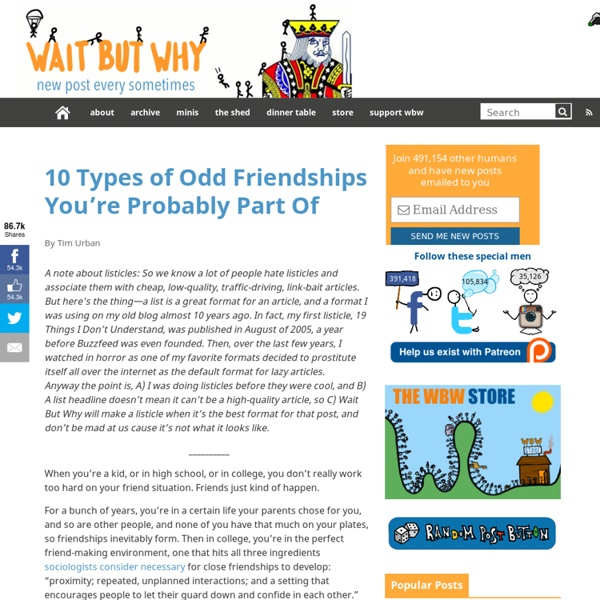 A note about listicles: So we know a lot of people hate listicles and associate them with cheap, low-quality, traffic-driving, link-bait articles. But here’s the thing—a list is a great format for an article, and a format I was using on my old blog almost 10 years ago. In fact, my first listicle, 19 Things I Don’t Understand, was published in August of 2005, a year before Buzzfeed was even founded. Then, over the last few years, I watched in horror as one of my favorite formats decided to prostitute itself all over the internet as the default format for lazy articles. Anyway the point is, A) I was doing listicles before they were cool, and B) A list headline doesn’t mean it can’t be a high-quality article, so C) Wait But Why will make a listicle when it’s the best format for that post, and don’t be mad at us cause it’s not what it looks like. When you’re a kid, or in high school, or in college, you don’t really work too hard on your friend situation. 1) The Non-Question-Asking Friend

Related:  Tabs • you can relate

√ Lonely Lyle Lyrics Poor Lyle He lives in an hourglass Counting every grain he sees Nothing but time Always the sun Kiss of a thirst felt with his teeth But he still has his arms He still has his legs Nowhere to walk to And nothing to hold After a panic Gathered his wizard bow (?) Elon Musk Food Challenge I plowed through 14 bags of pasta in 31 days.Kathleen Elkins/Business Insider When Elon Musk was 17, he lived off a dollar a day for a month to see if he had what it takes to be an entrepreneur. He explained the experiment to astrophysicist Neil deGrasse Tyson in an episode of Tyson's StarTalk Radio podcast:

Russia: Stray Dogs Master Complex Moscow Subway System Every so often, if you ride Moscow's crowded subways, you notice that the commuters around you include a dog - a stray dog, on its own, just using the handy underground Metro to beat the traffic and get from A to B. Yes, some of Moscow's stray dogs have figured out how to use the city's immense and complex subway system, getting on and off at their regular stops. The human commuters around them are so accustomed to it that they rarely seem to notice. "In Moscow there are all sorts of stray dogs, but... there are no stupid dogs," Dr. Andrey Poyarkov, a biologist who has studied Moscow's strays for 30 years, told ABC News. As many as 35,000 stray dogs live in Russia's capital city.

Stop Being a Butthole Wife Stop being a butthole wife. No, I’m serious. End it. 'And Vinyly' make vinyl records from cremation ASHES 'And Vinyly' mixes cremated ashes into vinyl from £250The idea was developed by music producer Jason Leach who as inspired by an American who put his ashes into fireworks By Daniel Bates Published: 15:36 GMT, 30 July 2013 | Updated: 15:46 GMT, 30 July 2013 A vinyl pressing service is mixing the ashes of dead people into records to create a somewhat macabre memento. A UK company called (somewhat appropriately) And Vinyly put the cremated body parts into raw vinyl that is used to make the discs and turns them into a macabre memento of a person’s life. Basic packages cost £2,000 for up to 30 discs - far less than the cremation or traditional burial.

5 Habits That Will Get You 30% More Productive · Roxann Roeder's Hub Welcome To My Blog! If You're Struggling To Generate Leads & Sign-Ups in Your Business... CLICK HERE TO WATCH MY FREE TRAINING. Thanks For Visiting & Please Come Back Again! - Roxann Roeder Shows & Bruce ​​​Denver Fly Fishing Show ​Denver Mart 451 E 58th Ave Denver CO ​January 6th, 7th & 8th 2016 Pleasanton Fly Fishing Show Garner State Park — Texas Parks & Wildlife Department Families enjoy swimming, dancing and hiking Fun traditions and beautiful scenery bring people back to Garner State Park time after time. Besides easy access to the Frio, the park offers many miles of hiking trails and camping options. Things to Do Legend Award Kleber C. Miller Shannon, Gracey, Ratliff & Miller Most people his age don’t get up each morning, dress in a suit and tie and head to the office. But Kleber C. Miller isn’t a typical 91-year-old. “I’m fortunate that I love what I do and that I’ve enjoyed it my entire life,” said Miller, senior counsel and founding partner at Shannon, Gracey, Ratliff & Miller law firm.

Heyday Books turns 40 with a real page-turner on Malcolm Margolin - SFGate Begin Slideshow 3 Photo: Carlos Avila Gonzalez, The Chronicle Heyday Books founder Malcolm Margolin is the subject of a new book to celebrate the publishing house's 40th anniversary. Under Margolin, Heyday Books has published 350 titles, with an emphasis on stories about California. Malcolm Margolin looks over some books at Heyday Books in Berkeley, Calif., on Monday, August 25, 2014. Heyday became a-non profit several years ago and it is flourishing.