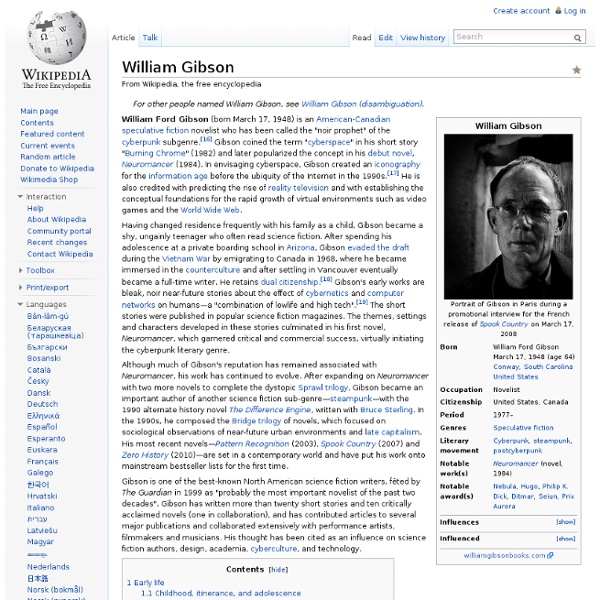 William Ford Gibson (born March 17, 1948) is an American-Canadian speculative fiction novelist who has been called the "noir prophet" of the cyberpunk subgenre.[2] Gibson coined the term "cyberspace" in his short story "Burning Chrome" (1982) and later popularized the concept in his debut novel, Neuromancer (1984). In envisaging cyberspace, Gibson created an iconography for the information age before the ubiquity of the Internet in the 1990s.[3] He is also credited with predicting the rise of reality television and with establishing the conceptual foundations for the rapid growth of virtual environments such as video games and the World Wide Web. Having changed residence frequently with his family as a child, Gibson became a shy, ungainly teenager who often read science fiction. After spending his adolescence at a private boarding school in Arizona, Gibson evaded the draft during the Vietnam War by emigrating to Canada in 1968, where he became immersed in the counterculture.

The Better Angels of Our Nature: The Decline of Violence In History And Its Causes: Amazon.co.uk: Steven Pinker Good news, folks. Violence has been declining. We are getting kinder and gentler as a species. Leigh Brackett Life[edit] Leigh Brackett was born December 7, 1915 in Los Angeles, California and grew up there. On December 31, 1946, at age 31, she married Edmond Hamilton in San Gabriel, California, and moved with him to Kinsman, Ohio. She died of cancer in 1978 in Lancaster, California.[1] Career[edit] Author[edit]

Sprawl trilogy The Sprawl trilogy (also known as the Neuromancer, Cyberspace, or Matrix trilogy) is William Gibson's first set of novels, composed of Neuromancer (1984), Count Zero (1986), and Mona Lisa Overdrive (1988). The novels are all set in the same fictional future, and are subtly interlinked by shared characters and themes (which are not always readily apparent). The Sprawl trilogy shares this setting with Gibson's short stories "Johnny Mnemonic," "New Rose Hotel," and "Burning Chrome," and events and characters from the stories appear in or are mentioned at points in the trilogy.

Re-importing the foreign?: An empirical survey about identity-formulation ... - Michaela Strobel Despite the growing importance of economies outside the ‘western’ hemisphere (Thussu, 2007: 28), the scholarly discourse within media science is still unceasingly revolving around the issue of ‘Western’ hegemony. This is mainly concerning two aspects of media: structures and content. While on the structural (MacBridge Report 1980 (Hafez, 2007: 80)), financial (Thussu, 2007: 27) and institutional (Cottle, 2009: 30) side a dominion of US-American (Vu, 2012), Australian (Hafez, 2007: 173) or European (Hillard, 2009) media corporations is still observable – although translational interlinkages, mergers and complex shareholder-structures make it increasingly hard to detangle (Hafez, 2007: 159) – research on the content-level is starting to look for more democratic models.

Stumbling on Happiness: Amazon.co.uk: Daniel Gilbert ‘“Stumbling on Happiness” is an absolutely fantastic book that will shatter your most deeply held convictions about how your own mind works. Ceaselessly entertaining, Gilbert is the perfect guide to some of the most interesting psychological research ever performed. Think you know what makes you happy? Lucius Shepard Lucius Shepard (August 21, 1943 – March 18, 2014) was an American writer. Classified as a science fiction and fantasy writer, he often leaned into other genres, such as magical realism. His work is infused with a political and historical sensibility and an awareness of literary antecedents. Career[edit]

Bridge trilogy Setting[edit] The first book of the Bridge trilogy is set in an imaginary 2006, with the subsequent books set a few years later.[1] The books deal with the race to control the beginnings of cyberspace technology and are set on the United States' West coast in a post-earthquake California (divided into the separate states of NoCal and SoCal), as well as a post-earthquake Tokyo, Japan, that had been rebuilt using nanotechnology. The trilogy derives its name from the San Francisco – Oakland Bay Bridge, which was abandoned in an earthquake and has become a massive shantytown and a site of improvised shelter. The bridge becomes a pivotal location in Virtual Light and All Tomorrow's Parties. The 'bridge' may also be interpreted as a metaphor for the nascent technologies bridging contemporaneous life and the highly advanced future depicted in the Sprawl trilogy, where cyberspace and nanotechnology are fully developed and commonplace.[citation needed]

Underground, Haruki Murakami Alfred Birnbaum (Translated ) - Shop Online for Books in Australia The Tokyo Gas Attack and the Japanese Psyche By Haruki Murakami, Alfred Birnbaum (Translated by), Philip Gabriel (Translated by) Free Shipping Worldwide Ships from UK supplier Anarchy, State and Utopia: Amazon.co.uk: Robert Nozick This is NOT light reading. Then again, it's a philosophy book, and nobody obliged me to read it. I kept reminding myself of this every time I had to re-read a paragraph for the third time before giving up on understanding it. So there you have it, I fully admit that whole sections of this book went over my head. But I'm glad I read it.

A. E. van Vogt Alfred Elton van Vogt (/vænvoʊt/; April 26, 1912 – January 26, 2000) was a Canadian-born science fiction author regarded as one of the most popular and complex[1] science fiction writers of the mid-twentieth century: the "Golden Age" of the genre. Early life and writings[edit] Van Vogt was born on a farm in Edenburg, a Russian Mennonite community east of Gretna, Manitoba, Canada. Until he was four years old, van Vogt and his family spoke only a dialect of Low German in the home.[2] Van Vogt's father, a lawyer, moved his family several times and his son found these moves difficult, remarking in later life: