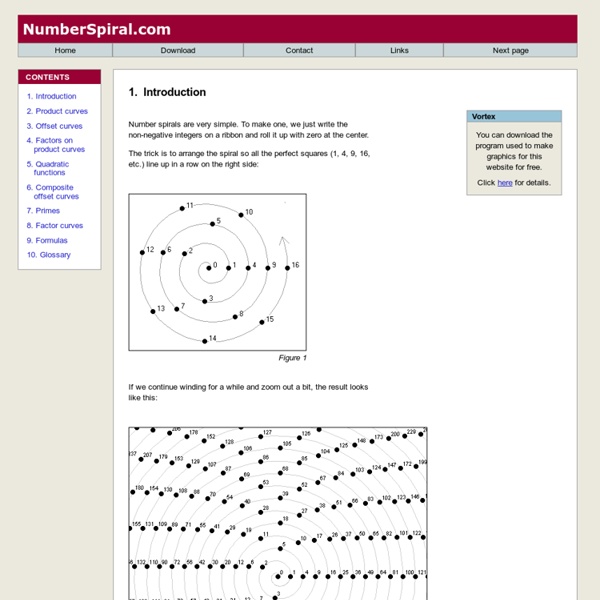 New Pattern Found in Prime Numbers (PhysOrg.com) -- Prime numbers have intrigued curious thinkers for centuries. On one hand, prime numbers seem to be randomly distributed among the natural numbers with no other law than that of chance. But on the other hand, the global distribution of primes reveals a remarkably smooth regularity. Contents, Interactive Mathematics Miscellany and Puzzles Since May 6, 1997You are visitor number E66B7E in base 20 Raymond Smullyan, a Mathematician, Philosopher and author of several outstanding books of logical puzzles, tells, in one of his books, a revealing story. A friend invited him for dinner. He told Smullyan that his teenage son was crazy about Smullyan's books and could not wait to meet him.

Vi Hart: Math Doodling Remember that video about doodling dragons and fractals and stuff? I finally finished part 2! Here is a magnet link so you can dowload it via torrent. Here it is on YouTube: 15-Pound, Retro-Tech Flywheel Helps You Pedal Your Bike To Tomorrow The technology of a flywheel is simple and old: Use energy to spin up a wheel very quickly. Later, you can take that spinning energy and use it for something else. But you normally think of flywheels as enormous steel monstrosities spinning in factories. But 22-year-old inventor Maxwell von Stein's new bike employs a small flywheel to boost his speed and take a load off his legs while pedaling: When braking, the biker simply shifts gears and allows the energy to transfer from the back wheel to the flywheel (instead of transferring uselessly to the brake pads).

Finding Unity in the Math Wars I usually avoid current events, but recent skirmishes in the math world prompted me to chime in. To recap, there’ve been heated discussions about math education and the role of online resources like Khan Academy. As fun as a good math showdown may appear, there’s a bigger threat: Apathy. And Justin Bieber. Educators, online or not, don’t compete with each other. Roman Numerals The Romans were active in trade and commerce, and from the time of learning to write they needed a way to indicate numbers. The system they developed lasted many centuries, and still sees some specialized use today. Roman numerals traditionally indicate the order of rulers or ships who share the same name (i.e. Queen Elizabeth II). They are also sometimes still used in the publishing industry for copyright dates, and on cornerstones and gravestones when the owner of a building or the family of the deceased wishes to create an impression of classical dignity. The Roman numbering system also lives on in our languages, which still use Latin word roots to express numerical ideas.

An Introduction to Neural Networks Prof. Leslie Smith Centre for Cognitive and Computational Neuroscience Department of Computing and Mathematics University of Stirling. lss@cs.stir.ac.uk last major update: 25 October 1996: minor update 22 April 1998 and 12 Sept 2001: links updated (they were out of date) 12 Sept 2001; fix to math font (thanks Sietse Brouwer) 2 April 2003 This document is a roughly HTML-ised version of a talk given at the NSYN meeting in Edinburgh, Scotland, on 28 February 1996, then updated a few times in response to comments received. Please email me comments, but remember that this was originally just the slides from an introductory talk! Why would anyone want a `new' sort of computer?