12 Pieces Of Buddhist Wisdom That Will Transform Your Life 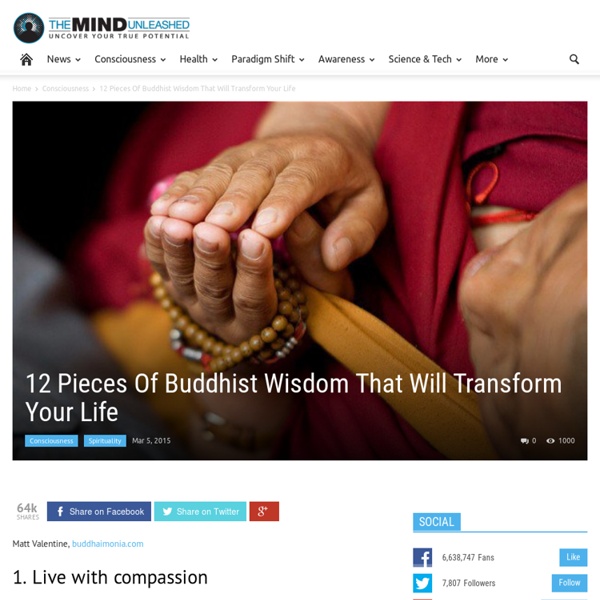 Matt Valentine, buddhaimonia.com 1. Live with compassion Compassion is one of the most revered qualities in Buddhism and great compassion is a sign of a highly realized human being. Compassion doesn’t just help the world at large, and it isn’t just about the fact that it’s the right thing to do. Compassion, and seeking to understand those around you, can transform your life for a number of reasons. First, self-compassion is altogether critical towards finding peace within yourself. Next, we can often be tortured because of the fact that we don’t completely understand why people do certain things. Compassion is understanding the basic goodness in all people and then seeking to discover that basic goodness in specific people. But even more than that, expressing compassion is the very act of connecting wholeheartedly with others, and simply connecting in this way can be a great source of joy for us. The reasons for practicing compassion are numerous and powerful. 2. 3. 4. Why? 5. 6. 7. 8. 9.

Abby Martin - The Bonobo WayThe Bonobo Way Abby Martin on The Dr. Susan Block Show this Saturday This Saturday, April 18th, 2015, 10:30 pm PST The Dr. Susan Block Show will present a special evening with Abby Martin, the controversial American journalist, an important voice in alternative media, former host of Breaking the Set on RT America network, co-founder of the citizen journalism site, Media Roots and member of the board of directors of the Media Freedom Foundation which manages Project Censored. An avid fan of Abby Martin's paradigm-breaking journalism and passionate peace activism, Dr. Susan Block looks forward to an in-studio interview that is sure to enlighten her audience and make war apologists cringe.

11 Reasons Dehydration Is Making You Sick And Fat Adverse effects from not drinking enough water include digestive, skin, bladder and kidney problems, fatigue, and even headaches. We need water as much as the air we breathe in! Keeping your body hydrated is not a joke. 30 Albert Einstein Quotes That Will Open Your Mind This article was inspired by 2spare.com| Albert Einstein was a theoretical physicist who had a huge impact on science after developing his theory of general relativity and special relativity. After winning the Nobel Prize in 1921, Einstein solidified himself as one of the most influential figures in the history of science. But just as much as he was known for his scientific accomplishments, he was also known for his wisdom, his wit, his insight, and his life philosophies. He well-rounded brilliance has left its mark on humanity, and to this day his quotes are some of the most inspiring, mind-opening, and encouraging of all time. Not to mention, he has a great sense of humour. Here are 30 Albert Einstein quotes that will open your mind and make your day:

How I Taught Brian Rose the Muscle-Up It’s a cold winter Saturday morning and I'm finishing off a workout at Primrose Hill in one of London's finest outdoor exercise areas. Out the corner of my eye I spot the founder of London Real, Mr Brian Rose. Being a fan of the YouTube show, I introduce myself and ask him what he's working on. "The muscle up,” he replies. 10 Everyday Items to Throw Away for Better Health By Dr. Mercola Each and every day, you come into contact with a large number of items—many of which have health risks that can accumulate over time.

The Moral Bucket List Photo ABOUT once a month I run across a person who radiates an inner light. These people can be in any walk of life. They seem deeply good. They listen well. They make you feel funny and valued. 3 Ways to Sleep Like a Silverback Gorilla There is something magical and primal about sleeping under the stars but its not the romantic aspect that we are interested in. The percentage of CO2 in the air of a normal bedroom rises drastically overnight as you count your Zs. It rises high enough that you are effectively poisoning yourself and starving your brain.

This Easy Morning Stretch Will Revitalize Your Body, And Give You A Boost Of Energy! The Sun Salutation: (Surya Namaskara) is a sequence of twelve positions performed in a continuous flow. Each position counteracts the one before, stretching the entire body, while alternately expanding and contracting the chest to regulate the breathing.