Topher White: What can save the rainforest? Your used cell phone 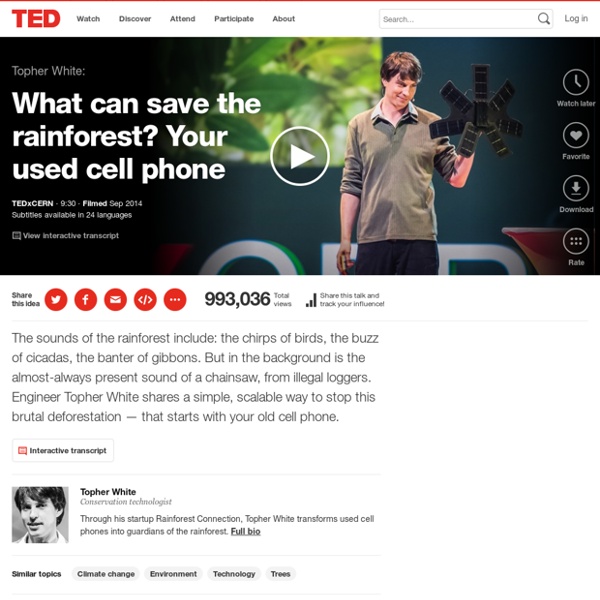 Group Writing: Useful Tips and Tasks - ELT Connect Have you ever introduced a group writing task, only to be met with a yawn from your right, a sigh from your left or a poker-face down the back who you know is thinking, ‘I’m still going to do it on my own properly tonight’? So, why are some students so reluctant to collaborate on writing tasks? Cons: (from a student’s perspective) I don’t see the benefits of group/paired writing tasks and sometimes I feel I’m just listening to and ‘learning’ my partner’s mistakes.I’d prefer to do it on my own; there’s always someone lazy or quiet in the group who contributes very little.I’d rather do it as homework individually where I can focus; the classroom is too noisy when we work in groups.When the teacher corrects it, I won’t be sure of what parts were mine and my partner’s.

News: Rain Forest For centuries, humans have relied on rain forests for a variety of products. Foods such as tomatoes, peppers, corn, rice, coconuts, bananas, coffee, cocoa, tapioca, beans, and sweet potatoes all originally came from the rain forest. Many civilizations have exploited the timber in rain forests and cleared the land for farms. U.S. Religious Knowledge Quiz How much do you know about religion? And how do you compare with the average American? Here’s your chance to find out. Take our short, 15-question quiz, and see how you do in comparison with 3,412 randomly sampled adults who were asked these and other questions in the U.S. Religious Knowledge Survey. This national poll was conducted by the Pew Research Center’s Forum on Religion & Public Life from May 19 through June 6, 2010*, on landlines and cell phones, in English and Spanish.

About Ecological Footprint Right now we consume the equivalent of 1.5 planets' worth of natural resources every year! Did you know that if everyone on the planet lived like the average American, we would need 5 Earths to sustain our lifestyle? Where does that number come from? By determining how many hectares of land humans need to support their lifestyle and comparing it to the amount of arable land found on the planet, scientists are able to measure the impact of human demand on the planet’s eco systems, which is called our ecological footprint. Globally, all humanity consumes the equivalent of 1.5 planets' worth of resources to sustain the way we live each year. This means that it takes the planet one and a half years to replenish everything humans consume in one year.

Why are rainforests being destroyed? Humans are the main cause of rainforest destruction. We are cutting down rainforests for many reasons, including: In 2005 and 2010 the Amazon experienced the worst droughts ever recorded. Rivers dried up, isolating communities, and millions of acres burned. Art is my activism Jenni Laiti is looking out for Sámi interests. Racism, inequality and structural violence have been part of the everyday life of the Sámi people for hundreds of years. The Sámi are Europe’s only indigenous people, located in Norway, Sweden, Finland and Russia, and suffer from being a minority.

Serious game Click on the image to start the game Scenario For more than a century people have been using and depleting energy resources carefree, as if they were endless. In 2020 the world could find itself in a deadlock. Imagine If Every School Played *This* Video Before Class Wisdom comes with age, huh? Don't try telling that to Kid President. The kid's on fire in this insightful and funny pep talk that we can all most definitely take something from. Kid President doesn't claim to know it all, but he does know a few things. This magical button delivers Upworthy stories to you on Facebook: