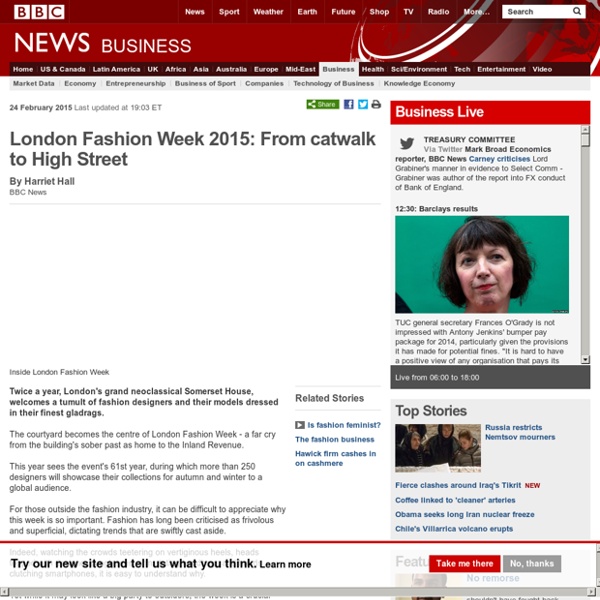 24 February 2015Last updated at 19:03 ET By Harriet Hall BBC News Inside London Fashion Week Twice a year, London's grand neoclassical Somerset House, welcomes a tumult of fashion designers and their models dressed in their finest gladrags. The courtyard becomes the centre of London Fashion Week - a far cry from the building's sober past as home to the Inland Revenue. This year sees the event's 61st year, during which more than 250 designers will showcase their collections for autumn and winter to a global audience. For those outside the fashion industry, it can be difficult to appreciate why this week is so important. Indeed, watching the crowds teetering on vertiginous heels, heads topped with designer sunglasses, arms toting handbags and hands clutching smartphones, it is easy to understand why. Yet while it may look like a big party to outsiders, the week is a crucial one for the industry. Some catwalk fashions may seem outlandish or frivolous.... Trickle-down trends “Start Quote

25 Women Designers Who Changed Fashion Forever The upcoming Costume Institute exhibit and Monday's Met Ball honors two of fashion's most beloved women designers: Elsa Schiaparelli and Miuccia Prada. But what about the other female names that have helped to change fashion forever? Recently, Style.com's Nicole Phelps noted that in New York fashion today there is a surprising lack of big-name female designers, which begged the question: "Is it easier to succeed in New York fashion as a man?" Phelps certainly has a point: After all, in the CFDA/Vogue Fashion Fund's eight year history, the prize has only been awarded to women designers twice.

10 Influential Fashion Designers You’ve Probably Never Heard Of It’s curious to wonder why some designer’s legacies are preserved and others fall to the wayside. Is it the lack of PR, no heir to the design house or were they just bad designers? While certain designers of the past are remembered today for their ingenuity or are attributed with the "invention" of a particular garment, such as Mary Quant and the miniskirt, scores of designers--like Redfern, Lucile or Mainbocher--who were widely influential in their time have seemingly been forgotten. The task of resurrecting these legacies thus falls upon the fashion historian, so sit back for a mini fashion history lesson of 10 fashion designers you've probably never heard of but should definitely know. For more fashion history by Part Nouveau, click here. John Redfern - The Tailor Designer

Body Anxiety and a new wave of digifeminist art Jennifer Chan and Leah Schrager are two names you need to get familiar with. The US-based new media artists have co-curated an all-female line-up of 21 artists – for the currently on show exhibition titled Body Anxiety – who use their own bodies in their works, while pioneering the newest forms of media: from online performance GIF art (see: May Waver and RAFia Santana) to web and digital art – alongside video, poetry and photography. The virtual exhibit demonstrates the plurality of views on the female body politic, on self-representation and on agency. It also shows that these art works emphatically need to be recognised by a male-saturated art world.

Japan zoo makes wild fashion statement A Japanese zoo has taken the catwalk to a wild new level, using some of its fiercest inhabitants to rip and claw jeans to a fashionably distressed look. The facility northeast of Tokyo has unveiled 'Zoo Jeans', styled by the fangs and claws of lions, tigers and bears. Zoo officials said the material held up well, all things considered. 'We wrapped several pieces of denim around tyres and other toys. Once they were thrown into the enclosures, the animals jumped on them,' said zoo director Nobutaka Namae, adding that the pieces were later patched together to create the finished product.

How Premium Fashion Brands Are Maximizing Their Social Media ROI Social media and digital technology have forever changed the retail industry. In 2011, brands and retailers have reached a tipping point, digital innovations have decentralized commerce, and real-time consumer demand for designer merchandise has forever changed retail production cycles. Many fashion brands, mocked for their inability to move with the web because of a fear of accessibility, are no longer fighting the flow. Through their embrace of social media and social commerce, fashion brands are now innovating and profiting from their online marketing strategies. Sarajevo Artist Creates Math-Inspired Origami Dresses From Paper, Textiles While most of us have forgotten the basics of high-school geometry, Sarajevo student-designer Amila Hrustic finds inspiration in the ancient branch of mathematics. "Plato's Collection," an assortment of origami-esque dresses made from paper and textiles, is a mass of edges, vertices, and faces, with each dress corresponding to one of the five Platonic solids (the tetrahedron, cube, octahedron, dodecahedron, icosahedron). What culminates is a series of artfully structured forms that are as pleasing to the eye as they are mathematically sublime. Amila Hrustic, a student at the Academy of Fine Arts at the University of Sarajevo, found herself gravitating towards geometry—specifically Platonic solids—during her four years studying product design.

This London Fashion Week, We're Uniting the Realms of Fashion and Technology  I cannot believe it is almost that time of the year again - London Fashion Week. With just four days to go until the big night - Saturday 19 September, when friends, family and the media will gather to support my spring summer collection - the office is beyond crazy. Everything kind of builds to a grand crescendo as we frantically get every item of clothing finished to perfection, keeping everything and everyone involved in check. Fashion companies have discovered their secret weapon: archives The Coach headquarters sit on the crest of a hill on West 34th Street amid the dust and construction noise of New York City’s massive Hudson Yards red redevelopment. The building is the same midtown address that housed the brand’s original workshop when it launched in 1941 – Coach will begin rolling out its 75th anniversary offerings during fashion week this September – although its offices now occupy the whole building. Around back, an unmarked door leads to a tidy, hushed space stocked with meticulously organized handbags and billfolds, which will be an invaluable resource for the label as it heads into its next quarter century. Like many fashion companies trying to stand out in a luxury market increasingly fixated on authenticity, Coach has recognized that its rich history – and this in-house archive – is its secret weapon.

Arts and culture being 'systematically removed from UK education system' Creativity, culture and the arts are being systematically removed from the education system, with dramatic falls in the number of pupils taking GCSEs in design, drama and other craft-related subjects, a new report has revealed. A year in the writing, the Warwick commission report, published on Tuesday, examines all aspects of the creative arts sector: from film, theatre and dance to video games, pop music and fashion. It estimates the sector represents 5% of the British economy valued at £76.9bn. The report describes arts audiences as overwhelmingly middle class and white. It says that the wealthiest, best educated and least ethnically diverse 8% of society make up nearly half of live music audiences and a third of theatregoers and gallery visitors. Vikki Heywood, the chair of the commission, said two of the most eye-opening aspects of the inquiry were to do with cultural education and the lack of diversity in arts audiences.

UK retail sales volumes dip in June - BBC News UK retail sales volumes fell unexpectedly by 0.2% in June, after consumers bought fewer household goods, and less food and petrol. The figures from the Office for National Statistics (ONS) also showed the annual rate of sales growth slowed to 4.0% last month from 4.7% in May. That was the slowest annual growth rate since September 2014, and was below analysts' forecasts. Zendaya schools the world on cultural appropriation In a new interview Zendaya has weighed in on the heated subject of cultural appropriation. It’s a topic that keeps rearing its head, both in the media and on Twitter – whether it’s a conversation about M.I.A.’s new video or Kylie Jenner’s cornrows. Speaking with Nylon, the 18-year-old singer and actress stressed that there’s a difference between appreciating and appropriating other cultures. “You can go about it as cultural appreciation or cultural appropriation,” she said.