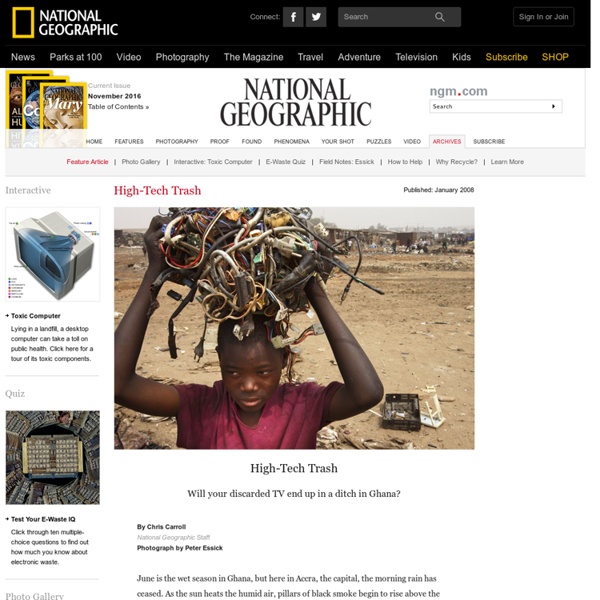 June is the wet season in Ghana, but here in Accra, the capital, the morning rain has ceased. As the sun heats the humid air, pillars of black smoke begin to rise above the vast Agbogbloshie Market. I follow one plume toward its source, past lettuce and plantain vendors, past stalls of used tires, and through a clanging scrap market where hunched men bash on old alternators and engine blocks. Soon the muddy track is flanked by piles of old TVs, gutted computer cases, and smashed monitors heaped ten feet (three meters) high. Beyond lies a field of fine ash speckled with glints of amber and green—the sharp broken bits of circuit boards. Choking, I pull my shirt over my nose and approach a boy of about 15, his thin frame wreathed in smoke. Another day in the market, on a similar ash heap above an inlet that flushes to the Atlantic after a downpour, Israel Mensah, an incongruously stylish young man of about 20, adjusts his designer glasses and explains how he makes his living. Related:  E-wastes

India's Environment Problem: Disposing Electronic Waste The high-pitched, nasal call of the neighborhood scrap collector is a familiar weekend sound in most Indian neighborhoods. In Noida, a quiet satellite city of New Delhi, Ashu Kumar has been collecting old newspapers, phones, computers, digital recorders and refrigerators for the past five years. And for years, at the end of each month, Kumar trekked down a dusty road to the Seelampur scrap market — the largest graveyard of India's ever growing electronic waste — to sell his wares. In India, yesterday's electronics are today's business, and Seelampur, about 9 miles (14.5 km) outside New Delhi, is the biggest scrap market in the country. On a typical day, visitors are greeted by piles of used goods, like the 50-ton mountain of old telephones that Mohammad Arif, a scrap trader, bought for $2,500 at an auction one winter morning. By evening, the mound will be dismantled and the parts sold off. A few yards from Arif's stall, Seelampur begins in earnest.

Piles of thrown-out TVs, laptops and phones pose an environmental risk Christmas gifts from past years meet a sad end at Absolute Green Electronics Recycling in California. Computers are dismantled. Their parts get sorted into cardboard bins. One bin holds nothing but hard drives. Stacked-up printers form a miniature mountain. “There are different grades of boards,” said owner and president Victor Kianipay, stepping past dust-covered TVs to poke into apple boxes filled with circuit boards. E-Waste A Global Problem This is electronic waste, or e-waste. Within five years, the annual figure may reach 65 million tons, the group estimates. A lot of companies send electronic waste to developing countries. “You see all these thousands — literally thousands — of women and young kids whose job is to cook circuit boards,” said Jim Puckett. Thirty-five nations have adopted the ideas of the Basel Convention, Puckett said. The U.S. Boosting Recycling In The U.S. Puckett has spent years investigating the issue. The old TVs are particularly bad. “I have kids.

Radioactive leaks found at 75% of US nuke sites Steam rises from cooling towers at Exelon Corp.'s nuclear plant in Byron, Ill., March 16, 2011. AP Photo BRACEVILLE, Ill. - Radioactive tritium has leaked from three-quarters of U.S. commercial nuclear power sites, often into groundwater from corroded, buried piping, an Associated Press investigation shows. The number and severity of the leaks has been escalating, even as federal regulators extend the licenses of more and more reactors across the nation. Tritium, which is a radioactive form of hydrogen, has leaked from at least 48 of 65 sites, according to U.S. While most leaks have been found within plant boundaries, some have migrated offsite. At three sites -- two in Illinois and one in Minnesota -- leaks have contaminated drinking wells of nearby homes, the records show, but not at levels violating the drinking water standard. U.S. nuke regulators weaken safety rulesFeds seek nuke plants' plans for terror attacksHigh radiation prompts evac at Ohio nuke plant Leaks Are Prolific

E-waste: The Environmental Crisis You've Never Heard Of The E-Waste Crisis In 2008, 60 Minutes ran a piece revealing what actually happens to our old electronics when we throw them away. In The Wasteland, CBS correspondent Scott Pelley follows the trail of electronic waste (e-waste) all the way to China. There, he finds fields of old computers and TVs from America lit on fire by locals looking to burn away plastics and valuable metals (see pictures below). Well, the short answer is worse. Yet, as eye-catching as these numbers are, the problem of e-waste has largely flown under the radar. As a society, we generally refuse to pay for things to be recycled. But here is the kicker, doing the wrong thing it isn’t actually free, and doing the right thing doesn’t have to be costly. This puts recyclers in a bind, and is largely why electronics is the fastest growing component of the municipal waste stream worldwide, according to Hershkowitz. This is where GreenCitizen steps in. Written by Jake Hanft.

E-Waste - Connecticut "We have forgotten how to be good guests, how to walk lightly on the earth as its other creatures do." ~ Barbara Ward, Only One Earth, 1972 From the mining of the raw materials to the recycling or disposal of our electronic products, electronics have a significant impact on the environment. By considering the environment when you purchase, use and dispose of a computer, television, or other electronic device, you can conserve energy, help the environment and save money. Related Topics Why Recycle Electronics? Computers and televisions are only part of the consumer electronics waste stream which also includes VCRs, radios, cell phones, and small appliances. Careful disposal of these items is important because many electronic products contain hazardous components. Responsible recycling and disposal of e-waste can help prevent exploitation of people in lesser developed countries where much of the e-waste from the U.S. has historically been disposed. Recycling E-Waste from the Home General

World's mountain of electrical waste reaches new peak of 42m tonnes | Environment A record amount of electrical and electronic waste was discarded around the world in 2014, with the biggest per-capita tallies in countries that pride themselves on environmental consciousness, a report said. Last year, 41.8m tonnes of so-called e-waste – mostly fridges, washing machines and other domestic appliances at the end of their life – was dumped, the UN report said. That’s the equivalent of 1.15m heavy trucks, forming a line 23,000km (14,300 miles) long, according to the report, compiled by the United Nations University, the UN’s educational and research branch. Less than one-sixth of all e-waste was properly recycled, it said. In 2013, the e-waste total was 39.8m tonnes – and on present trends, the 50-million-tonne mark could be reached in 2018. Topping the list for per-capita waste last year was Norway, with 28.4kg (62.5lbs) per inhabitant. The region with the lowest amount of e-waste per inhabitant was Africa, with 1.7kg per person.