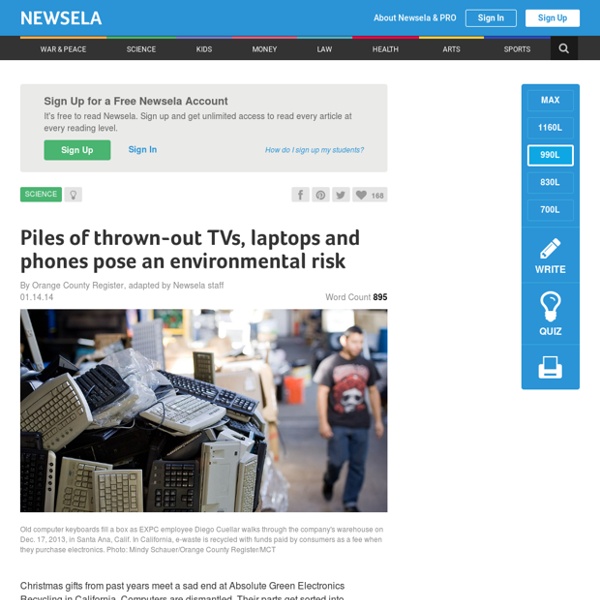 Christmas gifts from past years meet a sad end at Absolute Green Electronics Recycling in California. Computers are dismantled. Their parts get sorted into cardboard bins. One bin holds nothing but hard drives. Another holds AC adapters. Bins stretch in rows across a huge warehouse. Stacked-up printers form a miniature mountain. “There are different grades of boards,” said owner and president Victor Kianipay, stepping past dust-covered TVs to poke into apple boxes filled with circuit boards. E-Waste A Global Problem This is electronic waste, or e-waste. Within five years, the annual figure may reach 65 million tons, the group estimates. A lot of companies send electronic waste to developing countries. “You see all these thousands — literally thousands — of women and young kids whose job is to cook circuit boards,” said Jim Puckett. Thirty-five nations have adopted the ideas of the Basel Convention, Puckett said. The U.S. Boosting Recycling In The U.S. The old TVs are particularly bad. Related:  E-wastes

India's Environment Problem: Disposing Electronic Waste The high-pitched, nasal call of the neighborhood scrap collector is a familiar weekend sound in most Indian neighborhoods. In Noida, a quiet satellite city of New Delhi, Ashu Kumar has been collecting old newspapers, phones, computers, digital recorders and refrigerators for the past five years. And for years, at the end of each month, Kumar trekked down a dusty road to the Seelampur scrap market — the largest graveyard of India's ever growing electronic waste — to sell his wares. In India, yesterday's electronics are today's business, and Seelampur, about 9 miles (14.5 km) outside New Delhi, is the biggest scrap market in the country. On a typical day, visitors are greeted by piles of used goods, like the 50-ton mountain of old telephones that Mohammad Arif, a scrap trader, bought for $2,500 at an auction one winter morning. Most of that waste is bought from Indian consumers by scrap dealers and sold in underground recycling markets like Seelampur.

Living on Earth: E-waste Youth Activist Air Date: Week of January 4, 2008 stream/download this segment as an MP3 file Alex Lin (Courtesy of Alex Lin) Living on Earth interviews Alex Lin, who won the Brower Youth Award for his pioneering work on electronic waste. Lin recycled and refurbishes computers for kids in the U.S. and around the world. Transcript CURWOOD: One kid who needs no New Year’s resolutions on the environment is 14-year-old Alex Lin. When the electronic devices we use every day get taken apart or dumped, toxic substances, like lead, leech into the environment. And this year he received the prestigious Brower Youth Award for young environmental leaders. LIN: Thanks a lot. CURWOOD: So one day you’re reading the newspaper. LIN: I think what helped me choose to do this was that it’s such a little known problem, really. CURWOOD: So how many computers are you guys recycling? LIN: Recycling-wise we’re not really sure about the amount. CURWOOD: So it’s what—5,000 pounds a month or something like that? CURWOOD: Hey, Alex.

High-Tech Trash June is the wet season in Ghana, but here in Accra, the capital, the morning rain has ceased. As the sun heats the humid air, pillars of black smoke begin to rise above the vast Agbogbloshie Market. I follow one plume toward its source, past lettuce and plantain vendors, past stalls of used tires, and through a clanging scrap market where hunched men bash on old alternators and engine blocks. Soon the muddy track is flanked by piles of old TVs, gutted computer cases, and smashed monitors heaped ten feet (three meters) high. Choking, I pull my shirt over my nose and approach a boy of about 15, his thin frame wreathed in smoke. Another day in the market, on a similar ash heap above an inlet that flushes to the Atlantic after a downpour, Israel Mensah, an incongruously stylish young man of about 20, adjusts his designer glasses and explains how he makes his living. People have always been proficient at making trash. So what happens to all this junk?

ARKive - Discover the world's most endangered species Wildscreen's Arkive project was launched in 2003 and grew to become the world's biggest encyclopaedia of life on Earth. With the help of over 7,000 of the world’s best wildlife filmmakers and photographers, conservationists and scientists, Arkive.org featured multi-media fact-files for more than 16,000 endangered species. Freely accessible to everyone, over half a million people every month, from over 200 countries, used Arkive to learn and discover the wonders of the natural world. Since 2013 Wildscreen was unable to raise sufficient funds from trusts, foundations, corporates and individual donors to support the year-round costs of keeping Arkive online. Therefore, the charity had been using its reserves to keep the project online and was unable to fund any dedicated staff to maintain Arkive, let alone future-proof it, for over half a decade. Despite appeals for support, just 85 of our 5.6 million users in 2018 made a donation.

Radioactive leaks found at 75% of US nuke sites Steam rises from cooling towers at Exelon Corp.'s nuclear plant in Byron, Ill., March 16, 2011. AP Photo BRACEVILLE, Ill. - Radioactive tritium has leaked from three-quarters of U.S. commercial nuclear power sites, often into groundwater from corroded, buried piping, an Associated Press investigation shows. The number and severity of the leaks has been escalating, even as federal regulators extend the licenses of more and more reactors across the nation. Tritium, which is a radioactive form of hydrogen, has leaked from at least 48 of 65 sites, according to U.S. While most leaks have been found within plant boundaries, some have migrated offsite. At three sites -- two in Illinois and one in Minnesota -- leaks have contaminated drinking wells of nearby homes, the records show, but not at levels violating the drinking water standard. U.S. nuke regulators weaken safety rulesFeds seek nuke plants' plans for terror attacksHigh radiation prompts evac at Ohio nuke plant Leaks Are Prolific

Polar Bears and Climate Change Floods. Droughts. Heat waves. In fact, if our chief scientist, Dr. "Events like these will continue to increase in number and severity as the world continues to warm." What's causing climate change? What's causing climate change? Greenhouse gases (GHGs) in the atmosphere act like a blanket that keeps the earth warm. Other factors such as deforestation have added to the problem. Do scientists agree about climate change? The laws of physics dictate that the world will grow warmer and warmer as greenhouse gas concentrations rise. Are scientists still debating climate change? The important point to remember is that natural fluctuations in the climate system will continue with global warming, but the baseline will climb higher and higher. And once we cross those thresholds, it will be bad news not only for polar bears—but countless other species, including humans. How are polar bears affected by climate change? What can be done? Humans have caused this problem, humans can fix it.

E-waste: The Environmental Crisis You've Never Heard Of The E-Waste Crisis In 2008, 60 Minutes ran a piece revealing what actually happens to our old electronics when we throw them away. In The Wasteland, CBS correspondent Scott Pelley follows the trail of electronic waste (e-waste) all the way to China. Well, the short answer is worse. Yet, as eye-catching as these numbers are, the problem of e-waste has largely flown under the radar. As a society, we generally refuse to pay for things to be recycled. But here is the kicker, doing the wrong thing it isn’t actually free, and doing the right thing doesn’t have to be costly. This puts recyclers in a bind, and is largely why electronics is the fastest growing component of the municipal waste stream worldwide, according to Hershkowitz. This is where GreenCitizen steps in. Written by Jake Hanft.

Alex Lin, Teenage Activist He's overseen the recycling of 300,000 pounds of e-waste. He's successfully lobbied the Rhode Island state legislature to ban the dumping of electronics. He's used refurbished computers to create media centers in developing countries like Cameroon and Sri Lanka to foster computer literacy. He’s Alex Lin and he’s just 16 years old. “I don’t see anything uncommon in it,” says Lin, a high school senior from Westerly, Rhode Island. “My friends and I have been doing this since fifth grade. Lin’s catalytic moment came in 2004 when he chanced upon a Wall Street Journal article. E-waste, or electronics garbage, is the fastest growing section of the U.S. trash stream. While there is no federal law banning e-waste, 20 states have passed legislation mandating statewide e-waste recycling. If only the states with e-waste laws in their 2010 legislative pipeline—Kentucky, Massachusetts, Nebraska, and Utah, to name a few—had an Alex Lin at their disposal. The Rise of E-Waste, the Birth of Team WIN

Electronic waste Defective and obsolete electronic equipment Electronic waste or e-waste describes discarded electrical or electronic devices. Used electronics which are destined for reuse, resale, salvage, recycling, or disposal are also considered e-waste. Electronic scrap components, such as CPUs, contain potentially harmful components such as lead, cadmium, beryllium, or brominated flame retardants. Definition[edit] Hoarding (left), disassembling (center) and collecting (right) electronic waste in Bengaluru, India "Electronic waste" or "E-Waste" may be defined as discarded computers, office electronic equipment, entertainment device electronics, mobile phones, television sets, and refrigerators. CRTs have relatively high concentration of lead and phosphors (not to be confused with phosphorus), both of which are necessary for the display. The EU and its member states operate a system via the European Waste Catalogue (EWC)- a European Council Directive, which is interpreted into "member state law".