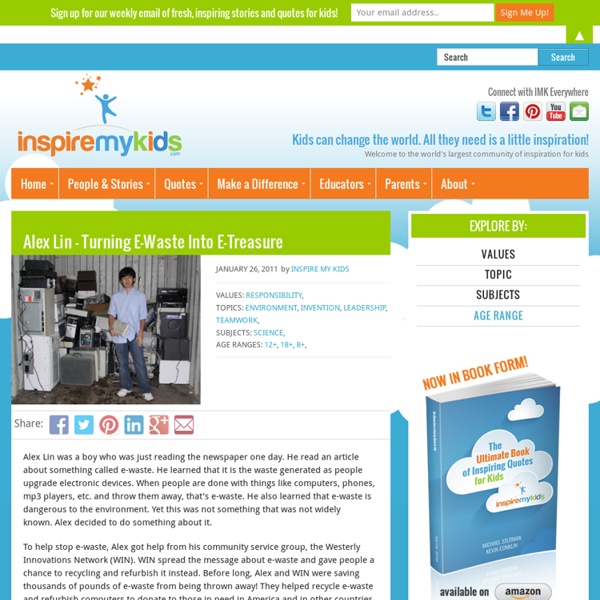 Alex Lin was a boy who was just reading the newspaper one day. He read an article about something called e-waste. He learned that it is the waste generated as people upgrade electronic devices. When people are done with things like computers, phones, mp3 players, etc. and throw them away, that’s e-waste. He also learned that e-waste is dangerous to the environment. Yet this was not something that was not widely known. To help stop e-waste, Alex got help from his community service group, the Westerly Innovations Network (WIN). Additional Resources: Here is an article about Alex and his efforts.Here is an interview with Alex.Click here for more InspireMyKids stories about the environment.Find great books in our store, like Acting for Nature, about how children can help the environment.This video is about recycling e-waste. Topics for Discussion: Think about all the electronics families have. Take Action: Teacher Features:

Alex Lin, Teenage Activist He's overseen the recycling of 300,000 pounds of e-waste. He's successfully lobbied the Rhode Island state legislature to ban the dumping of electronics. He's used refurbished computers to create media centers in developing countries like Cameroon and Sri Lanka to foster computer literacy. He’s Alex Lin and he’s just 16 years old. “I don’t see anything uncommon in it,” says Lin, a high school senior from Westerly, Rhode Island. Lin’s catalytic moment came in 2004 when he chanced upon a Wall Street Journal article. E-waste, or electronics garbage, is the fastest growing section of the U.S. trash stream. While there is no federal law banning e-waste, 20 states have passed legislation mandating statewide e-waste recycling. If only the states with e-waste laws in their 2010 legislative pipeline—Kentucky, Massachusetts, Nebraska, and Utah, to name a few—had an Alex Lin at their disposal. Alex Lin, third from right, has taken e-waste matters into his own hands. Reduce, reuse, and recycle.

Teenage girl is dogs best friend | NZNews While most teenage girls are busy doing their nails and downloading the latest music, Faye Carey is helping re-home dozens of abandoned dogs. The 16-year-old Waikato teen volunteers with her local branch of Animal Control, giving abandoned animals a second chance at life. She has set up a Facebook page, Animal Re-home Waikato, where she advertises puppies and dogs who need adopting. It all started when Faye underwent a week of work experience at Animal Control last November. "We picked up a puppy in the pound the first day I went to Animal Control and then on my last day he was still there and I felt really sorry for him," she says. "So I advertised him on TradeMe and he got a lot of interest and he went to a lovely home in Auckland." The idea for the Facebook page came when Faye was trying to re-home a litter of abandoned kittens, and needed a free way to advertise. The page has nearly 300 likes and a loyal following of satisfied new parents. "I'd love to have a career in Animal Control.

Animal Homelessness Is a Community Challenge | Gary Weitzman, DVM Our relationships with the animals we keep are highly personal. They provide us with unconditional love, and we take on a personal responsibility for making sure that they are well cared for. But when the bond between an animal and his guardian is broken, as when an animal is lost, abandoned, or surrendered to a shelter, who then has responsibility for the animal and his care? Most people would say it's the local animal shelter's responsibility. That's because we can't do this work by ourselves. In fact, just a few weekends ago we had an amazing adoption event -- a real example of community partnership. This private veterinary hospital, the largest in the nation's capital, understands the need for community involvement in animal welfare. With the help of that hospital, we made a lot of new friends and found many new homes. And that's exactly what we bought our new adoption truck to do -- bring our animals literally into the waiting arms of adopters. It's all about community.

Alex Libby |Bully| Independent| A common theme in the numerous comments we’ve received to-date on the film Bully, centers on one of the film’s most moving characters, Alex Libby, a sweet-natured Iowa teen who had been bullied for years. Since many viewers were worried about him and were understandably empathetic, we thought it might be good to give you an update on Alex. First of all, to cut to the chase in the happiest of ways: this year Alex worked as an intern for the Bully Project itself, in their offices in New York City! Last year, Alex was featured on CNN, and as you can see from this clip he’s evolving into a confident young man passionately hoping to help others who are being bullied: Alex was also featured, along with Kelby Johnson, in a piece Anderson Cooper did on the film and bullying, called “The Bully Effect.” As his mother says in the clip above, the family eventually left their Iowa town for Oklahoma City, where they found a school they felt had a better environment for both their kids.

Child slavery and chocolate In "Chocolate's Child Slaves," CNN's David McKenzie travels into the heart of the Ivory Coast to investigate children working in the cocoa fields. (More information and air times on CNN International.) By David McKenzie and Brent Swails, CNN Daloa, Ivory Coast (CNN) - Chocolate’s billion-dollar industry starts with workers like Abdul. He squats with a gang of a dozen harvesters on an Ivory Coast farm. Abdul holds the yellow cocoa pod lengthwise and gives it two quick cracks, snapping it open to reveal milky white cocoa beans. Abdul is 10 years old, a three-year veteran of the job. He has never tasted chocolate. During the course of an investigation for CNN’s Freedom Project initiative - an investigation that went deep into the cocoa fields of Ivory Coast - a team of CNN journalists found that child labor, trafficking and slavery are rife in an industry that produces some of the world’s best-known brands. It was not supposed to be this way. More about the Harkin-Engel Protocol It didn’t.

Teen star making a difference for shelter animals - National Dogs Lou Wegner is more than your typical teen. Wegner doesn't spend all of his free time shooting hoops, skateboarding or texting his friends - he has more important activities to engage in - lifesaving endeavors. This inspiring young man is a singer, actor, swordsman, and animal activist. In 2009, Wegner founded "Kids Against Animal Cruelty" - a Facebook page created as a place for kids to come together to fight for the rights of animals. Wegner wanted to reach out to other teens to let them know that millions of cats and dogs are dying inside of our nation's shelters. He wants teens to understand the importance of responsible pet ownership - especially the importance of spay/neuter. He hopes that he can motivate teens to adopt rather than shop - teaching these young adults that wonderful, worthy pets are waiting at shelters for a home. Teens are more apt to listen to a peer - someone who isn't lecturing about "what is right". Partnered with him in these PSA's were Denise Richards and Malese Jow.