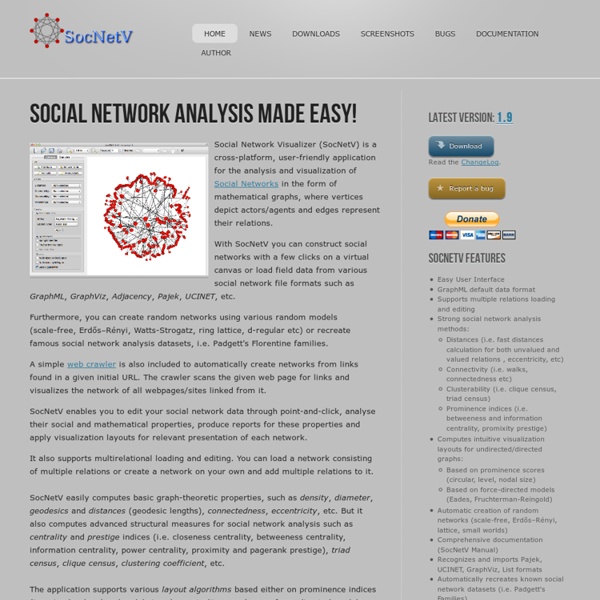 www.textrend.org Welcome [Savannah] Gephi - The Open Graph Viz Platform Cytoscape: An Open Source Platform for Complex Network Analysis and Visualization 7-Zip mikeaddison93/Gamepy Overview — NetworkX 1.7 documentation Gnuzilla and IceWeasel Introducing GNUzilla and IceCat GNUzilla is the GNU version of the Mozilla suite, and GNU IceCat is the GNU version of the Firefox browser. Its main advantage is an ethical one: it is entirely free software. While the Firefox source code from the Mozilla project is free software, they distribute and recommend non-free software as plug-ins and addons. In addition, GNU IceCat includes some privacy protection features, included in a separate addon: Some sites refer to zero-size images on other hosts to keep track of cookies. To see these new features in action, some test pages are available. Downloads Official releases of IceCat are available from ftp.gnu.org, or any GNU mirror. Free addons We maintain a list of free addons. Free plugins GNUzilla runs its own plugin finder service at gnuzilla.gnu.org. Be sure the plugin.default_plugin_disabled attribute is set to false. Langpacks You can find langpacks for IceCat on the official GNU FTP: Mailing lists Maintainer

T-pattern analysis Theme detects statistically significant time patterns in sequences of behaviors. These so called T-patterns are based on the timing of events, relative to each other. This can give striking new insights into the structure of behavior that cannot be found with the naked eye or with any other method. Scientists have been conducting research with Theme for over twenty years, and Theme has been successfully used in a wide variety of disciplines (developmental psychology, psychiatry, etc). Theme can be used in conjunction with any of the solutions described on this website, or as a stand-alone package. Theme was developed by PatternVision Ltd. T-patterns Timing and order are crucial to the effectiveness of nearly any kind of action, but they are often hard to capture in statistics. Well-established model Theme is based on a well-established mathematical model. Theme is especially effective in the analysis of social interactions. Social interactions Robust

S Routines for Social Network Analysis in the R Environment Most of which involve social network analysis, though a wee bit 'o other stuff is available as well.... Introduction and Caveats This page serves, as one might expect, to allow other researchers to access some of the data analysis tools I've developed in the S language. Caveats: This software is provided on an unsupported, as-is basis, under the terms of the GNU Public License . Getting and Using R The R statistical computing environment is distributed under the GNU Public License , and can be freely obtained either as source or as precompiled binaries for a wide range of platforms. The Statnet Project Most of the material contained here is now part of the Statnet Project , a collaborative effort to develop Free Software tools for network analysis.

Gnaural: A Binaural-Beat Audio Generator Three Major Perspectives in Sociology Sociologists analyze social phenomena at different levels and from different perspectives. From concrete interpretations to sweeping generalizations of society and social behavior, sociologists study everything from specific events (the micro level of analysis of small social patterns) to the “big picture” (the macro level of analysis of large social patterns). The pioneering European sociologists, however, also offered a broad conceptualization of the fundamentals of society and its workings. Sociologists today employ three primary theoretical perspectives: the symbolic interactionist perspective, the functionalist perspective, and the conflict perspective.

The igraph library for complex network research June 24, 2015 Release Notes This is a new major release, with a lot of UI changes. Apart from the new names, the biggest change in this release is that most functions that used to return numeric vertex or edge ids, return vertex/edge sequences now. We will update the documentation on this site, once the package is on CRAN and available for all architectures. More → January 16, 2015 A couple of days ago we changed how we use GitHub for igraph development. Main igraph repositories now: April 21, 2014 Some bug fixes, to make sure that the code included in 'Statistical Analysis of Network Data with R' works. Detailed changes: Graph drawing: fix labels of curved edges, issue #181.Graph drawing: allow fixing edge labels at given positions, issue #181.Drop the 'type' vertex attribute after bipartite projection, the projections are not bipartite any more, issue #255.Print logical attributes in header properly (i.e. encoded by l, not x, which is for complex attributes. February 4, 2014 igraph @ github