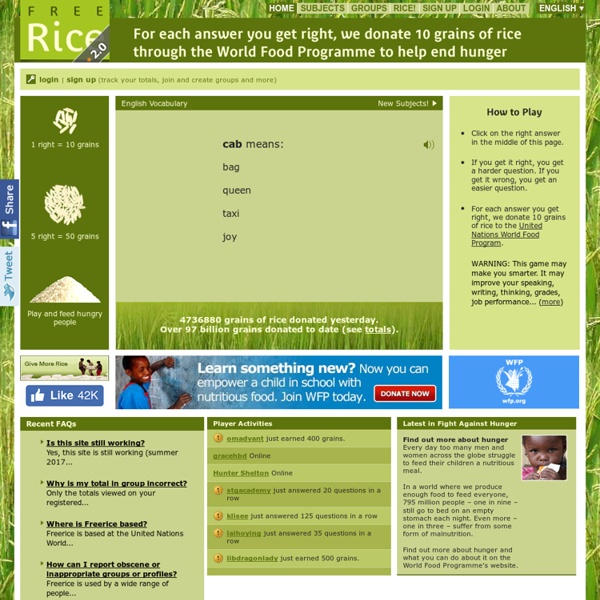 Where do new words come from? - Marcel Danesi Find the creation of new words fascinating? Click here to find out more. How new words are born is a great article on this topic. Which Word Game - Pick the right word to fit the context I * to go to a private school, but I don't any more.!@#$@! "Used to" is the correct phrase. !@#$@! Video Lesson: Mr. Bean – Tim's Free English Lesson Plans Follow me on twitter Just a quick note… Before you use these materials… We’ve created a new podcast aimed at B2+ level English students and teachers alike. You can listen for free at our SoundCloud page below. We have released 5 episodes so far and you can download teacher’s notes to accompany them from our Facebook page or from this blog.

The Ultimate Directory Of Free Image Sources So, you need an image for your blog? We’ve spent some time categorizing our favorite sources for free images and organizing them in such a way as to help you find what you’re looking for. Here are the criteria we’ve examined: Subjects: Does a site focus on specific genres of images, or is it a mass collection of various image types? High Resolution: Lots of great image resources emerged in the pre-Web 2.0 phase, but it wasn’t until bandwidth dramatically increased that allowed for the uploading of much higher resolution images suitable for editing and printing. 66 Facts You May Not Have Known About The English Language The English language is, quite literally, the greatest language in the world. Great in terms of size - the current edition of the Oxford English Dictionary contains 615,000 entries. Great in terms of scope — it’s an official language in seventy-nine countries and territories. And great in terms of, well, greatness — it’s just one fantastic mishmash of borrowings, inventions, corruptions, misinterpretations, misspellings, alterations, words you’ll never need, and words you never even knew you’ll never need. Since December 2013, @HaggardHawks has been trying to prove precisely this by tweeting odd words, word origins and language facts everyday. 1,300 tweets later, it turns six months old this week and so to celebrate, here are 66 random facts from our first semester that hopefully go some way towards showing how great — and how downright bizarre — the English language can be.

textorizer Textorizer allows you to make pictures formed with text. It is best described by the sample images below. Although there are many versions around, the only one that is continuing to supported is this one. Excoffizer takes a picture and produces a vector rendition of the picture, made of parallel lines of varying thickness. It is inspired by Roger Excoffon's pictograms for the 1968 Grenoble Winter Olympics. The previous version of Textorizer came as a downloadable application. How to Play the Game of Taboo: 13 Steps Edit Article Three Parts:Starting the GamePlaying Each RoundGaining an Edge on Your OpponentsCommunity Q&A Taboo is a classic card game, released by Hasbro in 1989.

Yeti 'Nests' Found in Russia? Bigfoot researcher and biologist John Bindernagel claims his research group has found evidence that the Yeti (a Russian "cousin" of the American Bigfoot) not only exists, but builds nests and shelters by twisting tree branches together. "We didn't feel like the trees we saw in Siberia had been done by a man or another mammal.... Twisted trees like this have also been observed in North America and they could fit with the theory that Bigfoot makes nests. The nests we have looked at are built around trees twisted together into an arch shape," Bindernagel told the British tabloid The Sun. Bindernagel was part of a small group of scientists who visited western Siberia to examine evidence of the Yeti in October.