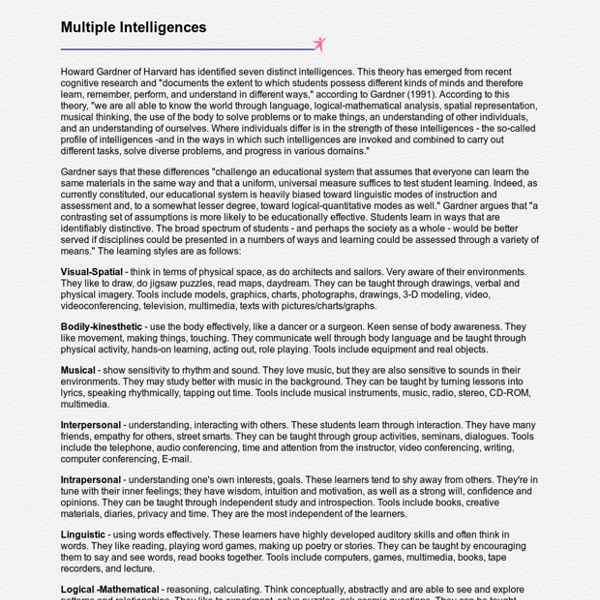 Howard Gardner of Harvard has identified seven distinct intelligences. This theory has emerged from recent cognitive research and "documents the extent to which students possess different kinds of minds and therefore learn, remember, perform, and understand in different ways," according to Gardner (1991). According to this theory, "we are all able to know the world through language, logical-mathematical analysis, spatial representation, musical thinking, the use of the body to solve problems or to make things, an understanding of other individuals, and an understanding of ourselves. Where individuals differ is in the strength of these intelligences - the so-called profile of intelligences -and in the ways in which such intelligences are invoked and combined to carry out different tasks, solve diverse problems, and progress in various domains."

Imagination and Reality Flow in Opposite Directions in the Brain As real as that daydream may seem, its path through your brain runs opposite reality. Aiming to discern discrete neural circuits, researchers at the University of Wisconsin-Madison have tracked electrical activity in the brains of people who alternately imagined scenes or watched videos. “A really important problem in brain research is understanding how different parts of the brain are functionally connected. What areas are interacting? What is the direction of communication?”

Technology and Multiple Intelligences What are the multiple intelligences? What do they have to do with technology? How can I incorporate these ideas into teaching and learning? In his 1983 book called Frames of Mind, Howard Gardner of Harvard University identified seven intelligences we all possess. Because our understanding of the brain and human behavior is constantly changing, the number of intelligences is expanding. Two to three new intelligences had been added recently. Multipotentiality: multiple talents, multiple challenges One of the myths of highly talented people is they can choose whatever personal and career paths they want, and realize their abilities without hindrance. It doesn’t exactly work that easily. In her Unwrapping the Gifted post “ Multipotentiality ,” K-12 gifted education specialist Tamara Fisher quotes Bryant (a pseudonym), a graduating senior who lists his possible future careers as “applied psychologist, scientific psychologist, college teacher, philosophy, mathematics, architect, engineer.” He says, “I find it difficult to choose between careers because I fear how large the choice is. Having many options available is pleasant, but to determine what I will do for many years to come is scary.”

The Center for Nonviolent Communication The following list of needs is neither exhaustive nor definitive. It is meant as a starting place to support anyone who wishes to engage in a process of deepening self-discovery and to facilitate greater understanding and connection between people. We have another list that might also be of interest to you: a list of feelings. 35 Scientific Concepts That Will Help You Understand The World, by Aimee Groth In order to sharpen our reasoning skills, we must have a good grasp of our own cognitive biases, as well as the basic laws of the universe. But in a dynamic world, new laws are constantly emerging. The editors over at Edge.org asked some of the most influential thinkers in the world — including neuroscientists, physicists and mathematicians — what they believe are the most important scientific concepts of the modern era. The result is "This Will Make You Smarter: New Scientific Concepts To Improve Your Thinking," a compilation of nearly 200 essays exploring concepts such as the "shifting baseline syndrome" and a scientific view of "randomness." We've highlighted 35 of the concepts here, crediting the author whose essay highlights the theory.

MI Intro ONE OF THE MOST COMPELLING, yet controversial new approaches to education reform is Multiple Intelligences Theory, or MI. Conceived of by Howard Gardner of the Harvard Graduate School of Education and Harvard Project Zero, MI first swept the worlds of education, cognitive science and developmental psychology in 1983 with the publication of Gardner's treatise, Frames of Mind. In the decade since Frames, the work of Dr. Emotional Intelligence Test This is an interactive version of the Personality-Based Emotional Intelligence Test. Introduction: The term Emotional Intelligence has been given many specific definitions since it gained popularity in the 1980s, but has is generally taken as theorized aspects of intelligence that that are not general intelligence but instead specific to people, such as understanding other peoples perspectives. The idea of EI has been very popular, although a persistent problem of the field is that no one is really sure how to measure EI.

How Your Brain Decides Without You - Issue 19: Illusions Princeton’s Palmer Field, 1951. An autumn classic matching the unbeaten Tigers, with star tailback Dick Kazmaier—a gifted passer, runner, and punter who would capture a record number of votes to win the Heisman Trophy—against rival Dartmouth. Princeton prevailed over Big Green in the penalty-plagued game, but not without cost: Nearly a dozen players were injured, and Kazmaier himself sustained a broken nose and a concussion (yet still played a “token part”). It was a “rough game,” The New York Times described, somewhat mildly, “that led to some recrimination from both camps.”