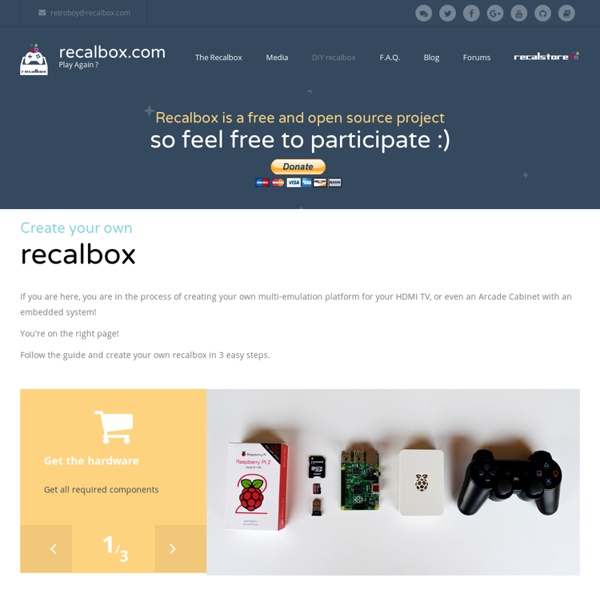 Hologram Time Traveler Time Traveler or Hologram Time Traveler is a stereographic laserdisc FMV arcade game released in 1991 by Sega and designed by Dragon's Lair creator Rick Dyer. It is called the "World's First Holographic Video Game" because it utilizes a special arcade cabinet that projects the game's characters. The holographic effect is an optical illusion using a huge curved mirror and a CRT television set. Thanks to "rdg2009" from the Daphne IRC channel, SINGE now has a Time Traveler emulator!

Cliff Hanger Remastered - The 2009 Restoration Introduction This webpage is about restoring the "Cliff Hanger" laserdisc video that is used with the Daphne emulator. The goal is to restore great image quality and convert it to progressive frames. Arcade Upload Stéphane JEAN-LOUIS Loading... Working... ► Play all MAME 0.151 ROMs While I appreciate the noble intent of the uploader, 'historical value' (fair use) is probably not going to cut it here. Many of these games have trademarked characters that live on in modern incarnations; some of them are still being sold by their owners, wrapped in proprietary emulators; and many of these ROMs are 'bootlegs' and circumvent encryption and copy protection in direct violation of the DMCA. Further, many of these games are still in operation, in arcades, bus stations and amusement parks around the world.

RetroPie 3.6 is Released – petRockBlog RetroPie on Raspberry Pi 3? Get RetroPie 3.6! This version is released a little earlier than originally planned, due to the release of the fantastic Raspberry Pi 3 – which our previous 3.5 will not boot on due to having out of date firmware. Along with Raspberry Pi 3 compatibility this release brings a bunch of interesting experimental emulators such as Daphne for emulation of classic LaserDisc arcade games, a myriad of libretro cores, and a few game engines. We’ve also worked around the pesky insert coin bug that has plagued the arcade emulators.

Arcade Game Studio™ - "create games with a real classic arcade feel" ARGS is a program tool for making games with the look and feel of the '80s arcade games. Includes genres such as Run'n'Gun, vertical and horizontal Shooters or Platform games, you will be able to make similar games to Pac-Man, Commando, 1942, Ghosts 'n' Goblins or Gauntlet, all with your own sprite sheets, pixel art, sound effects and music. You also get a real arcade feel while playing, check this images taken with the program on recreating classic games. Ghosts 'n' Goblins