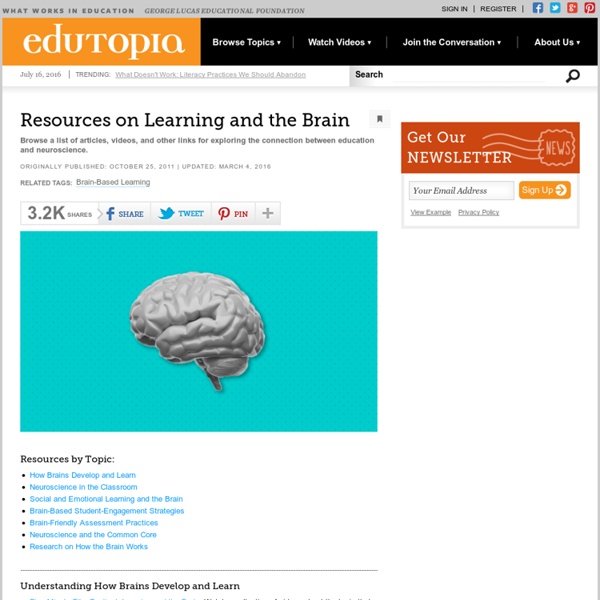 Facebook Edutopia on Facebook Twitter Edutopia on Twitter Google+ Pinterest Edutopia on Pinterest WHAT WORKS IN EDUCATION The George Lucas Educational Foundation Understanding How Brains Develop and Learn Five-Minute Film Festival: Learning and the Brain: Watch a collection of videos about the brain that will get you thinking about how findings from neuroscience can be applied in the classroom. Back to Top Applying Neuroscience in the Classroom Strategies for Strengthening the Brain's Executive Functions: Use these classroom strategies to help students better understand and develop executive functions. Social and Emotional Learning and the Brain Brain Labs: A Place to Enliven Learning: Consider creating a brain lab in your classroom or school to teach children about metacognition and develop skills for self-reflection, attention, emotional regulation, and cognitive flexibility. Brain-Based Student-Engagement Strategies Brain-Friendly Assessment Practices Neuroscience and the Common Core

Metalearning, The Four Hour Chef, and Instructional Design Sharebar My ears perked up when I heard the word metalearning in an interview with the author of The Four Hour Chef, a new book by Tim Ferriss. I was curious how metalearning—roughly defined as learning how to learn—related to a cook book. I wondered if the author had devised a new speed learning model based on experience that could be applied to instructional design. As it turns out, the author learns to cook as a way to demonstrate his methods for accelerated learning.

Is a “Growth Mindset” Enough? – The Principal of Change The quote above from a Thomas Friedman article on what Google looks for employees is one that has stuck with me. It was a huge reason why I wrote “The Innovator’s Mindset” in the first place. Yet this post was sparked by some conversations as well as this blog post by Adam Schoenbart comparing my book to E.D. How to Determine if Student Engagement is Leading to Learning Excerpted from the book, “UnCommon Learning: Creating Schools That Work for Kids,” by Eric Sheninger, published by Corwin, 2015. Engagement Does Not Always Equate to Learning No matter where I am, whether it is a physical location or virtual, I am always hearing conversations about how technology can be used to engage students effectively. This is extremely important as the majority of students spend six to eight hours a day in schools where they are completely disengaged. I for one can’t blame today’s learner for being bored in school when I all have to do is observe my own son at home playing Minecraft to see firsthand his high level of engagement. His Minecraft experiences provide meaning and relevance in an environment that is intellectually stimulating but, more importantly, fun.

Advanced Distributed Learning How do you capture the thought process of an expert gamer as they make their way through a game? How do you map out, scientifically, exactly what it takes to conquer a game like Portal 2? Background: Game Design for Cognitive Adaptability Members of the ADL Next Generation Learner Team are currently studying how video games can be leveraged for learning and understanding cognitive capabilities. We recently studied the effects of playing a game with certain design characteristics, and of amount of game play experience in general, on cognitive adaptability, a skill that involves responding to uncertainty and to changing circumstances and monitoring one’s own thinking processes. Cognitive Task Analysis

Developing a Growth Mindset in Teachers and Staff An idea that is beginning to gain a lot of favour in educational circles at the moment is the notion of fixed versus growth mindsets, and how they might relate to students and learning. Based on the work of Stanford University psychologist, Carol Dweck, the idea of mindset is related to our understanding of where ability comes from. It has recently been seized upon by educators as a tool to explore our knowledge of student achievement, and ways that such achievement might be improved.

6 Golden Rules For Engaging Students - 6 Golden Rules For Engaging Students by TeachThought Staff If the mind of a student isn’t engaged, understanding and content mastery don’t stand a chance; If the mind and heart together aren’t engaged, long-term retention and transfer of understanding and content mastery are unlikely as well. The accompanying graphic does a good job of representing both of these sides of “engagement.” A Neurologist Makes the Case for the Video Game Model as a Learning Tool The popularity of video games is not the enemy of education, but rather a model for best teaching strategies. Games insert players at their achievable challenge level and reward player effort and practice with acknowledgement of incremental goal progress, not just final product. The fuel for this process is the pleasure experience related to the release of dopamine. Dopamine Motivation The human brain, much like that of most mammals, has hardwired physiological responses that had survival value at some point in evolutionary progression. The dopamine-reward system is fueled by the brain's recognition of making a successful prediction, choice, or behavioral response.

How Tapping Into a Youth’s Identity Can Excite an Interest in Learning Excerpted from the book “Participatory Culture in a Networked Era: A Conversation on Youth, Learning, Commerce and Politics” by Henry Jenkins, Mizuko (Mimi) Ito and danah boyd, published by Polity. The following is in Chapter 4, “Learning and Literacy.” What Interests Are Valued?

Educational technology’s next move: Tools to help kids learn with their bodies. Photo by Ryan Anson/AFP/Getty Images Today’s educational technology often presents itself as a radical departure from the tired practices of traditional instruction. But in one way, at least, it faithfully follows the conventions of the chalk-and-blackboard era: EdTech addresses only the student’s head, leaving the rest of the body out. Treating mind and body as separate is an old and powerful idea in Western culture. But this venerable trope is facing down a challenge from a generation of researchers—in cognitive science, psychology, neuroscience, even philosophy—who claim that we think with and through our bodies.

7 Wonderful YouTube Channels for Motivational Videos to Use in Class December 22, 2015 Motivation is the motor of learning. It is an essential element in our growth as teachers, educators and students. Motivation drives us to seek out new paths of learning and explore unfamiliar lands.

Writing In The 21st Century What are the arts but products of the human mind which resonate with our aesthetic and emotional faculties? What are social issues, but ways in which humans try to coordinate their behavior and come to working arrangements that benefit everyone? There's no aspect of life that cannot be illuminated by a better understanding of the mind from scientific psychology. Education Week Many thanks to Sabba Quidwai (@AskMsQ) for this guest post. In addition to serving as the Director of Innovative Learning for the University of Southern California - Keck School of Medicine, Sabba works with us as an instructor at EdTechTeacher. We live in a world today where knowledge is a commodity. Instead of focusing on mastering content, we need to focus on mastering skills and developing mindsets such as creative confidence, empathy and failing forward, to name just a few. In an article previewing his new book, "The Choose Yourself Guide to Wealth," James Altucher talks about the death of the salaried employee and offers strategies for success in today's new economy.

Why Identity and Emotion are Central To Motivating the Teen Brain By Emmeline Zhao For years, common experience and studies have prescribed that humans learn best in their earliest years of life – when the brain is developing at its fastest. Recently, though, research has suggested that the period of optimal learning extends well into adolescence. The flurry of new findings may force a total rethinking of how educators and parents nurture this vulnerable age group, turning moments of frustration into previously unseen opportunities for learning and academic excitement. New evidence shows that the window for formative brain development continues into the onset of puberty, between ages 9 and 13, and likely through the teenage years, according to Ronald Dahl, professor of community health and human development at the University of California, Berkeley.