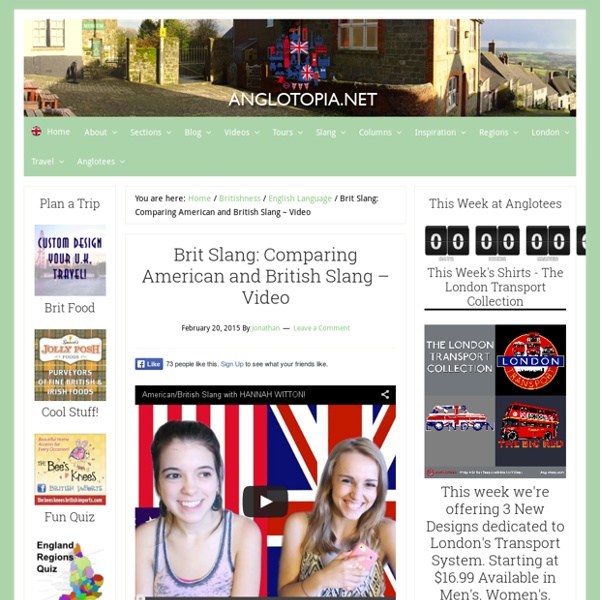 Teenagers and UK culture Why bring UK culture to the teen classroom? We can introduce UK culture into the English classroom to help our students improve their English and at the same time learn about values and ways of doing things which may be different to theirs. Learning about life and culture in the UK can be very motivating as it brings the language alive for learners and creates a link between language and real life. See if you agree with these comments from teachers on teaching UK culture to their teenage learners: ‘We need to avoid reinforcing erroneous British stereotypes to our teenagers.

Man eats iron nails Meet Long Yunsheng, a man from China with a penchant for iron nails. Apart from Long doesn't collect the iron nails, he eats them. Yes, you heard correctly. Long easily swallows several nails with a length of three to five centimetres. Washing them down with a cup of water, Long stuns everyone around him, as he eats the nails with ease. British Slang If you’re planning on visiting London in the future, you might just want to familiarise yourself with some British Slang expressions that are very commonly used by the British. They will be very useful particularly if you’re likely to be socialising with Londoners. 1. Project-based learning, the USA and Authentic Video in the EFL classroom The Globe Trekker/Pilot Guides video collection is a treasure trove for any English teacher. It encompasses extensive material from every corner of the world, and especially English-speaking countries are lavished with attention. Australia, Canada, Scotland, Wales, Ireland, England – you name it. Even individual cities are endowed with an approx. 50-minute complete video of its own, like London, New York City, San Francisco, Los Angeles, New Orleans to name but a few. Covering the United States satisfactorily in the language classroom is a daunting project, especially if you want to give your students more than a superficial understanding of its history, geography, language and people.

Email - Stop bullying: what you can do - ADL Dear Friend, Every day, young people are demeaned and harassed because of their race, religion, social class, sexual orientation or some other aspect of their identity. We now know that name-calling and bullying can devastate children—both emotionally and academically. It can also lead to bias-motivated violence. That’s why it’s important for all of us to interrupt bullying when we see it—and to send a clear message that bullying will not be tolerated. ADL—for decades a leader in anti-bias and anti-bullying education—has expert resources to guide students, educators and families in the best ways to stop bullying. London If you live in London, are visiting England's capital, or are studying London, why not bring... This is Activity Village's collection of original London colouring pages. Take a tour around... Here's a brand new collection of printable word search puzzles, mazes and word scrambles for... Use these fun London postcards - quick and easy to print onto paper, cut out and stick - as a... Just for fun, these simple illustrated posters for younger children feature some of London's...

Dragons in New York The world’s largest lizard species returns to New York’s Bronx Zoo where an exhibit called “Amazing Monitors” opens on Saturday. The zoo’s three Komodo dragons, two female and one male, will roam through the indoor space throughout the day, one at a time. The trio is still just teenagers and are just over five feet long (1.5 metres). The adult males can grow to nine feet (2.7m) from nose to tail and weigh around 163 kilos. These dragons are native to the Indonesian islands. 75 Simple British Slang Phrases You Should Probably Start Using Oh, the Brits. No-one can snark quite like they do, and there are certain turns of phrase that are so utterly delightful, the rest of the world really should sit up and take note. Below are just a few common British phrases that you might like to work into your daily vernacular, as they can pepper any conversation with a little extra something. Aggro: Aggressive/in someone’s face.“Are you having a laugh?”: Statement of incredulity, like “you’ve got to be kidding”, and such.

webenglish Related topics: Thanksgiving, Year 3-7 Background Colonization in the New World An informative text for the teacher about the British colonisation of the East Coast.A Clash of Cultures in the New World (14:00) This VOA radio programme clarifies the underlying reasons for the clashes between the settlers and the natives. Very slow speech; would benefit from a different method, e.g. by reading and discussing, if used in class.Native American Houses There is a common misunderstanding that all “Indians” lived in Teepees. 150 Years of The Tube You are going to listen to a radio clip about the London Undergrounddo a comprehension activity Discuss Does your city have a metro or underground railway?