How to Free Yourself From Repressed Emotions 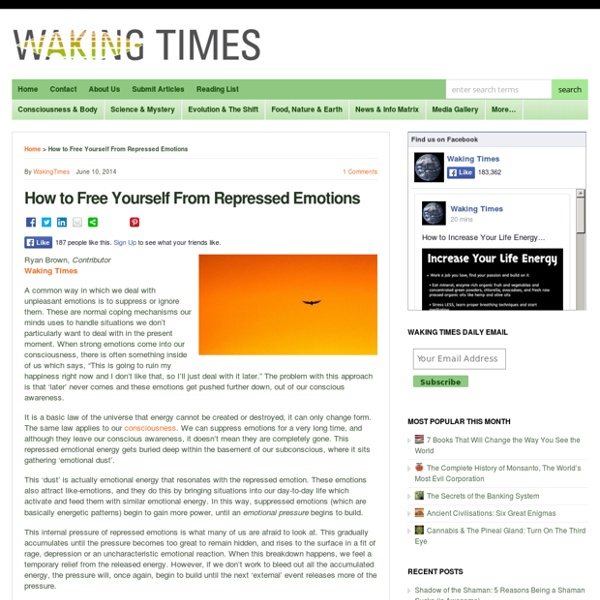 Ryan Brown, ContributorWaking Times A common way in which we deal with unpleasant emotions is to suppress or ignore them. These are normal coping mechanisms our minds uses to handle situations we don’t particularly want to deal with in the present moment. When strong emotions come into our consciousness, there is often something inside of us which says, “This is going to ruin my happiness right now and I don’t like that, so I’ll just deal with it later.” The problem with this approach is that ‘later’ never comes and these emotions get pushed further down, out of our conscious awareness. It is a basic law of the universe that energy cannot be created or destroyed, it can only change form. This ‘dust’ is actually emotional energy that resonates with the repressed emotion. This internal pressure of repressed emotions is what many of us are afraid to look at. When an emotional trauma occurs, there is the choice to either deal with it effectively or to turn away from it. The Good News

10 Ways to Treat Depression Without Antidepressants Sarah Landrum, ContributorWaking Times You’ve probably been told that antidepressants correct the chemical imbalance in your brain. As it turns out, that’s not quite true. In fact, antidepressants might be doing you more harm than good. Even if antidepressants do work, the fact remains that they’re insanely expensive. It’s better to view antidepressants as a last resort, and try some – or all – of these alternative treatments first. 1. When you’re depressed, negative thoughts pour into your mind like water from a broken dam. Nothing – except meditation. “In the group work that I’ve done with sufferers of anxiety or depression, I’ve found (mindfulness meditation) very beneficial because it calms the mind,” says psychologist Katie Sparks. 2. Then again, maybe being an almost-Buddhist isn’t your thing. In that case, try exposing yourself to funny TV shows/movies/books/what-have-yous. 3. Depression is a manipulative and malicious little monster. Don’t listen to it. 4. 5. 6. 7. 8. 9. 10. 1. 2.

Releasing Unexpressed Emotion Randi G. Fine, ContributorWaking Times “Unexpressed emotion will never die. They are buried alive and will come forth later in uglier ways.” ~Sigmund Freud Most of the feelings that interfere with our lives today, our negative emotional responses, have little to do with what is occurring in the present. When these memories are subconsciously triggered, all rationality goes out the window. We may think we know why we are reacting the way we are, though we seldom do. Triggers bring the pain of our past to the surface for a very specific reason. That is not easily accomplished. That lack of understanding is a result of having been conditioned to bury our most uncomfortable feelings – to remain calm and to show our happy face to the world. Our emotions embarrass us. As a result, many of us have been denying our emotional pain for a very long time. The only requirement for existing in the physical world is that we breathe air. Emotion is a natural response to living. About the Author

11 Ways Our Society Treats Us Like Caged Rats: Do Our Addictions Stem from that Trapped Feeling? Charles Eisenstein, The FixWaking Times Instead of a moral failing or physiological malfunction, is addiction an adaptive response to circumstances? You’ve probably heard about those addiction studies with caged lab rats, in which the rats compulsively press the heroin dispensing lever again and again, even to the point of choosing it over food and starving themselves to death. These studies seemed to imply some pretty disheartening things about human nature. The rat addiction studies also seem to validate the main features of the War on Drugs. The implication is that drug addiction is not a moral failing or physiological malfunction, but an adaptive response to circumstances. Are we like rats in cages? Here are some ways to put a human being in a cage: —Remove as much as possible all opportunities for meaningful self-expression and service. —Cut people off from nature and from place. —Move life – especially children’s lives – indoors. The cages suffer no easy escape.

Yoga and Meditation Protect Cancer Survivors at Cellular Level Meditation and yoga are renowned for their ability to help cancer survivors alleviate mental and emotional distress. But now a significant new study has revealed that their benefits go even further into the cellular level: the findings show that yoga, meditation and social support protect the health of breast cancer survivors by helping to maintain telomere length. Telomeres are protective caps of DNA found at the ends of a chromosome. Since they keep the ends of the chromosome from fraying and deteriorating, they are often compared to a plastic tip on a shoelace. For the study, published in the journal Cancer, Alberta researchers discovered that telomere length was strongly preserved in breast cancer survivors who practice meditation and yoga or who participated in social support groups. “It’s important for people dealing with difficult emotions to find a way of processing them in a healthy way. The results are startling.

New Research Reveals the Real Causes of Depression Dr. MercolaWaking Times Depression is thought to affect about one in 10 Americans.1 In 2010, antidepressants were the second most commonly prescribed type of medication in the US,2 hinting at the severity of the problem. Contrary to popular belief, depression is not likely caused by unbalanced brain chemicals; however there are a number of other biological factors that appear to be highly significant. Chronic inflammation is one. As noted in the featured article:3 “George Slavich, a clinical psychologist at the University of California in Los Angeles, has spent years studying depression, and has come to the conclusion that it has as much to do with the body as the mind. Scientists have also found that your mental health can be adversely impacted by factors such as vitamin D deficiency and/or unbalanced gut flora—both of which, incidentally, play a role in keeping inflammation in check, which is really what the remedy to depression is all about. Inflammation and Depression Dr.

Mother Mary and Mary Magdalene via Natalie Glasson: Discussions on Supportive Steps to Dissolve Fear and Illness Mother Mary and Mary Magdalene: Discussions on Supportive Steps to Dissolve Fear and Illness, channeled by Natalie Glasson, October 17, 2014, Mother Mary : It is with the vibration of the 9th Ray of Light that I greet you today, bringing forth the brilliant colors and vibrations of a blue and green light, focused upon soul integration and exploration, as well as the merging of the heavens with the Earth – light with matter. Please allow me to dowse you in the blue and green light, permitting it to seep into your entire being. As the reality of the blue and green light of the 9th Ray surrounds you, let yourself breathe in the healing vibrations, wisdom and transformational shifts that this aspect of the Creator promotes. Soul integration with all aspects of your physical, emotional and mental bodies is essential in all periods of ascension, and yet it is at this stage it is vital. This is not to understand the mystic and sacred abilities individual to you.

Can Ayahuasca Cure PTSD? April M. Short, Reset.meWaking Times Donald “Donnie” Bumanglag spoke with Reset just months after sipping the psychedelic, sacred, traditional healing brew ayahuasca in the Peruvian Amazon. Unlike many of his fellow participants in the week long retreat program, Donnie is a 33-year-old veteran military combat medic and father of four. And, like many veterans, he was on the verge of suicide due to severe PTSD symptoms prior to his visit to the jungle (22 veterans take their own lives in the U.S. each day according to the Department of Veteran’s Affairs). For years, Donnie’s life felt like a trap he couldn’t escape. He grappled with the duality of “not just being the guy that was there to kill everybody, but also being the guy that was there to help people.” “It became very convoluted many, many times,” he said. Today, thanks in great part to stumbling upon a TED Talk about ayahuasca, he is living symptom-free and full of a hopefulness that seeps out in his voice when he speaks. War

My Mantis ET Encounter Part 3 - SOULSALIGHT | SOULSALIGHT My Mantis ET Encounter Part Three: Mantis Name Revealed By Luther Birdmaker, Soulsalight Member If you are living in a dream state, Your identity is fixed for specific reasons And questioning that identity has no purpose Since to play that game - to fulfill; that story - Just is to follow those rules, adopt that identity. But to a being who is awakening, No question is more exciting than, Who am I? Read My Mantis ET Encounter Part 1 & Part 2 By the time the next medicine circle rolled around again in late spring of 2014, I felt ready for it even though I always feel nervous going in. The first appearance of the mantis had corresponded to my kundalini awakening experience six months earlier, when I had come to understand that this being was helping to facilitate this process. I began to feel the most exquisite forces even in my daily life, without the help of powerful plant medicines. On the third day, alone and broken open by the medicine, I went even deeper.

The Vagus Nerve and the Healing Promise of The Sudarshan Kriya Frank Huguenard, Staff WriterWaking Times At the center of our bodies resides a long, sinewy nerve that extends all the way from our medullas down through our chests to beyond our stomachs. This nerve, known as the Vagus Nerve, happens to be at a most fascinating intersection, not only between our two physical nervous systems (our central and autonomic nervous systems) but also between our conscious minds and subconscious minds. Research indicates that a healthy vagus nerve is vital in experiencing empathy and fostering social bonding, and it is crucial to our ability to observe, perceive, and make complex decisions. Scientists have discovered that artificial Vagus Nerve Stimulation (VNS), through electrical impulses via a surgically implanted pacemaker like device, shows promising results in reducing depression, anxieties and even conditions such as epilepsy and obesity. Automated Habit Formation Why Laughter IS the best medicine Scientific Research on Sudarshan Kriya Dr. Dr.

Real talk: I've suffered from depression. Have you? This can help. Ready for some reality? In a place where the “pursuit of happiness” is one of our most inalienable rights, it often feels out of reach to me. This past winter, I had an entire month where I didn't want to do anything. I blamed it on "needing a break," but now that the sun's been out more I've realized the truth. I was depressed. (You may have noticed the lack of emails from me.) More specifically, I was suffering from seasonal affective disorder. At the time, I didn't want to admit anything was wrong with me. In truth, it was my body craving some rather basic nutrients -- primarily vitamin D. I know I'm not alone. The statistics are both alarming and heartbreaking… Depression in its myriad forms has swiftly become the leading cause of disability worldwide. In the United States alone, 1 in 4 adults suffer from a diagnosable mental disorder. But not all is well with our pharmacological approach to mood disorders. Granted, when appropriate, prescription drugs have their place in medicine.

The Depression Sessions: A FREE Online Event from Underground Wellness