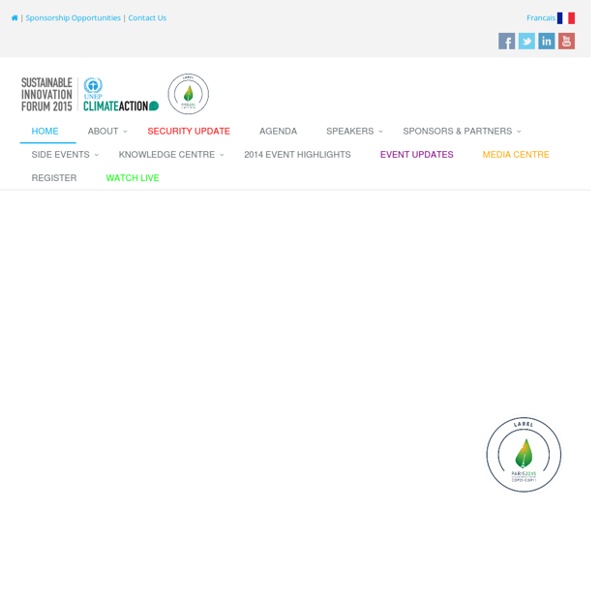 6 big takeaways from the opening of the Paris climate conference PARIS, France — The two-week marathon of boring speeches and wonky side panels intended to save humanity kicked off in Paris on Monday. More than 150 heads of state and representatives of 195 governments arrived at the sprawling conference center in the northeast suburbs of Paris. After being welcomed by U.N. climate chief Christiana Figueres and COP21 President Manuel Pulgar-Vida, the heads of state spoke. They were limited to just a few minutes each, so the speeches were short on surprises, though heavy on the same themes: climate change is dangerous, we need to control it for sake of our children, and so on. Through it all, a few key themes emerged:

Discrete Choice Analysis Sunday, March 20 - Thursday, March 24, 2016 Ecole Polytechnique Fédérale de Lausanne, Lausanne, Switzerland Exceptionally this year, a 10% discount is proposed to all participants. Accurate predictions of the demand and market shares are critical for a wide variety of businesses and public organizations. Examples of applications include: predicting demand for a new product under alternative pricing strategies; designing a business plan for a new technology; analyzing the impact of a merger on market shares; forecasting the ridership on a new metropolitan transit service; and analyzing competitive scenarios for introducing a new telecommunication service. To accomplish these tasks, discrete choice analysis provides powerful methodological tools.

Will Paris Climate Summit Lead to More Money for Scientists or Solyndras? Big news came out of Paris early in the twelve-day Conference Of the Parties (COP21), the global confab on climate. We are going to see if big money can create new science and thus energy “miracles.” Bill Gates has convinced a global conclave of 28 billionaires to pledge support for a new private venture fund, the Breakthrough Energy Coalition (BEC), to invest billions of dollars in “risky” new energy cleantech to try and displace the world’s 90% dependence on hydrocarbons. Prediction: The [Breakthrough Energy Coalition] fund will fail, perhaps spectacularly, if it operates like the multitude of cleantech funds that have been around for more than a decade. Apparently the BEC will, in some form, coordinate with governments in order to commercialize scientific “breakthroughs” expected to emerge from expanded federal research. No surprise, there’s been a broad market retreat from cleantech deals, one based not on politics but on financial performance.

theSkimm's Guide to the Paris Climate Conference You might have heard global warming is a thing. So have world leaders. They're getting together to agree on a plan to do something about it. This meeting is a very long time coming. This month, reps from almost 200 countries are huddling in Paris for the UN's Climate Change Conference. White House Launches American Business Act on Climate Pledge Today at the White House, Secretary of State John Kerry and senior White House officials will host 13 of the largest companies from across the American economy who are standing with the Obama Administration to launch the American Business Act on Climate Pledge: Alcoa, Apple, Bank of America, Berkshire Hathaway Energy, Cargill, Coca-Cola, General Motors, Goldman Sachs, Google, Microsoft, PepsiCo, UPS, and Walmart. The companies making pledges as part of today’s launch represent more than $1.3 trillion in revenue in 2014 and a combined market capitalization of at least $2.5 trillion. The impacts of climate change are already being felt worldwide. Nineteen of the 20 hottest years on record occurred in the past two decades. Countries and communities around the world are already being affected by deeper, more persistent droughts, pounded by more severe weather, inundated by bigger storm surges, and imperiled by more frequent and dangerous wildfires. As President Obama said at the U.N.

Trainings NEWS » “MINERVA” EU-Japan Fellowship Programme Deadline: 15 January 2016Open to: EU and Japanese professional with a proven interest in EU-Japan cooperationFellowship: 1,700 EUR/month Description The EU-Japan Centre for Industrial Cooperation proposes a 6 month in-house fellowship scheme in Japan, designed to support its research and policy analysis of EU-Japan economic and industrial issues. The Research Fellow will undertake research work on a selected priority topic of the Centre, which should result in a consistent policy report (70-100 pages), to be owned by the Centre. COP21 Day One: Mind-blowing...but surprisingly normal Day One of the Paris climate conference was designed for impact. And it worked. Our hosts knew this was going to be a difficult global negotiation, and that we as a world community need to dramatically step up our game to fight climate change. So they jammed the first day with powerful speeches by heads of state from over 140 countries – each of them emphasizing the importance of fighting climate change, talking about impacts and actions in their countries, and exhorting the delegations to reach a strong agreement. At least that was the public message – and it seems to have had the desired effect.

Twitter Creates New Emojis to Mark UN's COP21 Conference Twitter has introduced several new emojis activated by hashtags, in conjunction with the United Nations COP21 climate change summit in Paris. Realizing the impact the high-level talks will have in regard to its platform, Twitter has attached the new emojis — which include an Eiffel Tower embedded in a green leaf (the summit’s official logo), a regular Eiffel Tower icon, and a heart-shaped earth — to the #COP21, #GOCOP21, #ActionDay, and #ClimateChange hashtags, respectively, reports Mashable. The Twitter Government handle sent out a tweet regarding the new emojis, which can be seen below. The two-week COP21 summit is being attended by more than 150 world leaders, among them U.S. International Law Fellowship Programme 2016 Deadline: December 1, 2015Location: Hague, Netherlands.Dates: 27 June – 5 August Description The United Nations International Law Fellowship Programme is organized by the Codification Division of the United Nations Office of Legal Affairs.

Votes in Congress Move to Undercut Climate Pledge This video is not currently supported on your browser. Advertisement Continue reading the main story Video WASHINGTON — Hours after pledged Tuesday in Paris that the United States would be in the vanguard of nations seeking a global response to climate change, Congress approved two measures aimed at undercutting him. Most Americans Want A Global Agreement On Climate As Republican leaders herald Congress’ power to hinder a global climate deal, most Americans say the U.S. should join an international treaty requiring America to reduce emissions, according to a new poll. The New York Times and CBS poll released Monday also notes that 63 percent of Americans favor limits on carbon emissions. The poll comes as delegates from nearly 200 countries are meeting in Paris in hopes of negotiating a climate deal that puts the world on a track to limit global warming to no more than 2°C. Many scientists believe that global warming would be irreversible and cause catastrophic effects beyond this threshold.

Are the COP21 corporate sponsors as green as they say they are? Some corporate sponsors of the COP21 Paris climate talks are failing to properly report their greenhouse gas (GHG) emissions, a new report reveals. The Paris climate conference is sponsored by over 60 companies including big polluters EDF, Engie and BNP Paribas. And while countries continue to negotiate a deal on tackling climate change, what have these corporate sponsors brought to the table? A new study published this week by French social research group BASIC and the Multinationals Observatory shows that very few of the COP21 sponsors are declaring their GHG emissions in a transparent way. The report looked at the GHG emission reduction policies of ten COP21 sponsors: Accor, BNP Paribas, Carrefour, EDF, Engie, Kering, LVMH, L’Oréal, Micheline and Renault. Of these, only one company – EDF – has actually reduced its overall carbon footprint in line with EU targets.