Socialcam: The easiest way to share video with friends 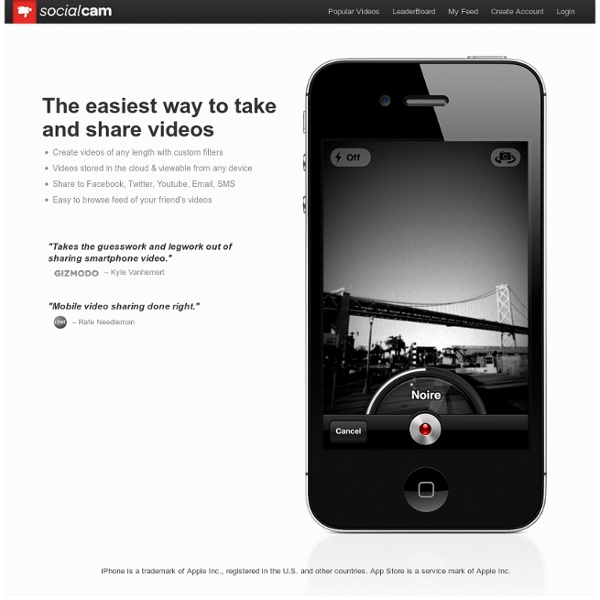 Feedly The newest release of the Feedly reader version may be one of the essential reading applications you can have for any of your devices. It is the power reader's reader and available today on any Android or iOS device you can find. Feedly has been around for a while. As a browser extension to Chrome and Firefox, Feedly has been taking RSS feeds and Google Reader and turning them into a smart magazine start page since 2008. Feedly is not a social magazine for tablets the way Flipboard or Zite are. The layout of the app is simple. In terms of user interface, Feedly for the iPad (where we tested it) has two choices - white background, black text or black background, white text. Feedly is not going to run into any problems with publishers, the way Zite has. Feedly may not be the most innovative or dynamic magazine application on the market.

My New Favorite iPhone App for Music: Hype Machine Radio The hardest part of finding good music online these days is discovering what you should look for in the first place. Almost all our old favorites are available on demand but finding good new bands and songs remains a challenge. Various services are competing to fill this need as effectively as possible, but it's a tough nut to crack. My new favorite entrant into the field is an iPhone app from long-time MP3 blog aggregator Hype Machine. Hype Machine Radio is being sold for $2.99 (iTunes) and is worth every penny. I've been using the app to discover new music with the help of dedicated music bloggers, then listening to the full albums of the artists I like on Rdio. Some music services surface new music using an algorithm, but I find that all the songs then sound the same and just become background noise. Hype Machine tracks hundreds of blogs and I do wish the app helped me discover new ones better from the big list of options it offers.

Should Google and Facebook Be Filtering Our Content For Us? Is the personalization of the Internet a step backwards? Is the wealth of information that is accessible to us being reduced because the products we use are filtering it all so heavily? This is a discussion that has been gaining momentum in recent weeks. Do you want your search results and news tailored to your tastes, or do you want more control? Let us know in the comments. The topic was brought up most recently by alternative search engine DuckDuckGo, which calls out the major search engines for being too heavy on the content filtering. When you search the Internet, search engines now show different results to different people. In other words, you are living in a Filter Bubble that promotes things it thinks you’ll like, and demotes (effectively filters) out some of the rest, which may limit your exposure to opposing information. Then it turns into an ad for DuckDuckGo: Founder Gabriel Weinberg discussed these differences with WebProNews in an interview earlier this year:

Releases May 2012 U.S. Online Video Rankings June 18, 2012 comScore Releases May 2012 U.S. Online Video Rankings Number of Video Ad Views Surpasses 10 Billion for First Time on Record RESTON, VA, June 18, 2012 – comScore, Inc. (NASDAQ: SCOR), a leader in measuring the digital world, today released data from the comScore Video Metrix service showing that more than 180 million U.S. Top 10 Video Content Properties by Unique ViewersGoogle Sites, driven primarily by video viewing at YouTube.com, ranked as the top online video content property in May with 151.7 million unique viewers, followed by Yahoo! *A video is defined as any streamed segment of audiovisual content, including both progressive downloads and live streams. Top 10 Video Ad Properties by Video Ads ViewedAmericans viewed an all-time high of 10 billion video ads in May. *Video ads include streaming-video advertising only and do not include other types of video monetization, such as overlays, branded players, matching banner ads, etc. 84.5 percent of the U.S.

Taptu delivers the news. A lot. Taptu is another entry into the magazine-style social news reader apps available for the iPad, and while it does present itself in a unique way as compared to similar apps, it just doesn’t offer a compelling enough reason for many to switch from, say Flipboard, Pulse or even stray too far another new entry in the space, News.me (although the last example isn’t free, whereas the others are). But if you’re really, really into news…then Taptu might be just the app you’re looking for. The app allows users to find and select for news stream from what they call a StreamStore. From there, you can also add RSS feeds. While the sleek design lends itself well to this type of app, it can get very cluttered , especially if you add in social networking streams such as Facebook and Twitter (which is an option that Taptu offers users as well). Taptu also serves up recommendations based on what users read within the app, based both on topic and source. Taptu is available for free in The App Store.

How the World Uses Social Networks [INFOGRAPHIC] Social networks in every country might live on the same Internet, but that doesn't prevent differences in online customs and culture from developing along geographic borders. Ongoing market research service Global Web Index has mapped these differences in the infographic above (click it to enlarge). The research, run by London-based consultancy Trendstream, has conducted six waves of surveys about global consumer adoption of the Internet and social media in 36 markets. It used data from its February 2011 surveys of between 750 and 2,000 online users in each market to define three behavior types: messagers, groupers and content sharers. In some countries, many of them Asian, most people were focused on content sharing. Others, like the UK and Canada, had more people who put a greater emphasis on sending messages. Trendstream also used data from the survey to map social network penetration in each country that it surveyed. Does the way any country uses social networks surprise you?

Social Photo Aggregator Pixable Raises $3.6 Million Pixable, a startup that develops sleek social photo creation and categorization tools, has raised $3.6 million in Series B funding led by Menlo Ventures. This brings Pixable’s total funding to $6.6 million. Founded by 3 MIT graduate students, Pixable’s service allows people to use of all their Facebook and image sharing site photo content like captions, tagging information, comments, and birthdays to make albums, slideshows, calendars and nor artwork. Pixable’s browser-based simplifies the creation of albums, making it easy to use for anyone. One of Pixable’s early applications was a nifty tool that allows you to make mosaics of your Facebook photos. Since then, the startup launched Photofeed, a Facebook app and companion iPad app which will intelligently sort and categorize your friends’ Facebook, Instagram and Flickr photos.

The Boundless Library: Explore the New York Public Library Collections on Your iPad Yesterday Seth Godin posted an essay on his blog about "The Future of the Library," a call-to-arms for librarians to envision their work less as a defender of a "warehouse for dead books" but as as a "producer, concierge, connector, teacher and impresario." To paraphrase the response of librarians on blogs and on Twitter: "Yes, we know." and "Yes, that's what we do." One example of this "future of the library" that is indeed here now: the newly released New York Public Library app, available today via iTunes: Biblion: The Boundless Library. The app is a re-launch of the library's Biblion journal, but in a format specifically designed for the tablet. The first issue of Biblion launched today features items from the library's collection from the 1939-1940 New York World's Fair -- documents, images, essays, film and audio that let you explore the library's stacks "opening up hidden parts of the collections and the myriad story lines they hold and preserve."

Larry Chase 100712: Socialcam is like Instagram for videos. gives multiple opportunities to increase reach and exposure for videos shot oniPhone or Android phone, both on the Socialcam site and on Facebook, with which Socialcam is tightly integrated.
First, there's the Socialcam site itself, where you upload your videos from your phone. Your goals here are to generate lots of "likes" and to get viewers to follow you, like subscribing to a YouTube channel. The site tracks popularity two ways: videos with the most "likes" and users with the most followers.
Then, every time Socialcam users view your videos or follow your account, those actions will show up in their Socialcam newsfeeds. If those users also link their Fb and Socialcam accounts together, those actions also show up in their Fb newsfeeds, with links back to your videos.
Finally, when you link your complimentary Socialcam account to Fb account, your fans get links in their newsfeed everytime you upload new vid. by vr..oem Jul 10