DNA Hard Drive Could Store Data For Millions Of Years 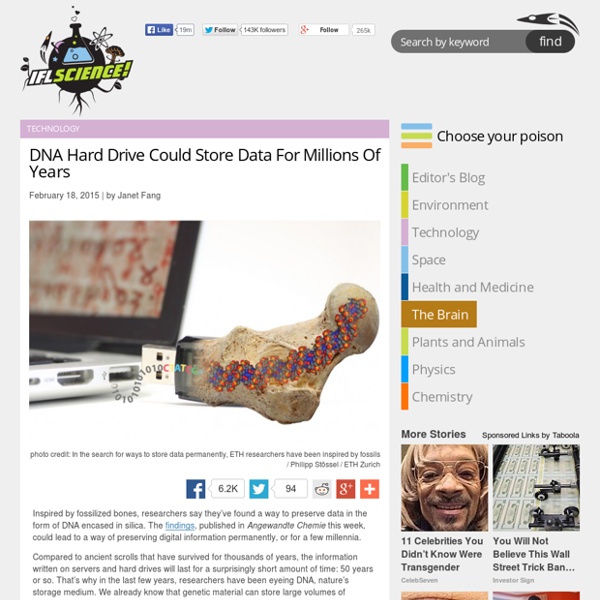 Inspired by fossilized bones, researchers say they’ve found a way to preserve data in the form of DNA encased in silica. The findings, published in Angewandte Chemie this week, could lead to a way of preserving digital information permanently, or for a few millennia. Compared to ancient scrolls that have survived for thousands of years, the information written on servers and hard drives will last for a surprisingly short amount of time: 50 years or so. That’s why in the last few years, researchers have been eyeing DNA, nature’s storage medium. We already know that genetic material can store large volumes of information in a compact way, but attempts thus far have been thwarted by chemical degradation and mistakes in sequencing, resulting in errors and gaps in the encoded data once its retrieved. The latest development in long-term, error-free DNA storage comes from an ETH Zurich team led by Robert Grass. Read this next: Could Life On Earth Have Thrived 3.2 Billion Years Ago? Related:  Emerging Technologies • InfoTech Advances

Scientists Create New Invisible Material Bioengineers Build Circuit Board Modeled On The Human Brain Stanford scientists have generated a hardware system based on the human brain that is capable of simulating, in real-time, a million neurons with billions of synaptic connections using only a similar amount of power to what is required to run a tablet computer. The results have been published in Proceedings of the IEEE. Generating models that can simulate brain activity is tricky business. Personal computer simulations of the cortex of a mouse are approximately 9,000 times slower than the real thing and consume around 40,000 times more power. The Human Brain Project desires to simulate a human-scale cortex, but as it stands it’s predicted to require around as much power as 250,000 households! In this study scientists generated system that they are calling Neurogrid, which is comprised of 16 “Neurocore” chips integrated together on a circuit board. Unfortunately a drawback at the moment is the high costs involved in development; each Neurogrid costs around $40,000.

Scientists discover whole new state of matter Most people are familiar with some of the common states of matter: solids, liquids and gases. Scientists also recognize a fourth state of matter — plasma — that is commonly observable here on Earth, as well as a host of other states that can only be created in the lab, such as Bose–Einstein condensates and neutron-degenerate matter. Jahn-Teller metals can now be added to this list, a state which appears to have the properties of an insulator, superconductor, metal and magnet all wrapped into one. It's the material's superconductivity which might be the most interesting trait, however. A team led by chemist Kosmas Prassides from Tokohu University in Japan produced the new state of matter by introducing rubidium into carbon-60 molecules — more commonly known as "buckyballs" — which altered the distance between molecules. What the researchers observed, however, was that when an insulator becomes a metal, there is a transitional phase where the molecules hang on to their old shapes.

Stanford engineers invent radical ‘high-rise’ 3D chips A four-layer prototype high-rise chip built by Stanford engineers. The bottom and top layers are logic transistors. Sandwiched between them are two layers of memory. The vertical tubes are nanoscale electronic “elevators” that connect logic and memory, allowing them to work together efficiently. (Credit: Max Shulaker, Stanford) Stanford engineers have build 3D “high-rise” chips that could leapfrog the performance of the single-story logic and memory chips on today’s circuit cards, which are subject to frequent traffic jams between logic and memory. The Stanford approach would attempt to end these jams by building layers of logic atop layers of memory to create a tightly interconnected high-rise chip. The work is led by Subhasish Mitra, a Stanford associate professor of electrical engineering and of computer science, and H. “This research is at an early stage, but our design and fabrication techniques are scalable,” Mitra said. Overcoming silicon heat RRAM memory Interconnected layers

IBM Develops a New Chip That Functions Like a Brain - NYTimes.com Photo Inspired by the architecture of the brain, scientists have developed a new kind of computer chip that uses no more power than a hearing aid and may eventually excel at calculations that stump today’s supercomputers. The chip, or processor, is named TrueNorth and was developed by researchers at IBM and detailed in an article published on Thursday in the journal Science. It tries to mimic the way brains recognize patterns, relying on densely interconnected webs of transistors similar to the brain’s neural networks. The chip’s electronic “neurons” are able to signal others when a type of data — light, for example — passes a certain threshold. The processor may thus be able to recognize that a woman in a video is picking up a purse, or control a robot that is reaching into a pocket and pulling out a quarter. The chip contains 5.4 billion transistors, yet draws just 70 milliwatts of power. The TrueNorth has one million “neurons,” about as complex as the brain of a bee. The first, Dr.

Scientists transform cement into liquid metal It's not the same as turning lead into gold, but scientists at the Illinois-based Argonne National Laboratory and the Japan Synchrotron Radiation Research Institute/SPring-8 have developed a method for turning cement into a liquid metal semiconductor. The process sounds like a mad scientist's invention. It involves equipment like an aerodynamic levitator and a carbon dioxide laser beam. The material in question is mayenite, a calcium aluminum oxide material that is part of alimuna cement. "This new material has lots of applications, including as thin-film resistors used in liquid-crystal displays, basically the flat panel computer monitor that you are probably reading this from at the moment," Argonne physicist Chris Benmore said Monday in a statement. The results is being published under the title "Network topology for the formation of solvated electrons in binary CaO-Al2O3 composition glasses" in the Proceedings of the National Academy of Sciences journal. Score one for modern alchemy.

A New Circuit Board Mimics Billions of Brain Synapses at Once The human brain is a pretty sweet organ to have working for us. It's fun to think that, as we push harder and harder into the computing future, we just have this biological thing as a default: the fastest processor(s), the most intelligent AI, and I/O capabilities to put your Oculus Rift to shame and really any future Oculus Rift as well. And it was free! OK, sort of free, anyhow: the upkeep can be intense, and if you have to send it in for repairs, well, good luck. Scientists and computer engineers recognized a long time ago that successfully emulating the brain would win computing. To put the relative limits of technological computing into perspective, consider that the cortex of a mere mouse brain operates 9,000 times faster than the fastest computer simulation of that cortex. The board, the product of a team based at Stanford University, consists of 16 custom-designed "Neurocore" chips combined into one board about the size of an iPad known as the Neurogrid.

Brain-inspired chip fits 1m 'neurons' on postage stamp 8 August 2014Last updated at 03:40 ET By Jonathan Webb Science reporter, BBC News The chips can also be connected together to provide even more computational power Scientists have produced a new computer chip that mimics the organisation of the brain, and squeezed in one million computational units called "neurons". They describe it as a supercomputer the size of a postage stamp. Each neuron on the chip connects to 256 others, and together they can pick out the key features in a visual scene in real time, using very little power. The design is the result of a long-running collaboration, led by IBM, and is published in the journal Science. "The cumulative total is over 200 person-years of work," said Dr Dharmendra Modha, the publication's senior author. He told BBC News the processor was "a new machine for a new era". Next generation Continue reading the main story “Start Quote Google Images... does a marvellous job of recognising pictures of cats - but it is using large arrays of computers”

Google has developed a technology to tell whether 'facts' on the Internet are true - Futurism | Futurism Synopsis A team of computer scientists at Google has proposed a way to rank search results not by how popular Web pages are, but by their factual accuracy. Summary Basically, to evaluate a stated fact, you only need two things: the fact and a reference work to compare it to.