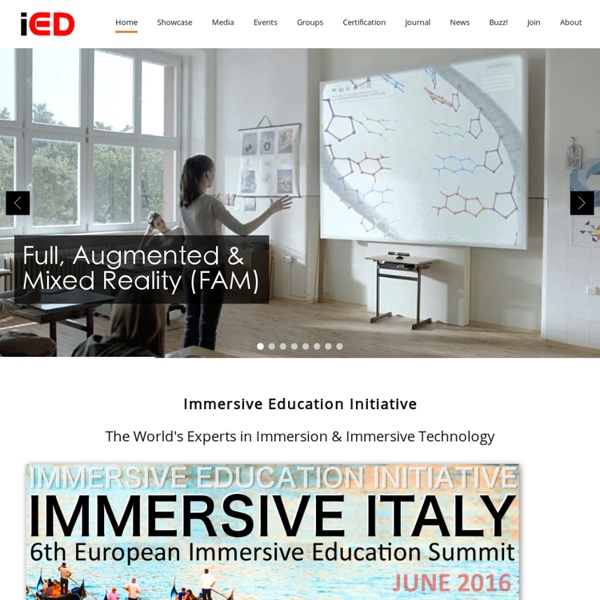 Immersive Technologies and the Future of Education This week’s midweek post introduces this potential player in the technological future of education. I was quite intriqued by this article in the latest (Sept 2009) Campus Technology magazine, titled “Best of Both Worlds”. This article discusses the use of Immersive Technologies in Education. Immersive Technologies include things like simulations, virtual reality, and augmented reality (Second Life and many gaming systems incorporate immersive technologies). Meet Dr. Robot - Health Checkup: Robotics If your idea of surgery comes mainly from TV-doctor dramas, you'll find this operating suite at the Henry Ford Hospital in Detroit a bit disorienting. There's a major surgery in progress — that's what they tell you, anyway — but you can't see a patient. For that matter, you can't see the surgeon.

Microsoft has patent ambitions for immersive gaming (Phys.org)—Microsoft knows how to play games. They have proven themselves worthy of growing a customer base of gaming enthusiasts with their Xbox and Kinect. Now Microsoft watchers are talking about the company's recent filing of a patent that takes the Microsoft vision of gaming to the all-pervasive level. Patently Apple has posted details about a Microsoft patent recently published by the US Trademark and Patent Office. The patent shows Microsoft has ambitions to transform entire rooms into game environments. The patent shows plans for game-playing in immersive display settings where users get to work with images projected onto realtime surfaces of their room.

MIT's Sherry Turkle on Technology and Real-World Communication Digital communication is so pervasive that most of us don't even bother to question its role in society. That's not the case with Sherry Turkle, who has tracked the way we interact with computers and artificial intelligence since the 1970s. Founder and director of the MIT Initiative on Technology and Self, Turkle has written a new book, Alone Together: Why We Expect More from Technology and Less from Each Other, that asks a simple question: Do digital methods of communication connect us the way interaction in the real world does? In late December, Turkle sat with TIME to discuss robot puppies, teen texting and what "full attention" means in an age of smart phones. Alone Together concludes a trilogy of books that started with your exploration of the very first computer programs.

The Storyteller’s Guide to the Virtual Reality Audience Thank You The extended team: Paisley Smith, Judeth Oden Choi, Alexandra Garcia, Amy Santamaria, Joseph Lim, Maya Hawke and Emily Goligoski. As well as the test participants & actors. iED Europe Summit 2012 KEYNOTE: Prof. Chris Fowler, University of the West Indies Immersive Education Europe announced that Chris Fowler, Professor in the School of Education at the University of the West Indies, will be keynote at the 2nd European Immersive Education (iED) Summit on November this year. Prof. Chris Fowler, amongst other things, is responsible for the development and implementation of the Blended Learning Policy at the University of the West Indies. His first degree and doctorate are in Psychology. Before joining UWI in Oct 2010, he was Professor and Coordinator for Research & Evaluation at the Institute of Distance Education, University of Swaziland. Between 2002 and 2009 he was the Professor and Director of Chimera, the Institute of Social and Technical Research at the University of Essex.

Singularity: Kurzweil on 2045, When Humans, Machines Merge On Feb. 15, 1965, a diffident but self-possessed high school student named Raymond Kurzweil appeared as a guest on a game show called I've Got a Secret. He was introduced by the host, Steve Allen, then he played a short musical composition on a piano. The idea was that Kurzweil was hiding an unusual fact and the panelists — they included a comedian and a former Miss America — had to guess what it was. On the show (see the clip on YouTube), the beauty queen did a good job of grilling Kurzweil, but the comedian got the win: the music was composed by a computer. Kurzweil got $200. Kurzweil then demonstrated the computer, which he built himself — a desk-size affair with loudly clacking relays, hooked up to a typewriter.

Learning level This article or section is incomplete and its contents need further attention. Some sections may be missing, some information may be wrong, spelling and grammar may have to be improved etc. Use your judgment! 1 Definition