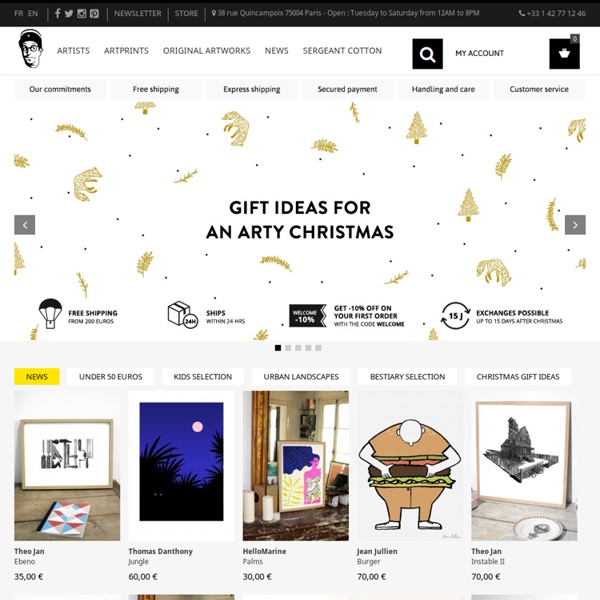 Cooking strainers - portrait shadow art Cooking strainers are usually used to strain liquids off food products. It’s usually something we don’t take much notice of. Artist Isaac Cordal adds another purpose to strainers through his urban installation called Cement Bleak. He molds faces into the grids of colanders and places them by the sidewalk where shadows of the molded faces are projected. His plan is to try to make larger projection drawings using public light resources. Steve Simpson's Illustration Portfolio For a while, as a kid I was fascinated by sign language and spent hours learning it with a friend. To us, it was a secret language only we could understand. I think my best illustrations always have a element of the unpredictable about them, a serendipitous input. Something that wouldn’t normally be associated with the subject.

STANDARD BAGGU - BAGGU We'd love to hear from you! If you are checking on the status of a pending order, please include your order number and the email address entered during check out. EmailGeneral information: info@baggu.com Web order questions: info@baggu.com Brooklyn Store: store@baggu.com Press inquires: press@baggu.com PhoneMonday- Friday, 10AM- 6PM EST: 800 605 0759 MailBAGGU OfficeAttn: Customer Service242 Wythe Ave. No. 6Brooklyn, NY 11249US Amazing Water Drawings with Ink To mark “World Water Day” (March 22nd), Solidarites International has launched an ad campaign to raise awareness about contaminated water that kills so many people in the world. It is a video developed by agency BDDP Unlimited, produced by Hush, and directed by Clement Beauvais. Official notes about the project: [...] Today, it is estimated that 3.6 million people, including 1.5 million children under the age of 5, die every year of diseases borne by unhealthy water, making it the world’s leading cause of death.Yet the public isn’t aware of it and political leaders do not demonstrate the drive it takes to end the terrible deaths. Link via iGNANT

Michał Dziekan Illustrator and character designer Michal Dziekan was born and raised in small town in south-western Poland. He moved to city Wroclaw where he attended Architecture on University of Technology. After three years he left school and moved to Warsaw to work in post production studio Platige Image as a concept artist and matte painter. He stayed in Platige Image from 2007 to 2011, where working on animated commercials and films he got opportunity to gain experience in such fields as vfx compositing, motion graphics animation, animation direction and directing. During that time he was developing as an illustrator and character designer. Invisible Creature: Work Xbox One Viking monsters, space creatures, rabid animals & more. New work for Xbox One. A New Mark Redesigned for a new era, our mummy icon gets a facelift.

SimonLandrein Oh le beau glaivio. Fais au crayon bois. Last extremely short animation I did. Thanks to Mcbaise for the song. Shop Home Shop Delphi Ring by Moving Mountains Tripoli Earrings by Moving Mountains Only Love Is Real Ring by All For the Mountain Baskets Throw by Rachel Domm 2x Iridescent Bowls by Assembly Steve Smith I don’t know what’s the deal with these hyperrealist artists, once again, great work, but absolutely no information…so I’ll just tell you to look at Steve Smith’s pretty paintings, who apparently dreams of sunny days, holidays and sunglasses. Can’t say I blame him! Watercolour paintings by Marilyn Manson NOTE: The following text begins with his first exhibit in 2002 which also has its own page. For anyone who wants a quick listing of Manson's artshows and exhibits, I've made a page here: Art show listing for Marilyn Manson Writer, rocker, singer, photographer, director, composer and now a watercolourist with a debut exhibition - this man's a busy bee. Most of the paintings shown just below were on display at Marilyn's Golden Age of Grotesque Art Show - held Thursday 19 to Saturday 21 September 2002 in Los Angeles, USA. The show took its title from the work-in-progress GAOG album and era.

OBI Scrapbook Blog 199 result(s) for Encyclopedia higher resolution Persian art: printed fabric. From Galería del arte decorativo (Gallery of Decorative Art) vol. 2, collective work, Barcelona, 1890. (Source: Universitat Autonoma de Barcelona) Satirical Art Drawings by Pawel Kuczynski Fun Pic, Pop Culture — By Dave on 2011/02/28 1:48 PM These beautiful works of art are from Polish artist Pawel Kuczynski. Pawel was born in 1976 in Szczecin. Gorgeous Bird Paintings by Adam S. Doyle Artist Adam S. Doyle who recently relocated to Hong Kong creates beautiful gestural paintings of birds, where the seemingly incomplete brushstrokes form the feathers and other details of the animal. In some strange way it reminds me of the story of the Renaissance painter Giotto who is rumored to have been able to draw a perfect circle without the aid of a compass, as if Doyle just picks up a dripping paint brush and in a few seconds paints a perfect bird. In reality his work demonstrates a profound control of the paintbrush and careful understanding of the mediums he works with.