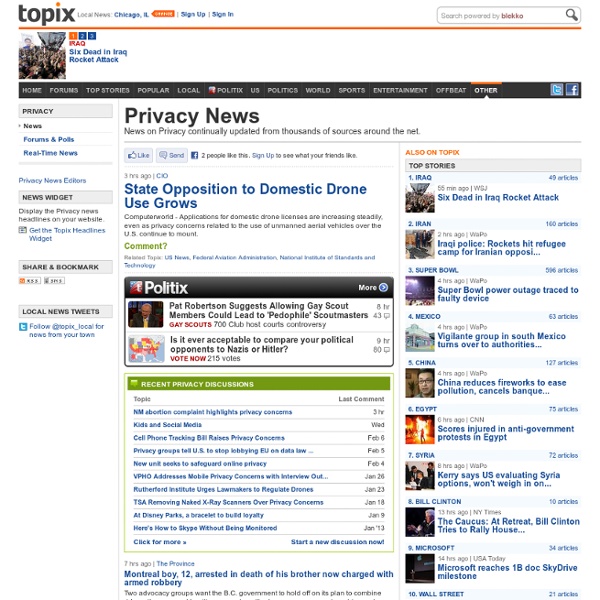 12 min ago | ChinaTechNews.com Alibaba Throws Money At Internet Privacy Hu Xiaoming, Alibaba's vice president for small- and micro-financial group and chief risk officer, announced in Beijing that the company will invest CNY40 million to establish a security fund. Trending on the Topix Network 12 min ago | ComputerWorld Dropbox angling for larger corporate share Dropbox on Tuesday unveiled a new version of its data storage and sharing service for business claimed to provide IT administrators with more control by separating work and personal files. 3 hrs ago | ComputerWorld Data breaches nail more U.S. More U.S. 3 hrs ago | MediaPost Users Trust Online Retailers With Data Privacy, Less Confidence With Advertisers, Marketers Online auctions, banking, social networks, and competitions are taking the brunt of the burden when it comes to data protection. 3 hrs ago | JD Supra Balancing the data privacy debate: The benefits of big (and little) data 7 hrs ago | ComputerWorld 7 hrs ago | Mashable

The future of Singapore's Geekdom News 27, Aug 2012 Exactly one month later, the geeks responded. According to different estimates, GeekcampSG 2012, which happened on August 18, saw between 400 to 500 attendees, and is Singapore’s largest GeekcampSG yet. Covering topics from security to continuous integration to graph databases, this year’s GeekcampSG saw various community leaders, including Michael Cheng, Calvin Cheng, and Subh come in and give talks on topics that they were passionate about. With around 20 percent of the attendees being students, the future sure looks bright for Singapore’s tech ecosystem. So, what did this year’s GeekcampSG have to show about the future of the tech ecosystem in Singapore?

Data privacy: What your zip code reveals about you - Apr. 18, 2013 All that is needed to match the information data brokers compile with what you buy is your full name — obtained when you swipe a credit card — and a zip code, according to data privacy experts. NEW YORK (CNNMoney) That five-digit zip code is one of the key items data brokers use to link a wealth of public records to what you buy. They can figure out whether you're getting married (or divorced), selling your home, smoke cigarettes, sending a kid off to college or about to have one. Such information is the cornerstone of a multi-billion dollar industry that enables retailers to target consumers with advertising and coupons. Acxiom, one of the biggest data brokers in the business, claims to have a database that holds information -- including one's age, marital status, education level, political leanings, hobbies and income level -- on 190 million individuals. Related: Your phone company is selling your personal data Buying a bunch of maternity clothes? Related: What type of consumer are you?

PRISM Lessons On Privacy, Cloud and US IT Compa... Online Voting and Hostile Deployment Environments | Technology, Thoughts, and Trinkets Elections Canada recently stated that sometime after 2013 it intends to trial online voting, a system that lets citizens vote over the Internet. Fortunately, they are just committing to a trial but if the trial is conducted improperly then Elections Canada, politicians, and the Canadian public may mistakenly come to think that online voting is secure. Worse, they might see it as a valid ‘complement’ to traditional voting processes. If Canadians en masse vote using the Internet, with all of its existing and persistent infrastructural and security deficiencies, then the election is simply begging to be stolen. While quick comparisons between the United States’ electronic voting system and the to-be-trialed Canadian online voting system would be easy to make, I want to focus exclusively on the Canadian proposition. Why Online Voting? In the aftermath of the election, Elections Canada prepared a report about the election and presented it to the Speaker. Hostile Deployment Environments

How Privacy is Lost April 28th, 2013 at 17:45 UTC by Ross Anderson On Friday I went to a fascinating lobbying meeting on the new EU data protection regulation. Europe is by default the world’s privacy regulator, as America doesn’t care and no-one else is big enough to matter; so this is really important. Some 3000 amendments have been proposed and the regulation is in the final stages of the committee process; the rapporteurs of the various parties are negotiating compromise amendments which should be ready for a vote within weeks. So the pressure is really on. Friday was extraordinary because all the lobbyists came together in one room to argue their cases. I am posting my notes of the meeting here, as it’s a good case history of how lobbying works, as well as of how our privacy is being lost. Sarah Ludford DPR meeting, 3–6 PM, 26/4/13, Europa House, Smith Square. Sarah says the shadows’ meeting has not so far gone through the articles in order but cherry-picked; started with articles 2, 3, 81, 83. 1. ..

US and UK spy agencies defeat privacy and security on the internet | World news US and British intelligence agencies have successfully cracked much of the online encryption relied upon by hundreds of millions of people to protect the privacy of their personal data, online transactions and emails, according to top-secret documents revealed by former contractor Edward Snowden. The files show that the National Security Agency and its UK counterpart GCHQ have broadly compromised the guarantees that internet companies have given consumers to reassure them that their communications, online banking and medical records would be indecipherable to criminals or governments. The agencies, the documents reveal, have adopted a battery of methods in their systematic and ongoing assault on what they see as one of the biggest threats to their ability to access huge swathes of internet traffic – "the use of ubiquitous encryption across the internet". But security experts accused them of attacking the internet itself and the privacy of all users.

Why George Orwell is as relevant today as ever | Geoffrey Wheatcroft Why Orwell Matters is the title of a book published some years ago by my much-lamented if misguided friend Christopher Hitchens. Whether Orwell matters, he clearly still fascinates, stimulates and enrages. How is it that a writer who died in 1950, at only 46, should be one of the most controversial figures of our own time? During the war he spent some years working for the BBC ("wasting my own time and the public's money", as he characteristically said), and the George Orwell Memorial Trust has proposed that a statue of perhaps the most famous employee in the corporation's history should be put up outside its new HQ. If Thompson thinks Orwell automatically counts as "leftwing" then he hasn't been following the story closely. Even to those of us who reckon ourselves Orwellians he remains a mystery. When Bakewell calls him "the greatest British journalist of his day" it's something of a commonplace, but he was sometimes rather a bad journalist.

where “nothing to hide” fails as logic Every April, I try to wade through mounds of paperwork to file my taxes. Like most Americans, I’m trying to follow the law and pay all of the taxes that I owe without getting screwed in the process. I try and make sure that every donation I made is backed by proof, every deduction is backed by logic and documentation that I’ll be able to make sense of three to seven years later. Because, like many Americans, I completely and utterly dread the idea of being audited. Sadly, I’m getting to experience this right now as Massachusetts refuses to believe that I moved to New York mid-last-year. The frameworks of “innocent until proven guilty” and “guilty beyond a reasonable doubt” are really really important to civil liberties, even if they mean that some criminals get away. It’s disturbing to me how often I watch as someone’s likeness is constructed in ways that contorts the image of who they are. Of course, it’s not just one’s own actions that can be used against one’s likeness.

Why we should still be worried about what Google said regarding Gmail privacy Last week a furore erupted over a statement Google made about privacy - it was widely, and incorrectly, interpreted as having said that Gmail users could have no legitimate expectation of privacy. Google was then widely re-interpreted, correctly, as not having said that. So what happened, what did it say, and now that the mistake has been corrected is everything rosy in the garden? On 12 August, Consumer Watchdog issued a press release warning Gmail users who care about privacy to ditch the service. It issued its advice in response to a recently issued legal brief from Google that, in Consumer Watchdog's eyes, showed the search giant admitting that it doesn't care about people's privacy. At the root of their concern was some text taken from a motion to dismiss issued by Google in June in response to a class action lawsuit. The text taken from the motion to dismiss reads as follows (my emphasis): The words of Consumer Watchdog’s Privacy Project director, John M. Well no, I don't think it is.

Windows 8 privacy complaint misses the Windows 8 contains a significant privacy flaw, insecurely telling Microsoft about every program you run, according to student and developer Nadim Kobeissi whose assessment fails to grasp some key technical details. Kobeissi, who has made a name for himself with his controversial browser-based secure chat service Cryptocat, says that the flaw lies in Windows 8's SmartScreen feature. The first time you run any downloaded executable on Windows 8, the operating system sends information about that application to Microsoft. Kebeissi says that this information is sufficient to identify the application you're running, and that Microsoft could combine this with IP address information to know who was running what. Further, Kobeissi says that the server Microsoft sends the information to supports the SSLv2 protocol, which is known to be insecure. Microsoft's SmartScreen service was first introduced in Internet Explorer 8, as an extension of Internet Explorer 7's phishing filter.

Text of H.R. 6416, American Traveller Dignity Act of 2010 A BILL To ensure that certain Federal employees cannot hide behind immunity.Be it enacted by the Senate and House of Representatives of the United States of America in Congress assembled,SECTION 1. SHORT TITLE. This Act may be cited as the ‘‘American Traveller Dignity Act of 2010’’.SEC. 2. NO IMMUNITY FOR CERTAIN AIRPORT SCREENING METHODS. No law of the United States shall be construed to confer any immunity for a Federal employee or agency or any individual or entity that receives Federal funds, who subjects an individual to any physical contact (including contact with any clothing the individual is wearing), x-rays, or millimeter waves, or aids in the creation of or views a representation of any part of a individual’s body covered by clothing as a condition for such individual to be in an airport or to fly in an aircraft. The preceding sentence shall apply even if the individual or the individual’s parent, guardian, or any other individual gives consent.

NSA analysts knowingly broke surveillance rules The National Security Agency acknowledged Friday that some of its analysts knowingly violated the agency’s rules, after the incidents were included in an inspector general report. "Over the past decade, very rare instances of willful violations of NSA’s authorities have been found, but none under FISA or the Patriot Act,” the NSA said in a statement. “NSA takes very seriously allegations of misconduct, and cooperates fully with any investigations – responding as appropriate. “NSA has zero tolerance for willful violations of the agency’s authorities,” the statement said. Bloomberg News reported earlier that a new report by the agency’s inspector general found several cases over the past decade where people deliberately violated internal rules when it came to conducting surveillance. It’s the latest in a stream of black eyes for the agency. Medine said that the NSA, which oversees most surveillance programs, has not updated its guidelines since 1993.