Top 50 Hacking Tools That You Must Have 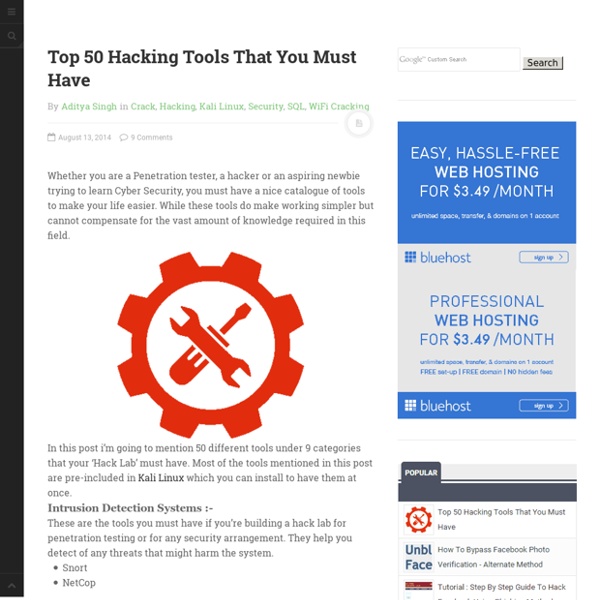 Whether you are a Penetration tester, a hacker or an aspiring newbie trying to learn Cyber Security, you must have a nice catalogue of tools to make your life easier. While these tools do make working simpler but cannot compensate for the vast amount of knowledge required in this field. In this post i’m going to mention 50 different tools under 9 categories that your ‘Hack Lab’ must have. Most of the tools mentioned in this post are pre-included in Kali Linux which you can install to have them at once. Intrusion Detection Systems :- These are the tools you must have if you’re building a hack lab for penetration testing or for any security arrangement. SnortNetCop Encryption Tools :- While the above tools do identify any suspicious activity but they can’t protect your data, you need encryption tools for that. TrueCrypt (The project has been shut down and no longer supported)OpenSSHPuttyOpenSSLTorOpenVPNStunnelKeePass Port Scanners :- NmapSuperscanAngry IP Scanner Packet Sniffers :- Enjoy..!!

These Guys Will Hack Your Phone to Reveal Who It's Secretly Sending Information To Geoff White (left) and Glenn Wilkinson (right). Photo by James Snell. This article originally appeared on VICE UK. Most of us don't think twice when we connect to a WiFi network or download a new app. The definitive glossary of hacking terminology We live in an era of unprecedented cyberattacks, where malicious campaigns, both personal and governmental, are carried out across laptops and wireless networks. Even if you are not technically minded, your day-to-day life is still probably pretty crowded with stories about hacking, whether you recognize them as such or not. Have you ever installed an antivirus tool on your computer? Read a story about WikiLeaks or the Arab Spring?

Painfully Computer Pranks ~ Computer Hacking Computer pranks to freak out your friends and make them crying for mummy I've been posting many articles about computer pranks on this blog (Deadly Virus Prank, The Ultimate Virus, How to Create a Fake and Harmless Virus and Facebook Virus Prank). Today , I will show you 5 great computer pranks that will frustrate your victims very much. The Best Hacking Tutorial Sites - Learn Legal Hacking written by: Daniel Robson•edited by: Aaron R.•updated: 2/13/2011 Whether it's to understand potential attack vectors or simply for the fun of it, learning the basics of hacking is something that a lot of people aspire to. Here's our list of the top tutorial based hacking sites. Introduction Films like Swordfish and Hackers have made hacking seem cool, a lifestyle choice almost.

How Hackers Protect Themselves From Getting Hacked When Adrian Lamo goes online, he leaves nothing to chance. To log in to personal accounts, he uses a digital password generator -- a plastic key chain-like device that displays a new string of digits every 60 seconds. He adds an extra layer of security to some accounts by entering a special code that he receives via text message. How to use Google for Hacking Google serves almost 80 percent of all the search queries on the Internet, proving itself as the most popular search engine. However, Google makes it possible to reach not only the publicly available information resources, but also gives access to some of the most confidential information that should never have been revealed. In this post, you will find the information on how to use Google for exploiting security vulnerabilities that exists within many websites. The following are some of the ways to use Google for hacking: 1.

Top 15 Open Source/Free Security/Hacking Tools 1. Nmap Nmap (“Network Mapper”) is a free and open source (license) utility for network discovery and security auditing. Nmap uses raw IP packets in novel ways to determine what hosts are available on the network, what services (application name and version) those hosts are offering, what operating systems (and OS versions) they are running, what type of packet filters/firewalls are in use, and dozens of other characteristics. Nmap homepage. 2. Phone hacking Phone hacking is the practice of intercepting telephone calls or voicemail messages, often by accessing the voicemail messages of a mobile phone without the consent of the phone's owner. The term came to prominence during the News International phone hacking scandal, in which it was alleged (and in some cases proved in court) that the British tabloid newspaper the News of the World had been involved in the interception of voicemail messages of the British Royal Family, other public figures, and the murdered schoolgirl Milly Dowler.[1] Risks[edit]

Computer acting funny? It may be infected with a virus! One great thing about computers is that they often warn us when something is wrong. Sometimes they suddenly slow down to a crawl, other times they start to freeze up or even crash for what seems to be no reason at all. Most of the time though, there is a reason why our computers start to act funny. One of those reasons is due to malware and viruses. CELL PHONE HACKS Since the popularity of text messages have significantly increased during the recent years, it has also become a popular channel for most people to exchange secret messages and engage in dubious activities. These text messages can Read More Are You Looking to Track Someone’s Cell Phone? Relax, Here is a Complete Tracking Guide!

How to View Passwords Hidden Under Asterisks [Video] Google Chrome, Firefox and other browsers hide passwords behind asterisks but you can easily view the saved passwords using the built-in developer tools. Web browser hide passwords under asterisk characters for improved security. Say you are on the Gmail login page and the web browser, as always, has auto-filled the username and passwords fields for you. This is convenient because you can sign-in to your account with a click but because you have not been typing these saved passwords for a while now, you don’t even remember the Gmail password anymore.

Less Popular Google Search Tips There’s not a day that passes by without searching for information on Google. We’re pretty sure that you’re aware of some advanced Google search operators like AND, NOT, etc. but here are some lesser known tricks that you can implement when you’re searching on Google. We bet you wouldn’t know at least one of these! 1.