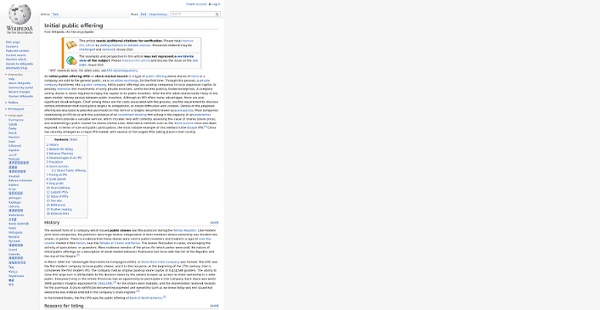 History[edit] In March 1602 the “Vereenigde Oost-Indische Compagnie (VOC), or Dutch East India Company was formed. The VOC was the first modern company to issue public shares, and it is this issuance, at the beginning of the 17th century, that is considered the first modern IPO. The company had an original paid-up share capital of 6,424,588 guilders. The ability to raise this large sum is attributable to the decision taken by the owners to open up access to share ownership to a wide public. c1783.[5] c1783.[5] Reasons for listing[edit] Advantages[edit] When a company lists its securities on a public exchange, the money paid by the investing public for the newly issued shares goes directly to the company (primary offering) as well as to any early private investors who opt to sell all or a portion of their holdings (secondary offering) as part of the larger IPO. An IPO accords several benefits to the previously private company: Disadvantages[edit] Procedure[edit] Advance planning[edit] Related:  investing

Millionaires bet on space travel Closer to a space vacation? CNBC's Jon Fortt and Jane Wells run down today's hot topics, including space travel, e-cigarette promotion in the U.K. and the maker of "Candy Crush" files for an IPO. Knight Frank also noted the rising trend for investing in space research, be it space travel or asteroid mining. The estate agent said it had identified 70 "wealthy individuals", with a combined wealth of over $200 billion, who are targeting the growing space sector. (Read more: Precious metal hunters look to outer space) Bailey told CNBC that increasing numbers of wealthy individuals — defined in Knight Frank's report as those with at least $30 million in investable assets — had shown interest in the space industry over the last 12 months. "This is a risky sector," Bailey said. According to Space Affairs, established in 2000 as the "world's first commercial space agency", suborbital space flight will be a possibility for both businesses and tourists within years, rather than decades.

Making Money in Outer Space (AMZN, BA, GOOGL, RTN) In the 1981 film Outland, Sean Connery stars as an old-school lawman who keeps order in a mining colony on one of Jupiter's moons, armed only with his wits and a trusty Browning 2000 shotgun. Outland is set in a future that has commercial space travel and off-planet mining, and the latter took a giant leap forward into reality last week when the private company Planetary Resources announced its plan to start mining asteroids in just more than 10 years' time. While the space industry isn't easily accessible to private investors, its prospects mean that one day the sector will become the toast of the stock market. So it's something I keep an eye on, as I believe it will present some great opportunities in the future. Money from satellitesA few public companies have major interests in space, and the one that immediately springs to mind is the satellite communications specialist Inmarsat. But so far the space industry is pretty much limited to satellites and getting them into orbit.

Space Investments | Space Ventures Investors Space Investments, through space funds, space stocks, crowd-funded and private investor placements, will be the enabler of the next Space Race. Space 2.0, NewSpace, and Commercial Space, are the current terms for the next Space Race, and like any feat of exploration, the best rocket fuel is finance. Space Ventures Investors is currently developing a range of space industry financial products to enable private investors and institutional investor to actively invest in space. Is Space an Emerging Market? As a growth industry, the dot.com boom and digital revolution will be superseded by the grandeur of space. The history of space is that it was born from Cold War conflict, and as the Cold War cooled so did the space race.

Mining the moon will become a viable venture As space-based commerce dawns, an ambitious few want to mine the Moon and near-Earth asteroids for precious metals and more. In May last year, a spacecraft called Dragon made history. Developed by Space X, a California-based private space transport company, the craft became the first commercial spacecraft to ferry cargo between the International Space Station and Earth. With Nasa scheduling a third re-supply mission for 9 December this year, the craft proves that a private space business can succeed. But for many more, commercial space transport is only the beginning. 'We're opening up a whole new world to humanity that has abundant resources that will help project us into a multi-planet species,' says Bob Richards, chief executive of lunar lander developer, Moon Express. Richards heads up one of a growing band of new and ambitious private organisations that are very serious about mining the 'Moon or mining asteroids. Metal mining Fly me to the Moon Beyond the Moon Critical resource

List of companies for inquiry Public Space Companies Publicly traded space companies are developing technology that will help make space settlement possible. You can contribute to the space settlement effort by investing in these companies (by purchasing stock) and/or lobbying Congress for favorable legislation. U.S.-based public companies involved in space-related activities include the following. Besides these publicly traded companies, there are many privately held corporations (e.g., Bigelow Aerospace, SpaceX) engaged in space activities or that are not traded publicly for other reasons. ALCOA Inc. As in any industry, space companies come and go. If you know of a space company missing from the list that you feel should be included, please Contact Us and let us know. Note: all investing must be done at the investor's own risk. Read about a way to make private space development potentially very profitable, without depending on government funding.

3 2 1 3 Publicly Traded Stocks for a Private Space Race It’s amazing how a simple signature in Washington can cause an explosion in innovation. No, I’m not talking about new legislation – but rather, the loosening of federal oversight to finally allow in private enterprise and free-market influences. Consider a seemingly arcane move in 2000, made by President Clinton, to change Global Positioning System data from “selective availability” to public record. That simple move opened the floodgates to spawn an entire consumer technology industry for GPS systems. Bill Clinton probably never expected cars to have on-board GPS systems or phones to be able to literally direct us to the nearest coffee shop. As the space shuttle Atlantis returns to earth this week and closes the curtains on government-sponsored space flight and two decades of NASA’s shuttle program, we may be faced with a new market-changing shift: the push towards privatized space programs. So which picks are the biggest players?

Are There Fortunes To Be Made In Asteroid Mining? | Precious Metals More than 900 new asteroids that pass near Earth are discovered every year. They can be like the Iron Range of Minnesota was for the Detroit car industry – a key resource located near where it was needed. In this case, metals and fuel from asteroids can expand the in-space industries of this century. That is our strategy. – David Gump, CEO of Deep Space Industries Deep Space Industries made news in January by announcing plans to begin space prospecting, setting in motion its goal of mining asteroids for resources. Is such a business feasible? The Market for Asteroid-Mined Resources Deep Space Industries' First Promotional Image Many near-Earth asteroids contain iron, nickel, titanium, platinum, water, oxygen, and hydrogen. Deep Space plans to use iron, nickel, and titanium for in-space construction projects. The biggest initial market for propellant in space would be in communication satellites. That was 17 years ago . The Competition Obstacles